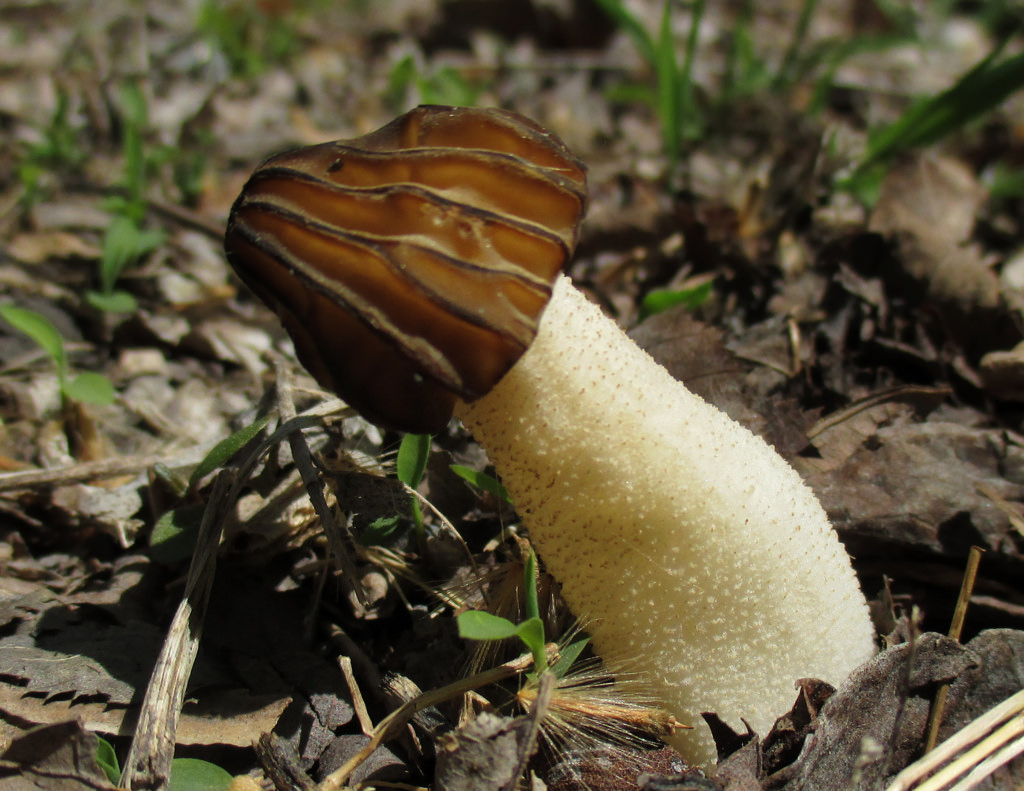 The Morels of the genus Morchella are some of the finest edible mushrooms that grow throughout North America and Europe. Morchella punctipes, or the Half-Free Morel, is one such mushroom of this genus that usually appears in spring.[i]

What is with the half-free? Well, the species which are termed Half-Free Morels have only the top half of their caps attached to the stem with the bottom half draping over, which differentiates them from true morels.

The name “punctipes” means spotted(puncti) stem(pes). This was the name applied by the mycologist Charles Peck when he observed that the North American samples of Morchella semilibera contained small conical projections from their stems, whereas the samples from Europe were smooth stemmed. Although his hypothesis was not completely corroborated, his idea that North American and European species of half-free morels were actually distinct species would later be proven true.[ii]

The taxonomy of half-free morels in America and Canada has quite an interesting history. In North America, all half-free morels used to be referred to as Morchella semilibera until quite recently. Nearly a decade ago morels underwent a taxonomic revision due to newly uncovered DNA evidence. This evidence suggested that Morchella semilibera was a distinct species of half-free morels that was only found across the pond, in Europe. While the half-free morels of North America, although practically non-differentiable based purely on physical characteristics, were two distinct species growing in different geographic locations. Morchella punctipes growing in hardwood forests east of the Great Plains, and Morchella populiphila growing under black cottonwood trees – Populus trichocarpa hence the name – in northwestern North America.[iii]

Cap: In dimensions, the cap is 2-4.5 cm in height and 2-4.5 cm in width. It is mostly conical but sometimes maybe dome-shaped or nearly convex. As mentioned, only the top half of the cap is attached to the stem, while the bottom half drapes over the stem like a skirt and fans out, making its width almost equal to its height. Visually the outer surface of the cap looks honeycombed with a network of vertically arranged ridges and deep pits. While the half-free morel is young, the cap possesses flattened, tan ridges and white to pale yellow pits; but as it ages the ridges turn sharp and darken, becoming brown or black; while the pits take on a more yellow to brown appearance.
Stem: The stem is mostly cylindrical and roughly 1-4.5 cm wide. While the Morchella punctipes is young, the height of the stem is quite short at 1.5cm and may not even be visible as it may hidden under the cap; but as it matures the stem grows significantly and can reach lengths up to 15cm. With regard to color, it is often white to light watery brown. In humid and moist conditions, the stem often becomes inflated towards the base and develops longitudinal corrugations. Additionally, some specimens of Morchella punctipes can be found to have small, gritty projections which often match the stem in coloration but can darken as the half-free morel ages; while other specimens can be completely smooth stemmed. Internally, the stem is completely hollow from the cap to the base.  As a side note, due to the long stem and comparatively short dome-shaped cap, many people in the Midwestern United States refer to half-free morels as “peckerheads.”
Spores: The spores, when visualized microscopically, are smooth and ovoid; and can be found inside the pits of the cap.
Spore print: This half-free morel has a cream to yellowish spore print, which is difficult to visualize.
Flavor and Edibility: Half-free morels are among the most edible mushrooms and are definitely worth adding to rich buttery or creamy dishes. Although, when compared to its yellow and black morel cousins, the flavor of the Morchella punctipes is milder.
Habitat and Range: Morchella punctipes often appear earlier than other morels. It can first be seen scattered throughout hardwood forests east of the Great plains and the Rocky Mountains, starting from late March in southern regions and late May in northern regions.

The most frequent confusion arises between differentiating Morchella punctipes from its black (Morchella angusticeps) and yellow (Morchella esculentoides) morel cousins thanks to their similar colorations. The best way to differentiate between these species is to observe the caps. The caps of the black and yellow morels are usually larger and their bottom halves are often fused to the stem instead of skirting over, as seen in the half-free morel.[v]

Another species of mushrooms that resembles Morchella punctipes are the poisonous False Morels, Gyromitra caroliniana and Gyromitra brunnea. Fortunately, these too can be differentiated by taking a look at the cap and the stem. The cap of Gyromitra species is more reddish in color, is attached only at the top of the stalk and has comparatively poorly defined corrugations. Additionally, the stalk of this poisonous false morel species is dense instead of hollow. [vi]

Morchella punctipes is completely safe to consume, however older specimens which can be darker in color may be confused for the black morel (Morchella angusticeps). The black morel species is reported to be associated with gastrointestinal upset, especially if consumed with alcohol. [vii]