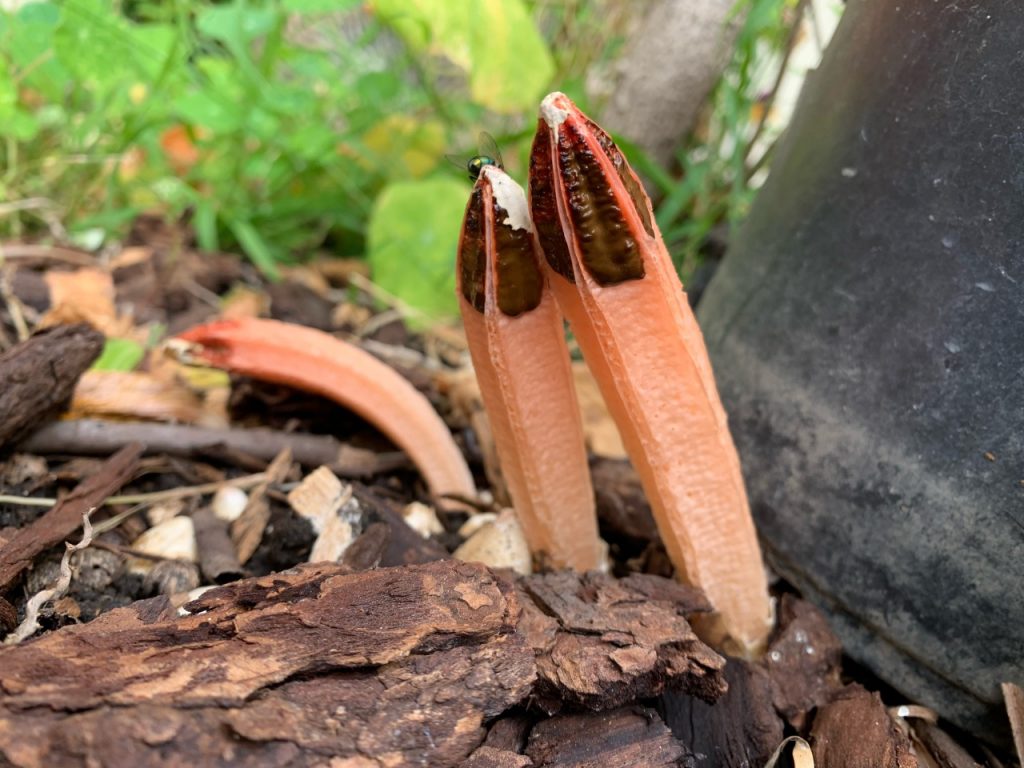 Lysurus mokusin, often known to most as the lantern stinkhorn, ribbed lizard claw, or the small lizard claw, is a rather unique stinkhorn mushroom with a very peculiar appearance.  This rather large, pink to reddish-orange mushroom is most recognizable by a well-developed stem that is squared off into angular corners and by a head that is composed of four to five “claw” arms that clasp at their apices to form a spire which, like almost every other stinkhorn, is covered by a gelatinous, foul-smelling, spore mass called the gleba. [i]

Lysurus mokusin is special from a taxonomic point of view as it represents the earliest known scientific record of a fungus from China. It was first found in China, near what is now Beijing, in the 1770s by a French Jesuit missionary Pierre-Martial Cibot and its first description, under the name Phallus mokusin, was published in the New memoirs of the Imperial Academy of Sciences in St. Petersburg. It was not until the 1820s, that the notable Swedish mycologist Elias Magnus Fries reclassified this species under the genus Lysurus and renamed it “Lysurus mokusin” during his extensive systematic classification of fungi.

Mature Fruiting Body: As mentioned, the mature fruiting form composed of a stalk and a head will emerge from the “egg” after tearing open its outer wall or the peridium.

Stalk: The stalk of Lysurus mokusin emerges from a white, membraneous volva that is anchored by white mycelial cords. The shaft of the stalk is spongy, soft, and hollow, and is star-shaped in cross-section. The star shape is produced by indentations into the stalk that are produced by four to six ridges with concave, pocketed grooves in between them that run vertically from the volva to the head. The stalk measures 7 to 15 centimeters in height and 1 to 2.5 centimeters in thickness. The color of L. mokusin’s stalk can vary between white, pink, and red, but most specimens are pink to reddish-orange.

Head/“cap”: The head is produced by the cranial extension of the stalk’s vertical ridges, these ridges in the head region become the “claws” or “arms”. As these “claws” approach the top of the mushroom, they fuse angularly at their apices creating a cylindrical tip and forming a fusiform or lantern-like shape of the head. Similar to other stinkhorns, the concave grooves in between the “arms” are coated in gleba, which is a dark brown spore mass that smells akin to “rotting flesh” or “fresh dog feces”. The head measures 1–2 centimeters in height and 1–2 centimeters in thickness.

Something worth noting! The fused “arms” at their tips forming the head of Lysurus mokusin is often listed as a “differentiating feature” for this species as other similar species often have non-fused arms. However, with age, these arms may become separated.

Spores: The spores are embedded in the foul-smelling olive-brown slime that coats the concave grooves of the head. They measure 3.5-4.5 by 1-1.5 µm, are oblong-cylindrical in shape resembling sausages, and are smooth and thin-walled. If treated with potassium hydroxide (KOH), spores appear hyaline to yellowish.

Smell: Similar to its other stinkhorns relative, Lysurus mokusin too has a strong, distinctive strong odor resembling rotting flesh, sewage, or dog feces. The strong odor functions as an attractant to flies and other insects. As these insects land on the slimy gleba,  spores attach to their legs and are then dispersed as they fly away.

Although the strong odor is distinctive for all stinkhorns, it is worth noting that immature stinkhorns in the egg stage as well as older specimens that have had all of their spore layer stripped may lack a scent. As such it is not always necessary to encounter a foul smell when tracking stinkhorns.

Edibility: The edibility of Lysurus mokusin is debatable. According to certain mycological literature, the immature “egg” form of this species is edible and even considered a delicacy in China. However, the mature form is not considered edible. We would suggest not eating Lysurus mokusin.

Habitat: Lysurus mokusin has a saprobic relationship with its surrounding habitat, recycling dead or decaying organic matter and as such is quite beneficial to the environments in which they are found. They can be found growing alone or gregariously most commonly in urban environments such as gardens, lawns, parks, and such.

Range: Lysurus mokusin is native to Australia and is thought to be an invasive or an alien species in North America and elsewhere. It is frequently found in Australia, New Zealand, surrounding pacific islands, China, Korea, and Japan. This species is rare in Europe. In North America, L.  mokusin is most commonly found in the state of California (Southern California and Central Valley). Specimens have also been reported from Maryland, Missouri, Georgia, Virginia, Alabama, South Carolina, North Carolina, Louisiana, and Florida, as well as from Texas, Kansas, and Oklahoma.

Fruiting Season: This mushroom fruits during the warm months. Therefore, the fruiting season depends on geographic location. In North America, it most commonly fruits during the summer months, whereas in warm tropical and subtropical environments of Australasia and Southeast Asia it may very well fruit year-round.

Lysurus cruciatus and Lysurus borealis are also similar species to Lysurus mokusin. They can be differentiated from L. mokusin by the absence of apical fusion of “arms”. However, keep in mind that older specimens of L. mokusin may flare and not demonstrate the “characteristic” fusion at the tips.

In Chinese medicine, Lysurus mokusin has been used for the treatment of gastric and duodenal ulcers.