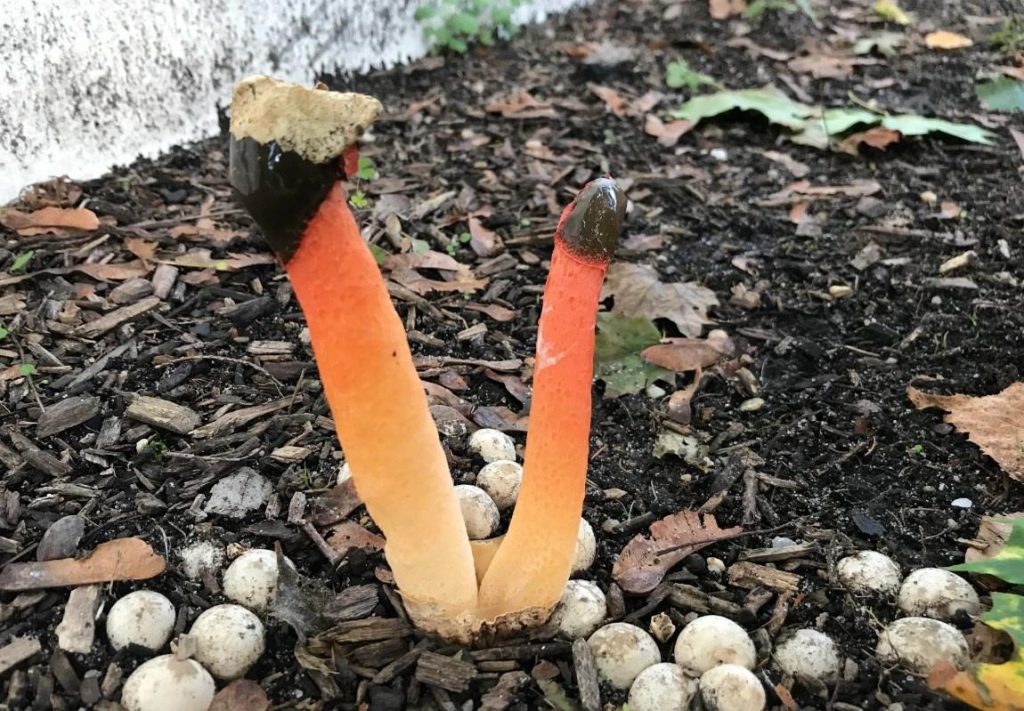 Phallus rubicundus is a member of the stinkhorn family that is characterized by an orangish-red phallic stalk on top of which sits a well-separated conical cap covered in a foul “rotting meat” smelling olive-black spore slime. [i]

This species was first described in South Carolina by the French botanist Louis Augustin Guillaume Bosc during the early 19th century. He however gave the species the name Satyrus rubicundus. It was not until 1823 that the notable Swedish mycologist Elias Magnus Fries, notable for his systematic classification of fungi, reclassified it as Phallus rubicundus. Uncommonly, P. rubicundus may be encountered under the names of Ithyphallus rubicundus and Leiophallus rubicundus in some older mycological literature.[ii]

As for the etymology of “Phallus rubicundus”, it is rather straightforward. The generic name of “Phallus” dates back to Linnaean times and is a reference to the phallic appearance of this specie’s  orangish-red stalk. While the epithet of “rubicundus” is Latin, as in rubicund, referring to the ruddy healthy reddish, or sanguine color of P. rubicundus’ stalk.

Immature Fruiting Body: The immature fruiting body of Phallus rubicundus is a white egg-shaped mass that can measure up to 2.5 centimeters in diameter and has a strand of white root-like aggregations of mycelium at its base. Sometimes multiple fruiting bodies can occur together and appear as a cluster of smaller “eggs”. These egg shaped-masses when cut open reveal a gelatinous core encasing the body of the immature P. rubicundus.

Mature Fruiting Body: The mature Phallus rubicundus will emerge from the “egg” mass by tearing open its outer wall (peridium). The mature fruiting body will consist of a cylindrical stalk which initially stands erect and then shrivels and sags as well as a well-differentiated cap that is covered by a gelatinous spore slime.

Cap: The cap measures approximately 2 to 3.5 cm in length and is attached to the top of the stem, but remains well-demarcated. It is mostly conical in shape and has an apical perforation. The surface is mostly covered by an olive-black gelatinous spore mass termed the “gleba”, but underneath the olive-black slime layer, the cap is pink to red and has a smooth or slightly wrinkled texture.

Stalk: The stalk is cylindrical, hollow, and measures approximately 1.5 centimeters in diameter and 6 to 15 centimeters in height. The base of the stalk is enclosed in an earth-stained volva/universal veil which is the remnant of the immature fruiting body encasement. The stalk is orangish-red when young, but fades to a light orange color with age.

Spores: The spores are embedded in the foul-smelling, olive-black gleba that coats the cap. They are elliptical, smooth, yellowish in color, and measure 4-5µm by 2-2.5µm. Spores are hyaline in potassium hydroxide (KOH).

Smell: As this species is a “stinkhorn”, it is notable for its foul “rotting meat” smelling odor, which comes from the gelatinous olive-black spore layer. The smell functions as an attractant to flies and other insects, causing them to land on its slimy cap, and carry off its sticky spores wherever they go.

Word of caution: Although the smell is typical of stinkhorns, it is not necessary for one to always encounter this foul order when foraging for stinkhorn. Often, when the stinkhorns first emerge from their membranous volva they lack an odor. Similarly, after some time when all insects have carried away all of the gelatinous olive-black spore layer, a stinkhorn may lose its foul smell.

Edibility: Whether or not Phallus rubicundus is unknown, as such it is best to consider it inedible. Furthermore, who would want to eat something that smells like rotting meat?

Range: P. rubicundus is most widely distributed in southeastern US states such as North Carolina, South Carolina, Kentucky, Tennessee, Arkansas, Georgia, Alabama, Missouri, Louisiana, and Florida. It can be found as far west as Texas, Oklahoma, and Colorado. Outside of the United States it has been found in Africa, Asia, Australia, and New Zealand.

Fruiting Season: The fruiting season depends on the geographic location. In the temperate climates of North America, Phallus rubicundus fruiting from spring to late fall. However, in tropical and subtropical environments it can potentially fruit year round.

Phallus rubicundus is most commonly confused with other stinkhorns.

The most frequent confusion arises between Phallus rubicundus and Phallus rugulosus, so much so that in field guides and various mycological websites these two species are often listed as the same. The confusion arises from the fact that dried samples of these two species, as well as that of Phallus aurantiacus, all have dull orange stems, and differentiating them in this state is indeed difficult. Unfortunately, mycologists most frequently study dried specimens to determine taxonomy, which has understandably led to this confusion. Fortunately, in nature Phallus rubicundus and Phallus rugulosus are relatively easy to tell apart. P. rubicundus has a red stem that is usually thicker than the skinny, orange-when-fresh stem of P. rugulosus. Furthermore, the stem of P. rugulosus contains rather unique elongated, pit-like depressions covering its stem surface.

There is no use of Phallus rubicundus in the western world, however, in Southeast Asia and Australia, this species of mushroom has been used for several purposes both in folk medicine and daily life. Certain primitive forest tribes of Australasia have used ground P. rubicundus for the treatment of Typhoid fever and labor pain. While in Southeast Asia the sticky spore lime has been used as a mosquito killer.