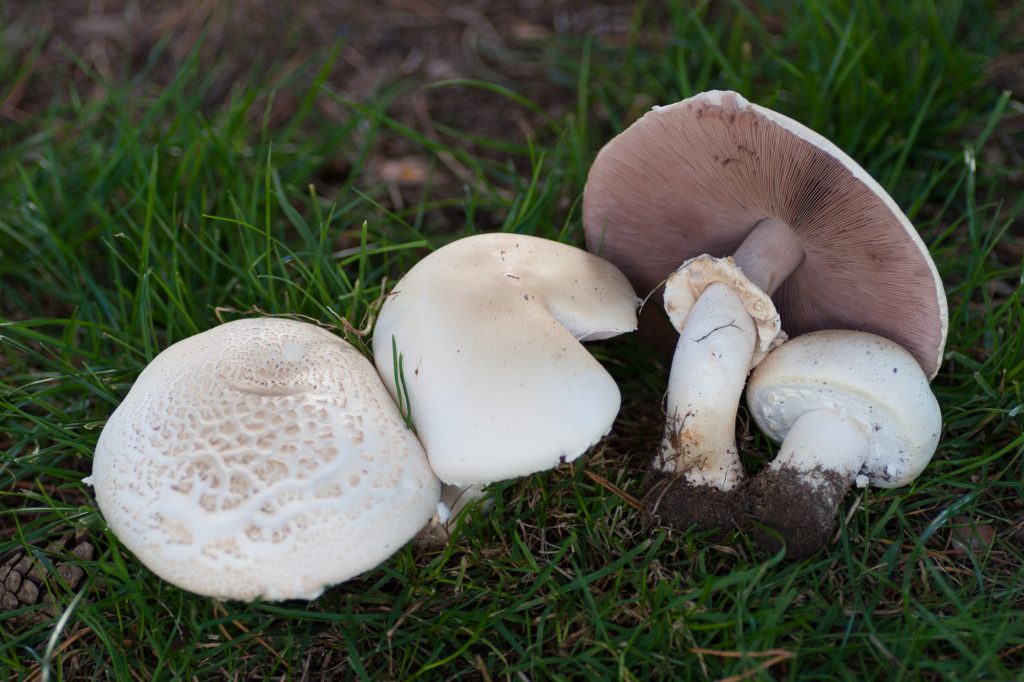 Agaricus Arvensis is a fungus of the Agaricaceae family. It is colloquially known as the Horse Mushroom. This mushroom was first described in 1762 by mycologist Jacob Christian Schaeffer. The epithet ‘arvensis’ means “of the field” or “of the meadows”, which is a reference to the habitat of the fungus. This species of mushroom can be found in grassy areas, in meadows, and near stables. They often grow in fairy rings on grass. Some can also grow in clusters of no more than two to three fruit bodies together. Nettles, colloquially known as the common nettle or stinging nettle, often grow near this mushroom.

Agaricus Arvensis is a saprobic fungus, commonly known as decomposers. Many mushrooms adopt this technique of feeding to obtain energy. This entails that the mushroom breaks down dead organic matter to obtain the essential nutrients for its growth. This species of fungus thrive in soils that are already rich in nutrients. A.Arvensis is widespread as they are robust. They can be easily cultivated and can adapt to their environment. The mushroom is present in Europe, West Asia, and North America

Agaricus Arvensis’s harvest season starts in July and lasts till October or November. In other words, the prime seasons to hunt for this mushroom are summer and fall. Mushroom hunters are avid about this fungus, notably for its unique taste. Agaricus Arvensis is edible and is considered one of the most delicious mushrooms although it does not have a distinctive taste. The smell, however, is strong and quite spicy. Many people seek the fruit bodies of this fungus to add to their dishes. However, the Agaricus species are thought to have deposits of heavy metals such as cadmium and copper in their fruit bodiesⁱ. The accumulation of these metals in our bodies can be a hazard to our health in the long run.

Agaricus Arvensis has several look-alikes in the fungi kingdom. A young specimen of A.Arvensis can often be confused with the mushrooms of the Amanita Genusⁱⁱ. The similarity lies in the physical appearance of the stem of both mushrooms. It is good to remember that the A.Genus bears around 600 mushrooms that are potent and deadly. The silver lining is that some fungi of this genus are edible. Nonetheless, novice mushroom hunters are advised not to hunt for these particular mushrooms as they have many look-alikes. It is easy to mistake a deadly mushroom for a harmless one. One way to distinguish both species is via the caps.

Some species of the same family resemble Agaricus Arvensis. One such example is the Agaricus Xanthodermus, commonly known as the Yellow Stainer or The Yellow-Staining Mushroom. It is quite common for people to be unable to differentiate between the two species of mushrooms. A. Arvensis and A. Xanthodermus both have white fruiting bodies and a flat cap when at maturity. One compelling difference between the two is that the A. Xanthodermus’ stem turns yellow immediately after cutting it at the base. The reaction is instantaneous and intense, which can be observed for only this species of Agaricus. A. Xanthodermus also has a peculiar inky or phenolic smell. Another key point to note is that A. Xanthodermus contains a toxin that triggers gastrointestinal upsets in a few people. Sweating and flushing also accompany stomach cramps. Nonetheless, some people experience little to no ill effects after consuming the mushroomⁱⁱⁱ.

Like A. Xanthodermus, there are other mushrooms from the same family that share similar traits with the Agaricus Arvensis. Such examples include Agaricus Silvicola and Agaricus Campestris. A. silvicola’s light-cream cap and yellow ochre color when bruisedⁱⱽ remind of its Arvensis counterpart. For these various reasons, A. silvicola is a common look-alike of A. arvensis. As to A. Campestris, also known as the field mushroom, it is identical to. A. Arvensis. The fruit bodies of both species look alike. The only difference between the various species of Agaricus lies in the microscopic characteristics of the mushrooms. One good point is that A.Silvicola and A.Campestris are also edible. This implies that there is no consequence if one species is mistaken for the other.

The benefits of  Agaricus Arvensis mushroom are numerous. From an ecological perspective, this species of mushroom plays a vital role in the ecosystem through its feeding process. As with many saprobic mushrooms, the Agaricus Arvensis mushroom is capable of transforming organic waste such as leaves and other vegetation into valuable resources. Through this process, the mushrooms release various nutrients into the soil, which in turn help the surrounding plants to grow. This is the key to true sustainable agricultural practices. Natural decomposers also improve the soil structure and composition. As a result, plants and crops grow faster and produce larger yields. It also acts as a natural waste disposal system. The mushroom uses up all the dead organic matter that could take considerable time to decompose on its own.

Agaricus Arvensis also shows potential for the production of reducing sugars from its cellulosic biomass. The cellulase of the mushroom acts as an enzyme source for the saccharification of wood biomassⱽ. This process releases a lot of fermentable sugars. This sugar can be further used to produce bioethanol and other derived green products. While for most laymen this might seem like a small feat, this study paves the way for sustainable biorefinery. It allows new design ideas for material preparation and the utilization of energy in the biorefinery industry to emerge. The merging of this technique with other existing technology can improve the refining process of sugars into other products. The implications of this study have not been defined yet and the scope of the benefits remains unknown, but the results seem promising for the biochemical industry.

Another promising benefit of Agaricus Arvensis is the role it plays in enzyme immobilization. According to a study, the enzyme β-1,4-glucosidase (BGL) secreted by the mushroom, was covalently immobilized onto silicon oxide nanoparticles with an immobilization efficiency of 158%ⱽⁱ. This is no mean feat. The numbers are quite indicative of the potential of the substances extracted from the mushroom in diverse areas of biology and chemistry. Given that enzyme immobilization is a prominent practice in food production and medicine, this study might suggest that this species of mushroom has immense untapped potential in those fields as well. This could translate further into commercial uses as there are a host of benefits to enzyme immobilization.

The Agaricus Arvensis mushroom does not have any medicinal properties despite its various benefits. Therefore, there is no dosage when it comes to the consumption of the fungus.

Agaricus Arvensis is well sought after by many connoisseurs and amateur mushroom hunters across Europe and North America. The mushroom has been used as a delicacy for many years, and there have been no reports of toxicity so far. In addition to this, the substances found in the mushroom do not interfere with the efficiency of any medical drugs.

This species of mushroom is thought to be safe for consumption. As of today, it does not trigger any side effects or other reactions in people. However, some individuals might be allergic to the substances found in the mushroom. In that case, medical assistance should be sought immediately to receive the necessary treatment.

This particular species of mushroom has many look-alikes, some poisonous, and others harmless. Consequently, it is best for mushroom experts to do the hunting. This way, there is no risk of accidental poisoning.