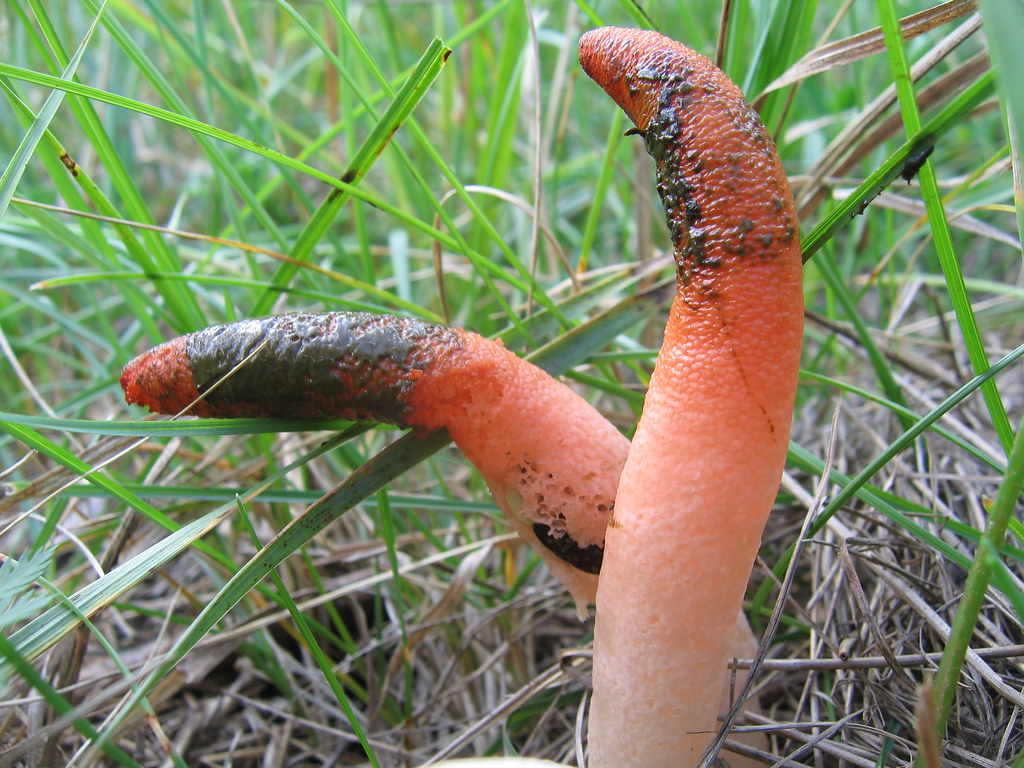 Mutinus Elegans, also known as The Elegant Stinkhorn, The Headless Stinkhorn, The Dog Stinkhorn, and The Devil’s Dipstick, is a fungus of the Phallaceae family. This family of mushrooms is colloquially known as the stinkhorn family. The species was first encountered in North America in the year 1679 by John Banister, a missionaryⁱ. Later, the mushroom was given a scientific description by the French scientist Jean Pierre François Camille Montagne in 1856. The taxonomy of the species changed over the years to finally become Mutinus elegans.

This name derives from a fertility god from early Roman times, Mutinus Titinus, whose goodwill was sought by women for conception. The Greek god Priapus (the adjective priapic means to use the phallus as a symbol) was believed to have been the source of the Mutinus cult in early Rome, which placed a special focus on phallic worship. It was also considered responsible for the fecundity of ewes, thus establishing the phallic association between Pan and Priapus, one of the regional names for the god Pan. The use of the name of the genus as a reference to the phallic shape of the stinkhorn fungus ties it to the god of fertility. Also, Elegans is a Latin word that means elegant.

This species of mushroom has a distinct appearance, like many other species of the same family. The fruit bodies of a young mushroom are egg-shaped and white. They are also partially submerged in the soil. As they grow, the egg-like structure ruptures to unravel the spongy stalk which is also the reproductive organ of the mushroom. The remaining egg-looking structure forms a volva at the bottom of the mushroom fruiting body. Mature Mutinus Elegans is recognizable by the orange color of its stem and pointed tip. The stem can also be straight o slightly curvedⁱⁱ.

Mutinus Elegans is a saprobic mushroom, a natural decomposer, that feeds on dead leaves and woody debris. They are commonly found in farm areas where the soil is enriched with manure and also in gardens. Their habitat of predilection comprises wood logs and decayed stumps. They also thrive in leafy debris, mulch piles, rotting wood, and fields. The species also commonly grows in landscaping mulch. This species has a marked presence in Japan, Europe, and eastern North America. The fruiting season of Mutinus elegans is very short and occurs in November and December. In addition, Mutinus Elegans has an unusual way of dispersing its spores. Most of this species’ life is spent as a symbiotic network of fungi (mycelium) that breaks down soil or rotting mulch. Upon reaching reproductive maturity, the “stinkhorn” appears above ground. Hence, the stem is covered with a putrid green or brown slime that attracts flies and insects which then help in the dispersion of the spores wherever they go.

As with many mushroom species, this species is widespread in eastern North America and the Midwest, mainly in Ontario, Minnesota, Texas, and Florida, but it is also found in temperate Europe and Hawaii. Some of the original illustrations and described collections of the fungus are from Illinois, Iowa, Oklahoma, and Virginia.

As to the edibility of Mutinus Elegans, opinions vary. The mushroom is edibleⁱⁱⁱ but not recommended. The species is not poisonous, contrary to popular beliefs. Nonetheless, a young specimen, which begins as an egg-like structure, is eaten more frequently than the mature mushroom. At that stage, the fruit doesn’t smell strong and is reported to be quite tasty and edible. If you wish to try eating stinkhorn eggs, you must consult a mushroom expert, since the Deadly Amanitas also produce an immature egg stage. It is easy to confuse these two mushrooms when they are at this stage of growth. On a positive note, they can sometimes be found in canned form in Asian grocery stores. Moreover, Mutinus Elegans has no distinctive taste but has a strong fetid and repulsive odor.

Cap: no cap; has only a stalk
Gills: no gills present
Stem: white and egg-shaped when young; 2 to 3 cm by 1 to 2 cm for the immature specimen; 1 to 15 cm long in fully grown fruit bodies; 1.5 to 2 cm thick; hollow and wrinkled; cylindrical; narrow apex; small opening at the tip; bright orange to yellow-orange; covered with a gleba at the top; can darken to red; sack-like volva at the base
Flesh: white when young; yellow to orange when mature
Smell: a fetid smell; repulsive smell
Taste: no distinctive taste; absorbs other flavors
Spores: 4–7 by 2–3 µm; oblong or elliptical; smooth; often with two tiny polar droplets
Spore color: brown to olive-brown spore slime
Edibility: edible but not recommended; immature specimens can be eaten
Habitat: soil rich in manure; gardens; farm areas; wood logs; decayed stumps

Owing to its unique features, Mutinus Elegans does not have many look-alikes in the fungi kingdom. However, some other species from the same family vary closely in appearance with Mutinus elegans. Mutinus caninus, also known as the dog stinkhorn, is a close relative to M. elegans. While the physical characteristics of M.caninus is quite similar to M. elegans, it has some distinct features of its own. Mutinus caninus is smaller and has a curved stalk. It retains its immature egg-like structure, which later gives a layer of protection to the mature mushroom. One difference between Mutinus Elegans and Mutinus Caninus is the smell. Some people describe M. caninus as smelling like cat fecesⁱⱽ. However, recent research suggests that Mutinus elegans and Mutinus caninus are of the same species. Also, M. caninus occurs less frequently in nature than Mutinus Elegans. Mutinus caninus is not considered edible.

Another common look-alike of Mutinus Elegans is Mutinus Ravenelii, also known as the Ravenel’s red stinkhorn. While Mutinus Ravenelii shares the same outer appearance as M. Elegans, some differences set them apart. For instance, Mutinus Ravenelii has a less tapered stalk, and a swollen head compared to its M.elegans counterpart. Other differences on the microscopic level can be seen between the two species. The contrast is subtle, but it can still be identified through the lens of a microscope.

Mutinus Bambusinusⱽ is another common example of a look-alike of Mutinus Elegans. M.Bambusinus has a dark red stalk underneath the layer of spore slime. The rest of the stem is pinkish-white or sometimes red. Its stem is very narrow and pointy, unlike M.Elegans, which might have a curved stalk. Also, the mushroom has a perforated slime-less apex. However, it is often of the same shape and size as M.Elegans. Other similarities with the M.Elegans fruit bodies include the foul smell due to the slime. Both species are also saprobic in nature. M.Bambusinus is a species that is considered unfit for consumption. Lastly, any of the Deadly Amanitas (Amanita Bisporigera, Amanita Phalloides) can be considered look alikes as in their egg stage they can be confused easily confused for Mutinus Elegans.  This is why most people do not eat Stinkhorns and it is recommended not too.

As with any saprobic fungi, Mutinus Elegans helps to improve the structure of the soil, thereby favoring the growth of plants. When the natural decomposers feed on dead organic matter, they release essential nutrients into the soil. These nutrients are, in turn, taken up by surrounding plants. Mutinus Elegans thus play a pivotal role in the ecosystem. Along similar veins, M.Elegans often grow in landscaping mulch. While they may seem unattractive, they are very valuable to gardens because they break down the mulch to make nutrients readily available to plants. This leads to a decrease in the use of harmful fertilizers that may damage the environment.

A study performed by extracting the mushroom’s bioactive substances demonstrated potential antibiotic properties of the Mutinus Elegans speciesⱽⁱ. During the laboratory experiments, the mushroom demonstrated good capabilities to inhibit the growth of certain pathogens. That is to say, Mutinus Elegans might be a potential antibacterial and antifungal treatment. Hence, M.Elegans could contribute to the pharmaceutical industry and the production of new medicines against harmful microorganisms.

Some people also think that there is also a possibility of using stinkhorns as a palliative medication for a variety of conditions. As a cure for rheumatism, if carried as a talisman, they are said to fight ulcers, gout, epilepsy, and epilepsy. None of these assertions can be substantiated by credible medical evidence. However, the belief is still present in the culture and tradition of certain groups of people.

Mutinus elegans does not have any medicinal uses. Thus, there is no dosage applied. It is recommended not to consume Mutinus elegans mushrooms at all.

Although Mutinus elegans is edible, it is not recommended for consumption. This is because little is known about the toxicity of the mushroom. Consequently, the mushroom might have side effects that are still unknown to humans.

For this reason, it is advised not to eat this species of mushroom or to hunt for immature specimens which are safer to consume.

Little scientific data is available on the interaction of the mushroom with other pharmaceutical drugs. Therefore, no inference can be drawn about how harmful Mutinus elegans might be to someone on medication.