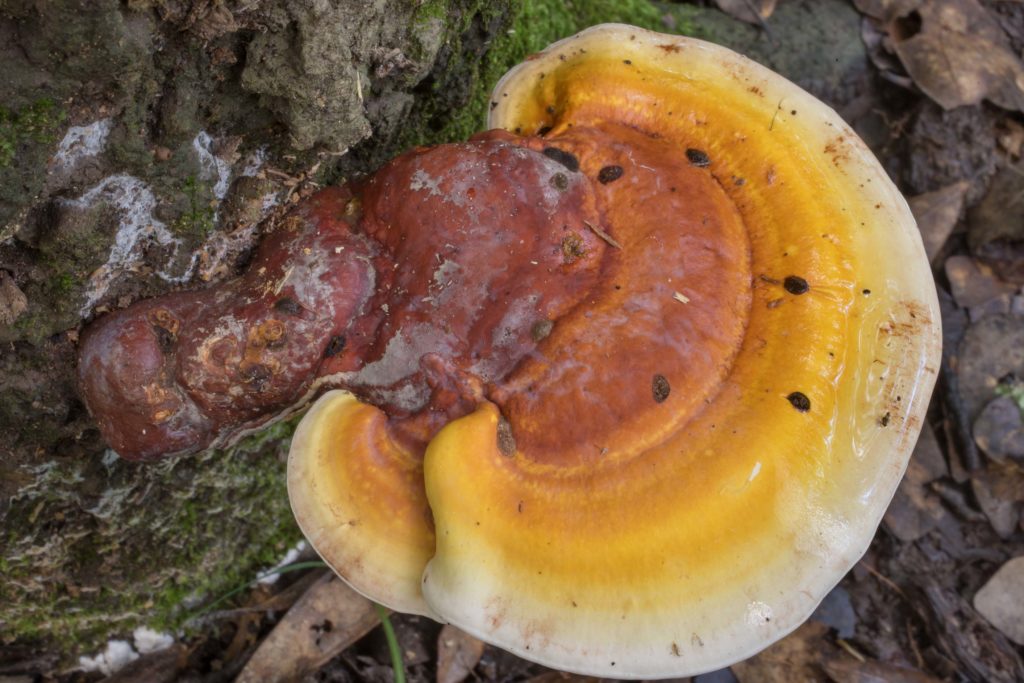 Ganoderma curtisii is one of two North American species that used to be considered reishi mushrooms—the other is G. sessile[i]. Whether either can still properly be called reishis, and what it means if they are, is a matter of some debate.

“Reishi” is the Japanese name for an Asian mushroom celebrated in Asian folk medicine traditions for its power (although see note under Safety). The Chinese name is lingzhi, but the name reishi is now widespread among English speakers. For many years, this mushroom, and similar mushrooms in Europe and North America, bore the scientific name, G. lucidum. More recently, though, it was discovered that these fungi are not all alike and are, in fact, four different species. The G. lucidum name now applies only to the European species. The Asian version is G. lingzhi. And then there are the two North Americans.

From one perspective, there are simply five species of reishi, now (G.Oregonense, G.Tsugae, G.Lucidum, G.Curtisii, G.Sessile). There are even those who refer to all ganodermas as reishis including , since they do at least vaguely resemble each other and the group has no well-established English name. The problem is that such naming implies that the entire flock of reishis have the same medicinal value as the Asian species—and some herbalists do use these mushrooms in precisely that way[ii].

But the truth is that the jury is still out on what the biochemical properties of “other reishis,” such as G. curtisii, might be. It’s not unusual for closely related, and outwardly very similar, organisms to have very different effects.

It might be fairer to say that the reishi mushroom is G. lingzhi only, that it grows wild exclusively in Asia, and that G. curtisii ought to have a different common name.

Cap: Medium-sized to large, semi-circular or kidney-shaped, with a hard, lacquer-like upper surface with concentric zones of yellow, white, and red when young. When mature, entirely red, reddish brown, or brownish red, sometimes with an orangish or whitish edge. The surface is bald. The interior flesh is pale brown and tough but not woody.
Gills: There are no gills. The spores are released from pores on the underside of the cap. The pore surface is whitish or very light brown when young. Mature specimens have a medium brown pore surface that bruises dark brown.
Stem: If a stem is present (and one usually is), it attaches to the side of the cap, usually at an angle, somewhat like the handle of a fry-pan. It, too, is bald, some shade of red-brown, with a lacquer-like surface.
Smell: Nothing distinctive for identification purposes.
Taste: Nothing distinctive for identification purposes.
Spores: Ellipsoid.
Spore color: Brown.
Edibility: Not palatable—too tough.
Habitat: Eats mostly dead hardwoods, but can sometimes attack injured living trees as well.

G. curtisii[iii] has an annual fruiting body, not a perennial one like the woodier ganodermas, but it can fruit any time of year in warmer climates. In the cooler parts of its range it fruits any time except winter. It is fairly common east of the Rocky Mountains.

G. curtisii could easily be mixed up with G. sessile, since the two did used to be lumped into the same species and do share the same broad range. The most reliable way to tell them apart of that the former has melanoid bands but not concentric growth rings, whereas the latter has concentric growth rings but not melanoid bands. Unfortunately, checking for these features requires slicing the flesh through cleanly with a good mushroom knife. The name “sessile” does mean “without a stem,” and indeed it is usually stemless whereas G. curtisii is usually stemmed, but either species can occur in either condition.

Several other ganodermas share the lacquer-like surface of G. curtisii, but most of these either don’t share the same range or don’t grow on hardwoods. The exceptions either don’t have melanoid bands or have dark brown flesh.

The unrelated Red-Belted Conk (Fomitopsis pinicola) has a generally similar shape and color, but its flesh is woody[iv]. There are a number of non-lacquered ganodermas that vaguely resemble G. curtisii (and are sometimes referred to as reishis) but their colors differ and they, too, are woody in texture.

The problem with the recent division of the reishi into four species is that it’s hard to know which species was really involved in the various studies conducted on the potential benefits of reishi; some may have involved G. curtisii. The clinical experience of practitioners might also cover a mix of potentially different species. Commercially prepared reishi products are usually G. lingzhi, but not always[v]. So there are doubtless people who have used G. curtisii medicinally, both accidentally and on purpose, and yet there is little to no research on the medicinal value of G. curtisii itself as separate from that of its relatives.

G. lingzhi[vi] is used medicinally in Asia, and several preliminary studies suggest it could be useful in cancer treatment, immunomodulation, and diabetes treatment, among other possible applications. Few, if any, of these were clinical studies involving human patients.

G. curtisii might have the same or similar promise. It’s definitely possible, we just don’t know.

There are no general guidelines on dosage for G. curtisii. It should not be used except under the guidance of an experienced practitioner (see note on Safety).

Reishi[vii] has several known side effects, contraindications, and suspected serious risks. People using G. curtisii on the assumption that it carries the same benefits as G. lingzhi should be aware that it could also cause the same problems.

The most common side effects (though no one seems to know exactly how common these are) include dryness and itchiness in the mouth, throat, and nasal areas, nosebleeds, nausea, and bloody stools. Reishi wine (a common way of consuming the mushroom) can cause rashes. The spores trigger allergies in some people (though that is true for many mushrooms). And while unconfirmed, there is some evidence suggesting that some reishi products might damage the liver.

Reishi may also be able to lower blood pressure and reduce blood clotting, which could be medical advantages for some patients but present a real risk for people who already have very low blood pressure or a clotting disorder, people who take other medications with the same effects, or people about to have surgery.

G. curtisii might share some or all of these problems, though plenty of recognized medications have their side effects and risks, too. As long as those risks are balanced by advantages in the judgment of a qualified practitioner, products made from these fungi might still be useful.

The real danger is that since there is no research on G. curtisii specifically, we really don’t know what its risks and dangers might be.