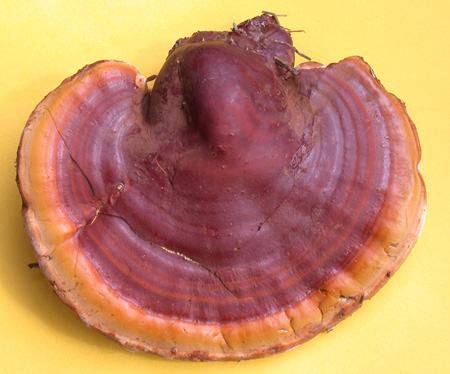 Fruiting bodies are large (typically up to 20 cm in diameter and 5 cm thick, although they may grow to be much larger) semicircular or fan-shaped, and usually sessile, although some specimens may have a small lateral stem-like attachment to its host tree. The cap surface is smooth, with a thin and brittle crust, and shines as if varnished (laccate), dark reddish brown in color, sulcate, zonate with rings distant on the surface and crowded at the margin, more or less rugose. The context is white to cream-colored, cinnamon-colored next to the pore surface, and soft.

Originally described by Murrill (1908), the distribution of this species is limited to the Pacific west and northern California, growing on conifers other than species of Pinus (Overholts, 1953). It causes a white spongy rot (Englerth, 1942), and has been shown to cause extensive delignification (Adaskaveg et al., 1990). Basidiospores are ovate in shape, with a tapering apex and slightly roughened walls, with a mean length of 13-15.5 x 7.5-9.0 µm. Pilocystidia are strongly amyloid, thick-walled long-shafted and clavate in shape, 7-12 um in diameter and with no apical projections (Adaskaveg and Gilbertson, 1988). G. oregonense has been shown be be closely related to G. tsugae and G. valesiacum by phylogenetic analysis of small-subunit rDNA sequences (Hong and Jung, 2004).

An antibiotic highly active against Gram+ and acid-fast bacteria has been isolated from G. oregonense and named “oregonensin” (Florey, 1949). Oregonensin (C20H32O8) inhibits Staphylococcus aureus growth in broth at 1.25 µg/mL, and Mycobacterium phlei at 5 µg/mL.

Atkinson GF. (1908).
Observations on Polyporus lucidus Leys and some of its allies from Europe and North America.
Botanical Gazette 46(5):321-338.