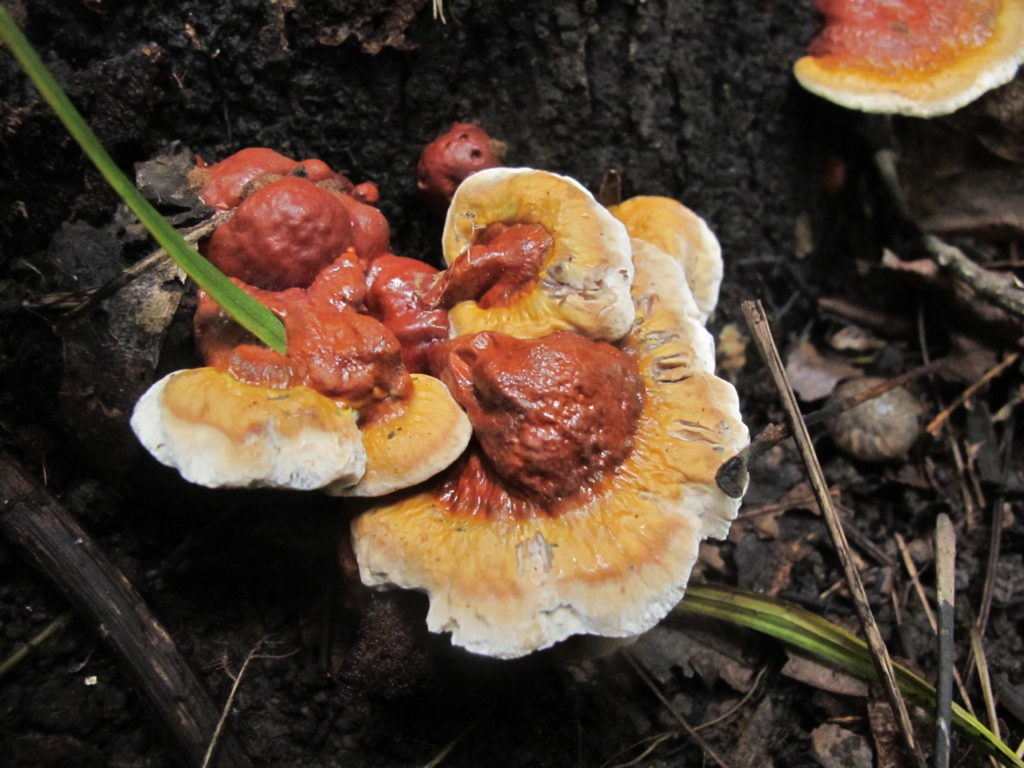 Ganoderma sessile may or may not be properly referred to as the reishi mushroom.

Reishi is a well-known and well-researched medicinal mushroom (although see note on warnings and side effects) that has recently been split into several different species; G. sessile is one of the newly-recognized species[i]. “Reishi” is a Japanese name, and the folk medicine traditions that made the reishi famous are Asian, so an argument can be made that only the Asian species should get to keep the name. On the other hand, because these mushrooms were treated as the same species for years, our common understanding of what reishi mushrooms are includes G. sessile, at least to some extent.

The fact that many people refer to all ganodermas as “reishis,” including those that do not closely resemble the Asian medicinal, does not help.

Whether G. sessile has the same biochemical properties as the Asian reishi is another question yet again. It is certainly used as reishi by some herbalists[ii], but it’s not unusual for even very similar species to have very different properties.

G. lucidum was the old scientific name for reishi. When the group was split, the G. lucidum name was retained by the European species. The Asian species, reishi proper, is now G. lingzhi, while the two North American species are G. curtisii, and G. sessile.

When the term “Reishi” is used in literature it is most likely referring to the popular Ganoderma lucidum.

Cap: Medium to large, kidney-shaped, shelf-like. May be entirely whitish when the fruiting body is first growing, but then develops a hard, red or red-brown, lacquer-like crust on the top. There may or may not be zones of different colors (tan, orangish, yellowish, or grayish). The surface is hairless and may become wrinkled or, near the attachment point, lumpy. The interior flesh is tan or brownish and in cross-section has faint, but visible rings, like those of a tree.
Gills:  There are no gills. The pore surface is whitish or brownish when young, becoming brown to dark brown with age. The surface darkens when bruised.
Stem: Usually without a stem.
Smell: Nothing distinctive for ID purposes.
Taste: Nothing distinctive for ID purposes.
Spores: Ellipsoid, double-walled.
Spore color: Reddish brown. A dusting of spores may be visible on surfaces under the fruiting body.
Edibility: Not palatable.
Habitat: Eats dead or dying hardwoods, especially the roots but also the base of the tree. Fruits either singly or in groups from stumps, logs, roots (including the roots of dead trees whose stumps have been removed), and from the wounds of living trees. Common east of the Rockies in North America.

Ganoderma sessile is capable of attacking living trees of many species, usually through a wound, and usually kills the trees it attacks, though oaks can often survive infection much longer than other species[iii]. Once an individual begins to fruit, it will continue to fruit every year until its food supply is gone. The fruiting bodies themselves are annual, for while they may sometimes linger for over a year, the fungus does not produce spores through the same ones twice. The fruiting bodies are too tough to eat but are not woody and are even rather flexible compared to other ganodermas.

Of course all the mushrooms formerly known as reishi look very much alike, but fortunately they don’t all grow near each other.  G. lingzhi is not known to be from North America at all, while G. lucidum is found in Western North America, apparently having been introduced, but only in a few small areas[iv].

G. sessile and G. curtisii could be mixed up, as the most reliable differences between the two are hard to see; G. curtsii has small spores and its flesh, seen in cross section, has melanoid bands, whereas G. sessile has larger spores and concentric growth rings in its flesh. G. curtsii usually has a large stem (off to the side of the cap, like the handle of a fry-pan) while G. sessile usually is stemless, but “usually” is the operative word; either could have a stem, and either could be semless.

G. sessile does resemble all the other ganodermas to some extent, but the reddish lacquer-like upper surface and the flexible, not woody, texture separate it from most fairly well. The Red-Belted Conk (Fomitopsis pinicola) is not a ganoderma, but does superficially resemble one, and it, too, has a reddish upper surface—but it is woody in texture, and its pore surface does not bruise visibly.

The recent division of the reishi into four separate species throws research on the medicinal application of the reishi into doubt. Most seriously, some of the data attributed to one species might actually belong to another. The practical experience of practitioners and users of reishi products might also involve multiple species. Commercially available reishi products can, in fact, include multiple species, though the Asian reishi, G. lingzhi, is most common[v]. The result is it is difficult to say exactly what any one ganoderma can do. It is likely that the four species are biochemically similar, but not identical.

The reishi[vi] has a long history of medicinal use in Asia and has shown promise in a variety of preliminary studies for uses including cancer treatment, immunomodulation, and diabetes treatment. Those studies likely involved G. lingzhi, as it is commonly cultivated, but some could have included G. sessile. It is difficult to be sure after the fact. There is virtually no published research on the medicinal properties of G. sessile specifically. Its properties may be the same as G. lingzhi, but then again they might not be.

There are no established dosage guidelines for G. sesssile. It’s best to defer to the judgment of experienced practitioners—however, see the note on safety.

The thinking is that if the original reishi is medicinal, it’s close relatives must be, too—but even if that assumption of biochemical equivalence is correct, there is evidence that reishi itself might be dangerous[vii].

Reishi certainly has known side effects. These include dryness and itchiness in the mouth, throat, and nasal passages, nosebleeds, bloody stools, and upset stomach. Reishi wine can sometimes cause rashes. Some people are allergic to the spores. What isn’t known is how common these side effects are among users.

Worse, there is some suggestion that extended use of some reishi products could cause liver damage.

Yes, there are medications that cause serious side effects, yet remain useful; reishi may be among them.   In that case, it may be best to use them only under the guidance of a qualified professional. The important thing to remember is that the ganoderma group is not entirely benign. And just as it is possible for the medicinal potential of the different species to vary, the potential for harm could vary, too. Caution is in order.