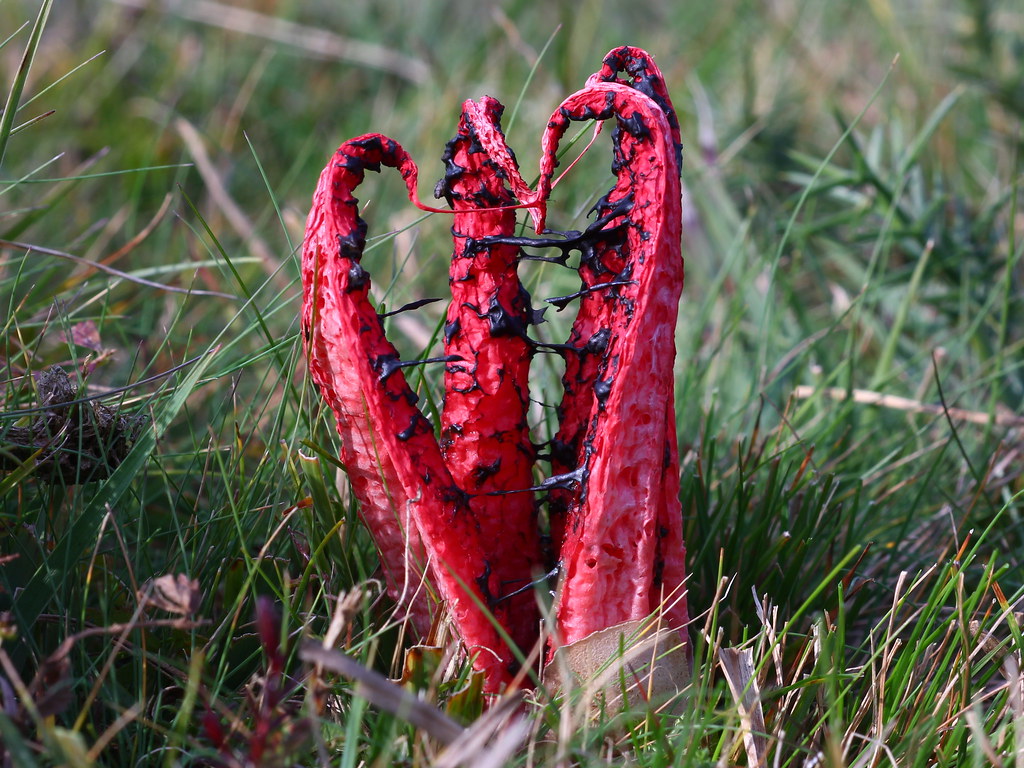 Clathrus archeri is described as looking like an alien creature that would not be out of place in a horror movie. The striking Clathrus archeri gives the appearance of long red fingers emerging from a partially buried white ball. This has led to multiple different names used to describe this fungus, including Devils finger fungus, Octopus stinkhorn and Helicopter stinkhorn.

Clathrus archeri reached Europe from New Zealand or Australia around the time of the first world war. It is thought to have traveled via war supplies or wool, having first been observed in Europe around 1914. In 1982 it was also found in California where it may have been transported with bamboo or other exotic plants.

Devil’s fingers fungus was first described in 1860 as Lysurus archeri by Rev. Berkeley, it was later moved to the genus Anthurus due to featuring free arms rather than in a cage-like form, and in 1980 it was moved to the genus Clathrus by Dring.

Clathrus archeri is saprobic meaning it feeds on decaying organic materials. The fruiting body of most fungi sprout from the ground or other growth materials such as wood; however, the fruiting body of Clathrus archeri emerges from an egg-like sac usually found amongst leaf litter, wood chippings and old stumps. The egg-shaped structure is the size of a golf ball that lies on the ground and is attached underground by a large network of threads (mycelium). The sac has a jelly-like texture, and early in the lifecycle a tinge of pink can be seen from what will be emerging fingers/arms or tentacles. When the conditions are favorable, the fingers will reveal themselves. The fingers are initially joined at the tip; however, they will gradually separate forming a star-like structure composed of 4-6 fingers/arms or sometimes 7 to 8+. The surface of the fingers smell terrible due to an olive, brown to black colored slime, within which spores are stored, The meat rotting smell of the slime attracts flies and other insects and slugs. When these creatures eat the slime containing the spores, it sticks to their feet, legs and wings, ensuring that the spores are spread far and wide when the creature moves on; this is a novel method of dispersing spores for the fungi.

Immature fruiting body: A white to beige ball is the initial stage, it may also appear pinkish or purplish; 2 to 3 cm in diameter and 4 to 6cm high.
Fruiting body: Bright red, hollow and arched soft arms/fingers emerge from the ball; 4 to 6 fingers typically, but 8 or more have been observed; arms/fingers can reach 10cm in height, each up to 1 cm wide at the base, tapering to a blunt end. Initially, arms/fingers arise from two vertical fused projections, gradually opening like a flower spreading out into a starfish shape. Arms/fingers are coated with a malodorous goo, olive or brown-black in color. Fruiting body can grow up to 20cm in diameter when mature.
Stem: Not present.
Smell: Strong and described as rotting meat; putrid.
Taste: Non-descriptive taste at egg stage.
Spores: Ellipsoidal to cylindric; smooth.
Spore color: Olive brown.
Edibility: It is suggested this mushroom is edible at un-opened egg stage; some countries consider it a delicacy.
Habitat: Often found in clusters or alone. Grows around old wood and leaf litter; lawns and cultivated soils.
Season: Can fruit all year round.

Clathrus ruber is also known as the Red cage or Lattice fungus is a mushroom that is likely to be confused with Clathrus archeri. Clathrus ruber has been reported as potentially causing eczema, convulsions, sickness and cancer therefore, correct identification is important. Pseudocolus fusiformis is also very similar to Clathrus archeri however, it usually has fewer fingers/arms; they are often paler in color and they may not separate.

There is no scientific evidence in support of any benefits associated with eating Clathrus archeri.

The immature stage of the egg-like fruiting body is eaten by some. When trying anything for the first time it is always important to err on the side of caution to avoid potential allergic reactions. The Clathrus ruber is very similar and may cause sickness, be sure to correctly identify the fungus before handling or ingesting.

Like other phalloid fungi, the arms/fingers of Clathrus archeri are coated in a sticky and foul-smelling gelatin-like substance when mature. Although quite inedible at this mature stage, due to the unpleasant smell, it is not considered toxic.