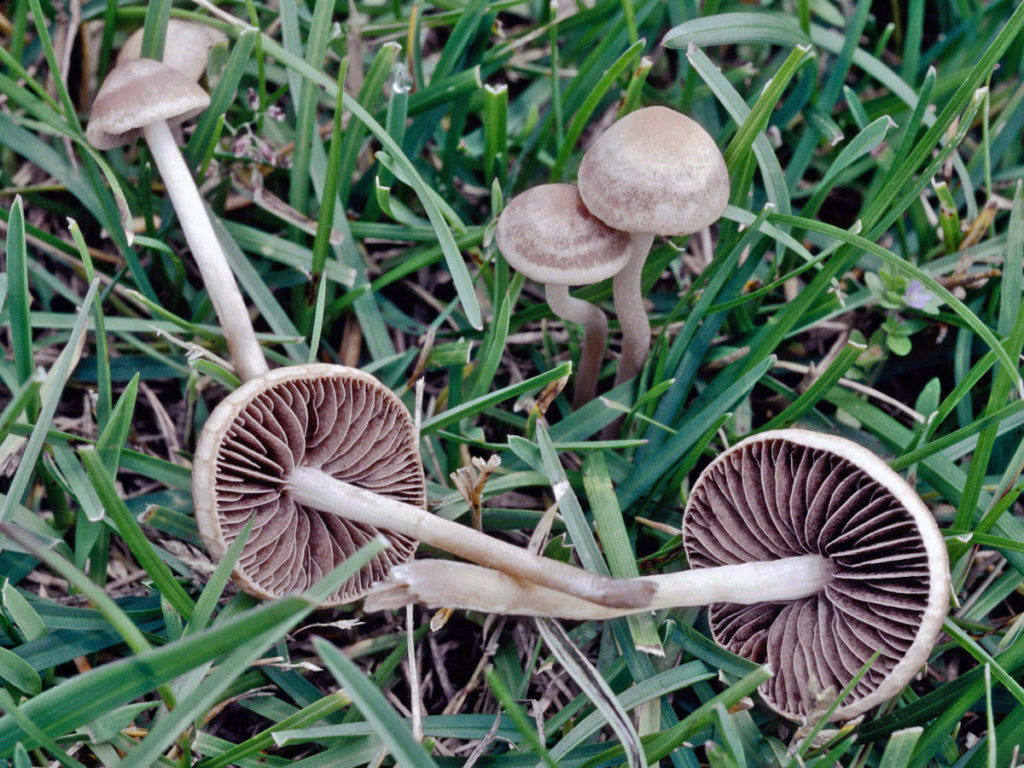 As it’s common name “Lawn Mower’s Mushroom” suggests, Panaeolus foenisecii is widely found on lawns. It is a little brown mushroom although the color of the cap can vary widely, this is because it is hygrophanous, meaning the color of the mushroom will change according to its moisture content. The mushroom is very common and found across Europe and North America. Although it is a small mushroom Panaeolus foenisecii can be found in large numbers and may prove difficult to control. Most people will have come across this fungus at some point as it is partial to growing on lawns that are frequently mowed; it is not often found on lawns that are well fertilized by artificial means. There are multiple different names for Panaeolus foenisecii including Haymaker or Haymower’s Mushroom, Brown Mottlegill and Psathyrella foenisecii. The word Panaeolus in its scientific name, means variegated, this is true of the color of the gills and foenisecii refers to haymaking.

Cap: 1.5 to 3cm in diameter; various shades of brown – hygrophanous. Conical or bell-shaped; becomes convex and flatter as it ages, with a knob.
Gills: Attached; brown but lighter at the edge; gills become mottled with age; narrowly attached to stem.
Stem: 4 to 6 cm tall; 2 to 3 mm in diameter; hollow and fragile; white to tan/light brown. Tapers towards the base. Lacks a ring or a partial veil.
Smell: Not distinctive.
Taste: Not distinctive or woody
Spores: Elliptical with small warts.
Spore color: Dark brown to purple brown; almost black.
Edibility: Inedible, but some report as edible, although not desirable; some may have psychedelic properties. Should not be eaten by children.
Habitat: Most commonly distributed in the grass of lawns; meadows and many other grassy areas. Can grow alone or in large numbers and difficult to eradicate. Saprobic – survive on decaying material.
Season: Late Spring, Summer, Fall and in warmer climates during Winter months.

There is no scientific evidence to support the benefits of Panaeolus foenisecii in dietary supplementation. There are conflicting reports into whether Panaeolus foenisecii is considered a psychedelic variety of mushroom. The general consensus is that it will not produce hallucinations and even 40g of fresh mushroom consumption failed to elicit any psychoactive response [1]; however, it has been argued that this may be more dependent on where it is found, the volume eaten and whether the mushroom contains the psychedelic substance, psilocybin.

It is noteworthy that the presence of serotonin has been found in extracts of Panaeolus foenisecii and its chemical precursor to serotonin and amino acid 5-HTP (5-hydroxytryptophan) [1]. Serotonin is a neurotransmitter important for cell signaling in the brain, in particular in mood enhancement and feeling happy, but serotonin does not cross the blood-brain barrier, and therefore dietary supplementation is ineffective. 5-HTP is taken as a dietary supplement to help assist with mood disorders, anxiety and sleep disorders, associated with reduced levels of serotonin. There is no scientific evidence in support of the use of Panaeolus foenisecii in mood disorders etc. which may be due to the lack of research itself or potentially because the levels of the 5-HTP are insufficient to make enough serotonin.

Some sickness following ingestion is reported.

Panaeolus foenisecii is considered edible by some and inedible by others. It should not be eaten by children, especially toddlers as it has been shown to cause sickness and there are reports of potential hallucinations in children; although, that has been debunked in other studies [1] [2].

The scientific evidence for side-effects and toxicity are varied, but a conclusion following assessment of the literature and reported cases have indicated that Panaeolus foenisecii is not psychoactive [2].  Another study looking at a small amount of Panaeolus foenisecii being eaten by children around the age of 3 reported that there were no significant clinical symptoms [3.]. Undeniably, there are some reports of these mushrooms, in the US, containing low levels of psilocybin (the hallucinogen) for this reason consumption should be avoided. Do not eat Panaeolus foenisecii if breastfeeding or pregnant. Seek expert advice from a mycologist and medical practitioner before eating for recreational purposes.