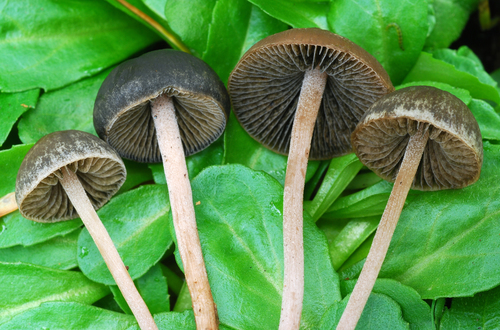 Not surprisingly, a species that sometimes contains no psilocybin at all is not very popular among psychonauts, but for many people, active mushrooms become something of a hobby, not just a way to get altered. And so there are people who hunt for, consume, and even attempt to cultivate[ii] P. olivaceus, simply as a way to get to know one more species in a fascinating group.

Cap: Bell-shaped, widening with age but never flat, dark gray to reddish-brown when fresh, drying to grayish or yellowish. Small to very small.
Gills: Attached to the stem, though sometimes barely so. Greenish when young, becoming mottled, then purplish gray-black with pale edges.
Stem: Not very long. Brittle, hollow, no ring, grayish to orangish, sometimes with a purple base.
Spores: Often elliptic.
Spore color: Purple-black.
Edibility: Sometimes psychoactive
Habitat: Lives in lawns, parks, and otherwise manicured grassy situations.
Range: This mushroom has been found in Washington, Oregon, California, Georgia, Quebec, and the UK[iii], a list of places so disparate as to suggest that either some of those collections are misidentified, or the species actually lives almost everywhere.

The bell-shaped cap is distinctive, as are the color and microscopic details of the spores. The mottled appearance of the gills is typical of the entire genus, a group referred to collectively as the mottlegills. The mottling is caused by the patchy maturation and darkening of the spores.

P. cinctulus, The Banded Mottlegill and Panaeolus foenisecii are the closest look-alikes. Differentiating the two may require microscopic examination of the spores. But, as a “little brown mushroom,” or LBM, this species has a huge number of potential look-alikes, all of them smallish and brownish or grayish, and many sharing the same grassy habitat. Telling them all apart is not difficult, but does require careful attention to detail.

Some LBMs are highly toxic, so mistakes could be very serious.

P. olivaceous is only psychoactive sometimes, so eating a specimen with no psilocybin in it has no known effects. It is not known to be toxic, and is therefore probably healthy to eat, just like other edible mushrooms—though this one is too small to be of much use in the kitchen. The taste has not been commented on (though many “magic” mushrooms taste like flour, so it may, too).

When psilocybin is present, it causes the same effects psilocybin usually does—changes in mood and thought-pattern, as well as nausea and sometimes more serious symptoms. Hallucinations are common with psilocybin at higher doses, but getting there with this species might require eating a lot of mushrooms.

Psilocybin is used recreationally, but it’s also used as a means to gain spiritual and personal insight, as well as to treat a range of ailments, from anxiety to migraine headaches. Because the use or possession of psilocybin is against US Federal law, there has been almost no clinical research on whether these treatments really work (most psilocybin research has looked at who uses it for what and whether they self-report success). However, some users say the substance has helped them even when more standard treatment couldn’t.

As noted, P. olivaceus is not only low-potency, it sometimes has no potency at all. As a way to get altered, it’s hit-or-miss.

There is no available information on cultivation. Probably any method that works on other grass-loving Panaeolus species will work.

There is no way to calculate recommended dosage for something with a psilocybin content that is sometimes zero.

Popular methods of consumption for Panaeolus olivaceus include Lemon Tek and Shroom Tea.

The most serious problem with P. olivaceus is likely misidentification. Mistaking one of the very potent members of the same genus for this one could result in someone accidentally getting ten or twenty times as much psilocybin as expected-a-and psilocybin, while relatively safe as mind-altering drugs go, can be dangerous, especially at high doses. Possible rare side effects include vomiting, debilitating anxiety episodes, convulsions, and even (very rarely) death. Ingestion by children is especially dangerous.

Accidental ingestion by anyone can be a problem. Because many people like what psilocybin does, it’s easy to forget that it’s technically a poison. Taking it by accident, without expecting to trip or wanting to, could be very unpleasant and possibly dangerous.

Another kind of misidentification must be kept in mind. Although The Deadly Galerina (Galerina marginata) does not share the same habitat, it looks similar enough to confuse the unwary, and it is aptly named. It’s not the only potentially deadly LBM, either. Careful identification of every mushroom is a must.

Finally, remember that knowingly using or possessing psilocybin in any form is illegal in most jurisdictions, and penalties can be extremely harsh. Going to prison sounds like a bad trip.