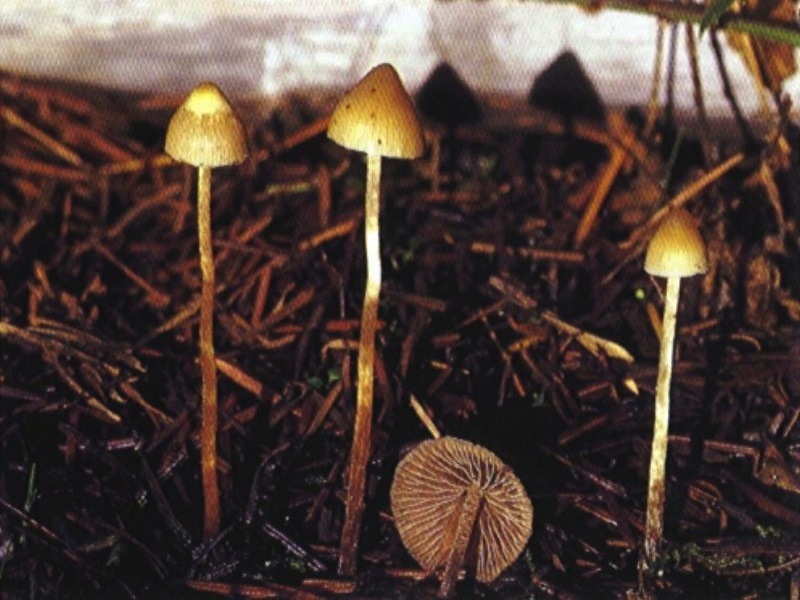 Psilocybe silvatica[i] is a weakly psychoactive, psilocybin-containing mushroom. Unfortunately, it’s very difficult to find information about it, since its use is not popular. In search-engine results, it is typically swamped by information on other mushrooms with similar names. Perhaps we will redress the problem, at least to some degree, with this article.

Cap: Small to very small, cone-shaped, often with a pointed center. Unlike with many Psilocybes, the slimy skin on the top of the cap is not easy to separate from the rest. Dark brown when damp, but fading to yellowish or grayish as it dries. Typically does not bruise blue.
Gills: Attached to the stem, but barely so. By maturity, can be any of several shades of brown with whitish edges.
Stem: Long, thin, tubular. Whitish or brownish with a whitish covering. The thin, subtle ring does not last long. The base of the stem may bruise blue, but the reaction is very subtle.
Spore color: Dark purple-brown.
Edibility: Psychoactive.
Habitat: Eats and lives in wood chips and other woody debris, or the duff layer beneath conifers. Sometimes fruits in clear-cuts. Fruits in small groups.
Range: This species is known from Washington State, in the USA. If it grows elsewhere, it has not been found yet.

The most distinctive macroscopic features are probably the near lack of blue bruising and the difficult-to-separate top layer of the cap. Initial identification is therefore a matter of ruling out other species, followed by microscopic examination.

P.silvatica does have some look-alikes that are so close they require microscopic examination to tell apart. Habitat choice can be a good hint, but this species does share its habitat with at least one of its look-alikes.

More broadly, all the psilocybin-containing mushrooms look somewhat alike, and all of them fall into the “little brown mushroom” category (often abbreviated to LBM), that also contains both edible (non-psychoactive) and deadly-poisonous species.

Since P. silvatica contains psilocybin, the effects of eating it are more or less those of consuming psilocybin, a psychoactive substance known for producing euphoria, altered thought-patterns (often leading to important personal insights), and, at higher doses, hallucinations.

Other effects include nausea and, more rarely, vomiting or extreme anxiety. In rare cases, even more serious reactions are possible, especially among children (who may consume the mushrooms without knowing what they are). Bad reactions become more likely at higher doses.

Psilocybin is often used simply for recreation, but it can also be used as a tool for seeking spiritual insight, and, at least potentially, as a treatment for a variety of conditions from anxiety to migraine headaches. That is, many people do use it to treat such conditions, and many report success doing so, even after better-established treatments had failed, but personal experience and anecdote is not reliable proof that a treatment works. The placebo effect or various forms of bias could be in play. Unfortunately, because psilocybin use is against US Federal law, clinical research is difficult at best and is still in its infancy.

So we don’t really know for sure.

P.silvatica has low potency, relative to many of the more popular Psilocybes. That may be part of the reason it is not very popular.

There is no readily-available information on the cultivation of this species. However, many other Psilocybes have been successfully cultivated and are grown widely (albeit illegally). It is likely that techniques that work for other wood-loving Psilocybes from the Pacific Northwest (that is, species adapted to a similar climate) would work for P. silvatica.

It’s possible to calculate a rough dose for psychoactive mushrooms if one knows the potency of the species, whether the mushrooms are fresh or dried, and what sort of experience the user wants (microdose, beginner’s dose, experienced-user dose, and “heroic,” for example). However, since both the potency of individual mushrooms and the sensitivity of users to psilocybin vary, such calculations can only ever be approximate. It’s best to err on the side of doses that are too small, not too large, since dangerous reactions are more likely at higher doses, especially for inexperienced users.

P. silvatica specifically can be used to deliver doses of any size (a heroic dose would just require eating a great many mushrooms), but it is probably best-suited to microdosing. Measuring out fine gradations of “small” is easier, after all, if a few grains of dried mushroom powder won’t dramatically alter the dose, as could happen with extremely potent species.

Popular methods of consumption for Psilocybe silvatica include Lemon Tek and Shroom Tea.

The most obvious danger in taking any psilocybin-containing mushroom is that doing so is illegal. The law varies from jurisdiction to jurisdiction, but there are few countries where it is fully legal. Penalties can be very harsh. It’s important to know what the law in your area is before deciding to take psilocybin.

Beyond that, psilocybin, though a relatively safe way to alter the mind, is not a risk-free chemical. It can cause serious mental and physical problems. Fatalities have occurred. The risk can be minimized by not taking too much, never mixing psilocybin with alcohol or other drugs, never tripping alone (that is, have a sober companion, not just a fellow tripper), and taking the time to mentally prepare for the experience. The setting also must be enjoyable and safe. It’s important, too, to take the time to think about and understand the experience afterwards.

Finally, there is the danger of misidentification. With a low-potency species, like P. silvatica, a mix-up with another Psilocybe could be dangerous. If a high-potency species is mistaken for P. silvatica, the user could end up taking way too much psilocybin and get badly hurt.

But worse would be mistaking the aptly-named Deadly Galerina (Galerina marginata), or another of the seriously poisonous LBMs, for a friendly Psilocybe. There are people who have died that way.

It’s not that LBMs are difficult to tell apart (actually, some are, but that’s not the point). The problem is that beginners and experienced foragers alike can convince themselves it’s OK to skip steps (because the mushroom “looks right,” or to not key out a mushroom because it was growing near similar-looking safe ones. No. Every single mushroom must be carefully identified.