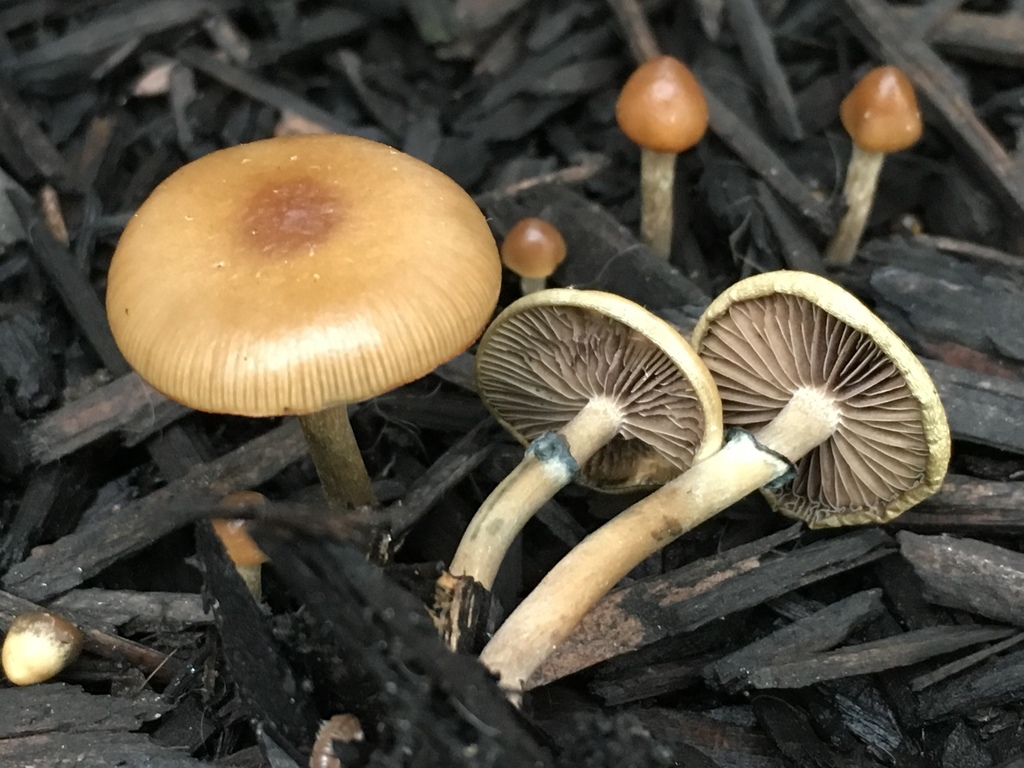 Psilocybe stuntzii also known as Blue ringers[i], or Stuntz’s Blue Legs, is a weakly psychoactive mushroom common on lawns and pastures in the Pacific Northwest. It is not especially popular among recreational users, although it does have the advantage of fruiting into the winter when growing wild.

Cap: Small to medium-sized, conical when young, becoming nearly flat with a wavy edge with age. Variable in color, but often yellowish or greenish brown.
Gills: Attached. Off-white when young, turning brown with age.
Stem: Medium in length, sometimes thicker at the base, yellowish in color. A bluish ring, the remnant of the partial veil, is distinctive.
Spores: Elliptical.
Spore color: Purple-brown.
Edibility: Psychoactive.
Habitat: Often found in lawns, pastures, and mulch-beds. Usually fruits in groups.
Range: Found in Washington, Oregon, and California as far south as Los Angeles.

The blue ring[ii] around the stem is a subtle but very distinctive feature. Like many other Psilocybes, this mushroom will bruise blue when handled, but the bruising is not dramatic.

Most psilocybin-containing mushrooms look alike, differing only in fine gradations of variable characteristics, though with practice they can be differentiated. More serious is the fact that these come under the heading of LBMs (“little brown mushrooms”) a large and mostly unrelated group of very similar-looking species that includes some dangerously toxic members. A spore print will at least distinguish the relatively safe Psilocybe group from the others.

The effects of taking Blue Ringers are essentially the effects of taking psilocybin, a psychoactive substance found in many mushroom species and used for recreational, spiritual, and medicinal purposes. Medical use has not been well-researched yet (that psilocybin is against Federal law in the United States to even possess is a serious barrier to clinical research), and so its effectiveness has not been confirmed, but many people claim it has helped them with various conditions from anxiety to migraine headaches, often when more mainstream treatments had failed.

Known effects include hallucinations, changes in mood and thought-pattern, nausea, and trouble with coordination and balance. Often, the changes in mood take the form of euphoria and a feeling of connection, but not always. The altered thought patterns can lead to important personal insights, though wisdom is never as simple as eating a mushroom. The experience can vary dramatically depending on the dose and the mindset and surroundings of the user.

Dangerous effects and even fatalities are rare but possible, especially in children.

Blue Ringers are much less potent that most other popular psychoactive mushrooms, requiring doses almost ten times the size of that used for P. cubensis to get the same effect[iii].

It is possible to get grow kits for Blue Ringers, and the species will fruit if grown indoors, but it’s evidently rarely done as there is not much information available on it. There are probably other magic mushrooms that are worth your time to grow.

In general, doses must be much larger than needed for some of the more popular species to get the same effect, however dosage calculations must always be regarded as rough estimates. Psilocybin content can vary, as can human sensitivity to psilocybin.

There is not just one dosage for psychoactive mushrooms in any case. Most people recognize three to five dosage levels, depending on what kind of experience the user wants—“microdose, beginner, experienced, and heroic” is a common way to express the range of options. Given the low potency of Blue Ringers, it may be a better option for microdosing.

Popular methods of consumption for Psilocybe stuntzii include Lemon Tek and Shroom Tea.

There are several different types of risk associated with using Blue Ringers. One risk is certainly the law—while laws and policies regarding psilocybin vary dramatically from one jurisdiction to the next, in most places it is illegal to use or even knowingly possess. Penalties can be severe. It’s important to find out what the law in your area actually is before using psychoactive mushrooms.

Psilocybin itself is a relatively safe way to alter the mind, but the key word here is “relatively.” Bad reactions, such as extreme anxiety, vomiting, and convulsions are rare but possible, and fatalities have occurred. Bad reactions are more likely at higher doses, and the risks can be minimized by taking a few, simple steps.

The accidental ingestion of psilocybin-containing mushrooms is another matter. Even in the best-case scenario, unexpected and unwanted hallucinations could be very bad, and dangerous reactions are especially common in children[iv]. Accidental ingestion should be treated as a case of mushroom poisoning.

Misidentification is another source of risk.

First, one of the other psychoactive mushrooms could be mistaken for Blue Ringers, a problem since many of the others are much more potent. The user could end up taking ten times the dose they really want, a recipe for disaster.

Or, one of the dangerously-toxic look-alikes, such as the Deadly Galerina (Galerina marginata), could be mistaken for Blue Ringers, an even bigger disaster. There are people who have died by mixing up Deadly Galerina with one or another “magic mushroom.” It is possible to survive such a mistake with aggressive medical intervention and luck, but most victims don’t.

It’s not that Blue Ringer is especially difficult to properly ID (it isn’t), it’s that too many people skip steps and eat mushrooms that look right without actually going through all the necessary steps. Do not make that mistake. Identify every single mushroom before eating!