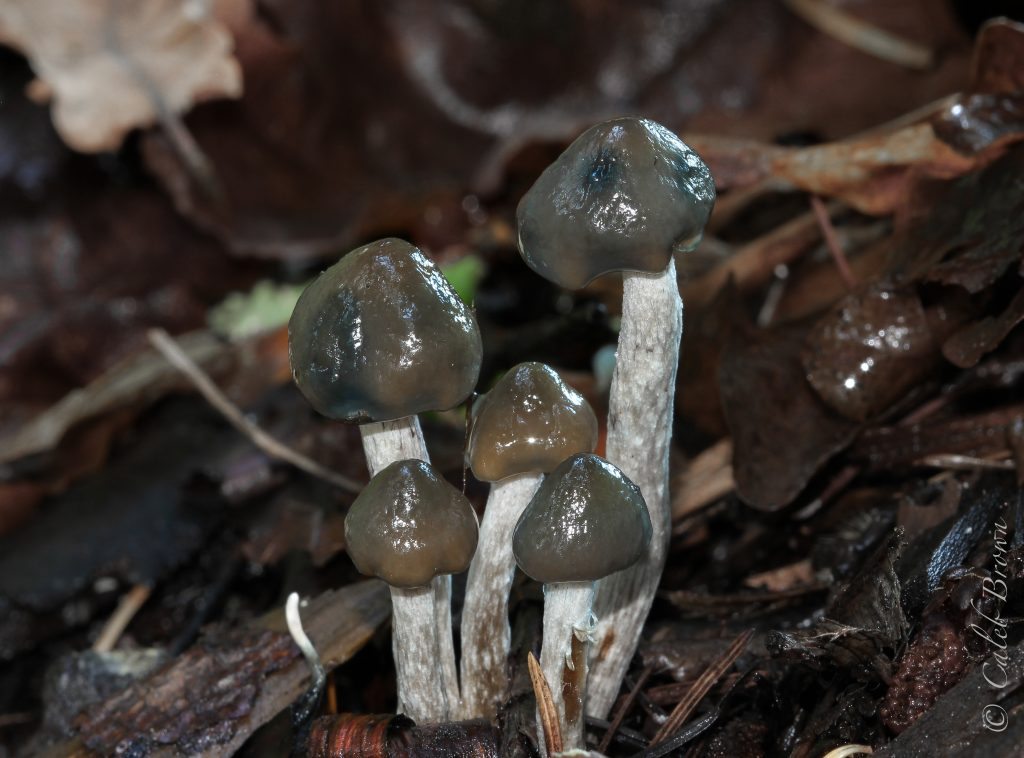 Psilocybe baeocystis[i] is a psychoactive mushroom native to the Pacific Northwest, though it has also been found growing wild in parts of New England. It may or may not be native to New England, though. It could have been introduced. The species is common in garden beds mulched with wood chips or peat moss or on old but well-kept lawns. It’s not especially well-known, possibly because it is difficult to cultivate and doesn’t dry well. It’s range appears to be limited as well.

It’s worth remembering that taking advantage of the mushroom’s psychoactive properties—or even just  knowingly possessing the mushroom—is extremely illegal in most jurisdictions. Please find out what the law is in your area and exercise discretion. Jail does not sound like a good trip.

Cap: Very small to medium. Cone-shaped, becoming flat in old age. The margin is wavy, sometimes suggesting a tablecloth hanging off the edge of the table. Brown or brownish, fading to white, sometimes greenish. Bruises blue.
Gills: Attached. Grayish or reddish brown with pale edges.
Stem: Long, thin, brownish to pale. Bruises blue. Remnants of the partial veil soon become inconspicuous.
Spores: Almost round.
Spore color: Purple-brown.
Edibility: Psychoactive, but not otherwise considered toxic.
Habitat: This mushroom lives and feeds on well-rotted wood and other decomposing matter. Although it presumably occurs in wild settings also, it is common in urban or suburban areas within its range, especially at the transition between mulch and grass. Fruits singly or in groups.
Range: Mostly lives in Oregon and Washington, but has also been found in Maine and Connecticut.

P. baeocystis is somewhat more distinctive-looking than most of the other Psilocybes, due to the wavy margin that often (not always) makes the mushroom look like it had a piece of cloth draped over it. The mushroom also has an extreme bluing reaction, sometimes bruising blue even in response to being rained on. The entire mushroom may turn blue.

Most other Psilocybes look something like P. baeocystis, to varying degrees. This mushroom is also one of the LBMs (“little brown mushrooms”), a large group of mostly unrelated mushrooms that all resemble each other. Some of these are dangerously toxic, so proper identification is a must.

The effects of taking P. baeocystis is essentially that of taking psilocybin, a psychoactive substance known to cause hallucinations, changes in mood and thought pattern, problems with muscular coordination and balance, and nausea and sometimes vomiting. Serious reactions, including intense anxiety or even convulsions, are rare but possible.

The reason many people like psilocybin is that the mood changes often involve euphoria and a sense of connection, and the changed thought patterns often result in important personal insight. The substance is also being investigated for medicinal potential. Research is still very preliminary because psilocybin use is illegal, but many people are already using it to attempt to treat a variety of conditions, from anxiety to insomnia to epilepsy. Many swear by psilocybin’s effectiveness.

P. baeocystis is considered extremely potent when fresh, but much weaker when dried[ii].

P. baeocystis[iii] is difficult to cultivate, and it is not clear it has ever been cultivated successfully indoors. Part of the problem is it does poorly on sterilized substrates. It can be grown in outdoor plots on well-rotted wood chips and other organic matter, but fruiting takes a long time. It’s worth noting that since mushroom cultivation in general usually results in a big flush of mushrooms all at once, growers often have to preserve much of their harvest for later, usually by drying—and that’s not a great option for a species that loses much of its potency as it dries out.

Collecting a couple of mushrooms from the wild may be the better bet.

P. baeocystis, when fresh, is unusually potent relative to most other Psilocybes, meaning that doses must be small. Many people take only one or two mushrooms at a time. However, proper dosage can vary a lot, depending on what type of experience the user wants, how sensitive the user is to psilocybin, and how potent the individual mushrooms are—potency can vary within a species, not just between species.

Popular methods of consumption for P. baeocystis include Lemon Tek and Shroom Tea.

P. baeocystis has a reputation for being a very dangerous mushroom, as the deaths of two children been blamed on it. Actually, the children ate mushrooms of a different species that was simply misidentified for a long time. That being said, any mushroom that contains psilocybin could, in theory, kill somebody if the dose is high enough—it’s just that such incidents are very, very rare. It’s not clear if this species has any true documented fatalities. It might not. Psilocybin is a relatively safe way to alter the mind.

Lesser but still serious reactions are rare, but possible, especially at higher doses. Extreme anxiety is probably the most common. The risk can be minimized by avoiding higher-than-intended doses (err on the side of too low, not too high), come to the experience mentally and physically prepared, keep the setting safe and relaxing, and never trip alone. It’s also important to take the time to properly integrate the experience after the fact, to learn from it and not take it for granted as simply a good time.

Another source of danger involves mistaken identity. Mistaking one psychoactive mushroom for another could seriously mess up dosage calculation. Mixing up psychoactive and dangerously toxic species is worse. The Deadly Galerina (Galerina marginata) and others can easily kill a human eater. And, perhaps most frightening, P. baeocystis, like many other psilocybes, can grow in mixed patches with other species, including its look-alikes.

It’s not that these mushrooms are impossible to tell apart. They aren’t. It’s that a forager who skips steps, who assumes that a mushroom that looks right must therefore be right, could easily get in serious trouble. Every single mushroom intended for a human mouth must be properly and thoroughly identified first—even when it comes from a clump of mushrooms that have already been properly keyed out. You don’t want the mushroom you neglected to look up to turn out to be the Deadly Galerina.

The final source of danger involving P. baeocystis comes from the police, since psilocybin in any form is illegal in most places. The laws vary from jurisdiction to jurisdiction, as does the official eagerness to discover and prosecute possession and use, but in many places the laws are strict and the punishments are harsh. It is important to find out what the law is in your area before even considering breaking it.

Not that it’s our place to suggest anyone break the law at all.