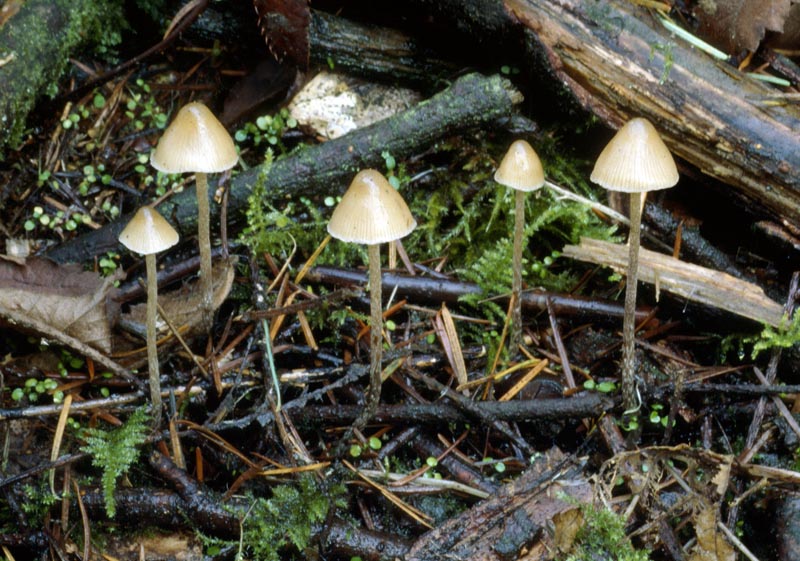 Psilocybe pelliculosa[i] is a species of weakly psychoactive mushroom native to the Pacific Northwest of North America. It’s not a popular species for recreational use, but some people do like it, and it can fruit prodigiously in the wild. It’s a late-stage decomposer of conifer wood, and a pretty little mushroom, though not distinctive-looking.

It’s worth noting that possessing or using psilocybin, even inside a mushroom such as P. pelliculosa, is against US Federal law and also against the law in almost all US states. A few localities have decriminalized it for personal use or begun the process of creating legal or semi-legal ways to use it in a therapeutic context under supervision. But in general, the law is a problem for would-be users, who are advised to find out what the law is in their area before even considering breaking it.

We’d really rather our readers not go to prison.

Cap: Small, broadly cone-shaped, brownish when moist but dries to various shades of yellow. The margin may be pale. May have greenish patches. Smooth. Inner flesh is roughly the same color as the surface.
Gills: Attached. Reddish-brown at first, darkening with maturity.
Stem: Thin, sometimes long, Whitish near the top, brownish near the bottom. Bruises blue-green. The ring is either absent or very subtle.
Smell: Slightly flour-like
Taste
Spores: Oval-shaped.
Spore color: Purplish-brown
Edibility: Psychoactive, but not otherwise considered toxic.
Habitat: Grows and feeds on decayed conifer wood or on soil that used to be conifer wood. Common along paths and long-abandoned logging roads. Fruits is loose or tight groups.
Range: The Pacific Northwest of North America, as far south as Northern California, north into British Colombia, and east as far as Idaho.

At first glance, this species is not distinctive, bearing a vague resemblance to a great many others. But an experienced eye notices the shape of the cap, the details of the color and surface texture of the stem, and the large to very large groups of mushrooms.

This species looks a great deal like many other Psilocybes, especially P. washingtonensis and P. silvatica. The latter is identical to P. pelliculosa except for the shape and size of the spores.

P. pelliculosa is an LBM, or “little brown mushroom,” and as such it bears at least a superficial similarity to a huge number of other small, brownish, non-descript mushrooms, including the aptly-named Deadly Galerina (Galerina marginata) and others that are similarly dangerous.

The effects of taking P. pelliculosa are essentially those of taking psilocybin by any other means, although since this is not a popular mushroom to use, specific trip reports for this species are hard to find.

In general, psilocybin[ii] causes hallucinations, alterations in thought-patterns (sometimes including important personal and spiritual insight), alterations in mood (often euphoria and a sense of connection, though serious anxiety is also possible), nausea, and sometimes vomiting or even convulsions. Dangerous reactions are rare but possible, especially at higher doses. Effects can begin twenty to thirty minutes after taking the psilocybin, and usually last six to eight hours, though fifteen-hour trips are possible.

Most people who take psilocybin probably do so essentially for recreation, although the substance can be used for spiritual purposes. Many people use it for therapeutic purposes, either on their own or under the guidance of a therapist (who may or may not be licensed, given the legal status of the substance itself). Psilocybin has been used to treat anxiety, depression, and a range of other maladies from migraine headaches to seizures, and some people swear by its effectiveness. However, due to the legal status of the substance, scientific research on the effectiveness of these treatments is still in its infancy.

Potency is weak, as compared to many other Psilocybes. An effective dose might require more than a dozen mushrooms.

Cultivating P. pelliculosa is difficult, largely because it is adapted to a cold, wet climate with cyclical weather patterns[iii]. Getting the fungus to fruit indoors requires mimicking the seasons (and particularly the winter) of its natural range pretty precisely. In contrast, P. cubensis and the other commonly-cultivated Psilocybes are mostly tropical or subtropical, and fruit readily in warm, humid conditions.

Few people attempt to grow P. pelliculosa , and those who do usually create outdoor beds in which the fungus grows and fruits essentially wild, except in some spot the grower considers at least semi-convenient. If you want to grow magic mushrooms, this is not the mushroom to do it with.

While it’s possible to calculate suggested dosages for psilocybin-containing mushrooms, actual potency can vary greatly between one mushroom and the next, even within the same species. Human sensitivity to psilocybin varies, too. It’s therefore always best to approach dosing cautiously, and to err on the side of taking too little, rather than take too much.

In general, many people think of psilocybin use as falling into three (or sometimes five) categories. These range from a microdose that doesn’t cause a high or hallucinations, only a subtle shift in mental state, all the way up to “heroic” doses that can cause serious psychological problems for the mentally unprepared. The microdoses are usually used only for therapeutic purposes.

Popular methods of consumption for Psilocybe pelliculosa include Lemon Tek and Shroom Tea.

There are three sources of danger associated with taking P. pelliculosa. One of these dangers is that of prison for being caught with a source of psilocybin. It’s important to take that danger seriously. Then there is the danger of mixing up this mushroom with one of its extremely toxic look-alikes, such as the Deadly Galerina—proper identification of every single mushroom is absolutely essential, since the Deadly Galerina can grow mixed in with groups of other mushrooms. Keying out ten mushrooms in a cluster and finding out all of them are friendly little Psilocybes does not guarantee the identity of the next ten in the same cluster. People have died from eating what they thought were Psilocybes but weren’t.

But psilocybin itself is not risk-free.

Psilocybin in basically a toxin that a lot of people like. Severe reactions are rare and use can be relatively safe provided the user takes some basic precautions, but even a small dose could be terrible for somebody not expecting to trip—such as if a few “magic” mushrooms got accidentally mixed in with some culinary species and eaten for dinner. A child eating a few out of curiosity could also be in very serious trouble.

And because P. pelliculosa is so mild, requiring very large doses for normal trips, a mix-up with a different (but very similar-looking) magic mushroom species could also be a serious problem. Overdoses of psilocybin are rarely fatal, but can be very bad.

The point is to be careful.