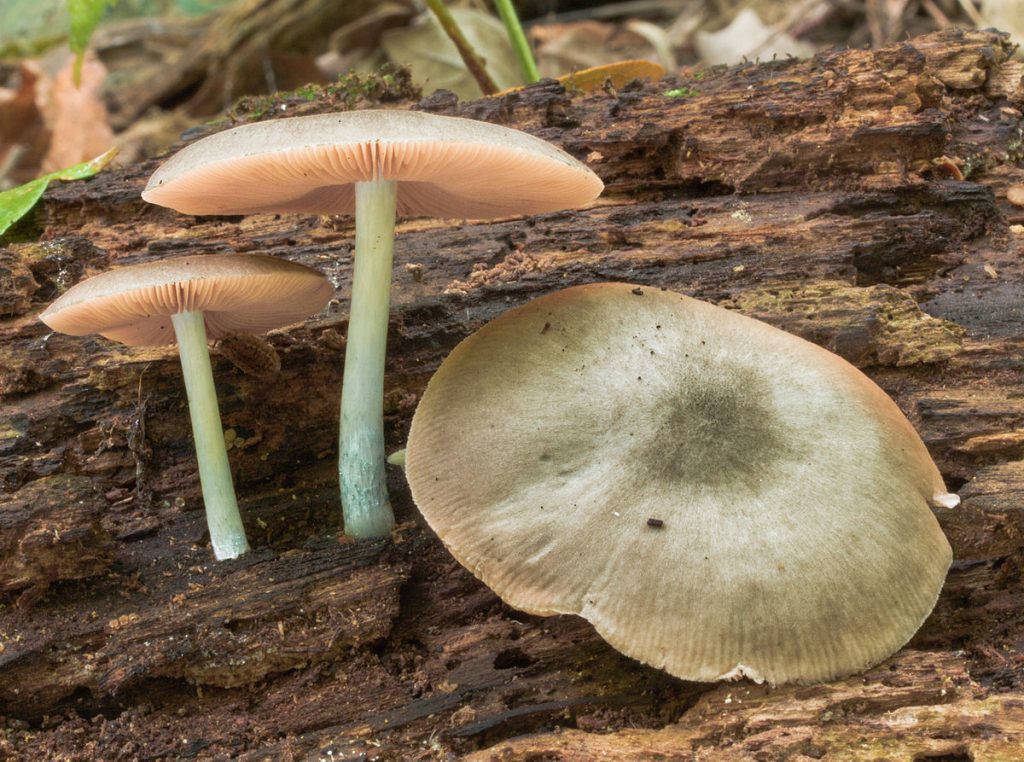 Pluteus americanus is a small parasol mushroom known to be hallucinogenic—though it’s seldom used and not much is known about it. Up until relatively recently, this mushroom was lumped into P. salicinis, a similar but exclusively European species. It’s still possible to find the old name in books and field guides. Another division may be necessary, since the distribution of P. americanus is odd: eastern North America and eastern Russia. Also, reportedly it is only psychoactive sometimes, suggesting significant biochemical, and therefore possibly genetic, variation.

Cap: Small to medium-sized, gray-brown. With a moist surface. The center is scaly, but the rest of the cap surface is not. Gets paler with age, or when picked and dried, ending up pale gray with a dark center. The interior flesh is white and does not change when cut open.
Gills: Not attached, or almost not attached, to the stem, white when young, then pink, then brown-pink. Bruise bluish.
Stem: Very thin, with a slightly enlarged base, with or without fine hairs, white when young, becoming brownish, bruises bluish (but slowly).
Smell: Some claim this mushroom has a distinctive psilocybin scent, different from that of related species that are not psychoactive.
Taste: Nothing distinctive for identification purposes.
Spores: Ellipsoid, smooth.
Spore color: Brownish pink.
Edibility: Hallucinogenic.
Habitat: Eats decaying, downed hardwood. Usually fruits in groups.

P. americanus is part of a large group of similar mushrooms, including the edible Deer Mushroom. It can be differentiated from most of the others because it stains blue when bruised, while the others do not. But there are a few other blue-stainers. Microscopic examination is necessary to differentiate this species from its closest look-alikes[i].

The closest look-alikes of P. americanus, besides the aforementioned European P. salicinis, are the several other members of the same genus that also bruise blue (the change may take a long time). These include P. cyanopus, P. phaeocyanopus, and P. saupei. All of them look identical except under a microscope. Some of the other members of the genus, including the American P. exilis and the European P. cervinus (both commonly called deer mushroom), look very similar, except they do not bruise blue.

P.americanus is also what’s known as a Little Brown Mushroom, or LBM, a large group of vaguely similar species that include hallucinogenics, edibles, and at least one that can kill. Experienced foragers can tell LBMs apart, but this is not a group for novices to play around with.

P. americanus is psychoactive, thanks to the substance, psilocybin, the same substance that is responsible for the psychoactivity of Psilocybe cubensis, the classic “shroom[ii].” In fact Pluteus americanus is similar in potency to Cubes. Psilocybin is used as a popular recreational drug (usually by eating mushrooms or mushroom products, though it is possible to isolate pure psilocybin as well), as well as for a number of medicinal applications, treating everything from headaches to depression. Such medicinal uses are based on a combination of anecdote and preliminary medical research—some people swear by its effectiveness, but not all initially-promising treatments pan out, and wishful thinking is a powerful force. That’s not to say psilocybin doesn’t work. It may. It’s just that we know less than many people think we do.

Psilocybin itself is generally safe when used cautiously (but see note under Safety), and the more popular psychoactive species, such as Psilocybe cubensis, are not known to cause any problems besides the side-effects of psilocybin. But P. americanus is not widely known among the shrooming community, and it is eaten, it’s use is rare enough that finding information about it is difficult. It is therefore difficult to say what, besides psilocybin, might be in the mushrooms, adding to or subtracting from their effectiveness.

It’s not clear whether P. americanus is more potent or less potent than Psilocybe cubensis. It’s not often eaten, though some people do use it. It’s always best to start off cautiously, with small doses—err on the side of micro-dosing, rather than over-dosing, especially since psilocybin content can vary even within a species, and human sensitivity to psilocybin also varies.

Popular methods of consumption for Pluteus americanus include Lemon Tek and Shroom Tea.

Psilocybin itself is relatively safe to use, but the key word here is “relatively.” Use is not without risk. Common side effects are mild and include nausea and excessive yawning, but more serious problems, such as severe anxiety, are not infrequent. More rarely, severe reactions may occur. Hallucination and altered patterns of thinking, arguably the whole point of taking psilocybin, could themselves be severely problematic for someone who wasn’t expecting to trip—if, for example, someone ate P. americanus by mistake, intending to eat one of the deer mushrooms. Responsible psilocybin users practice safety tips, such as never increasing the dose too quickly, and never tripping without a companion who is not tripping. But since P. americanus is not commonly used, it’s difficult to be sure it doesn’t contain something other than psilocybin as well—something that might make users sick. Caution is in order. Misidentification is also a concern. Although most of the closer look-alikes are either edible or psychoactive, most mistakes are likely to be relatively benign, it’s possible for novices or the hurried or the complacent, to mix up this species with some that are dangerous, such as the deadly galarina or even a small specimen of one of the toxic amanitas. The key is to do a careful and thorough identification ever time.