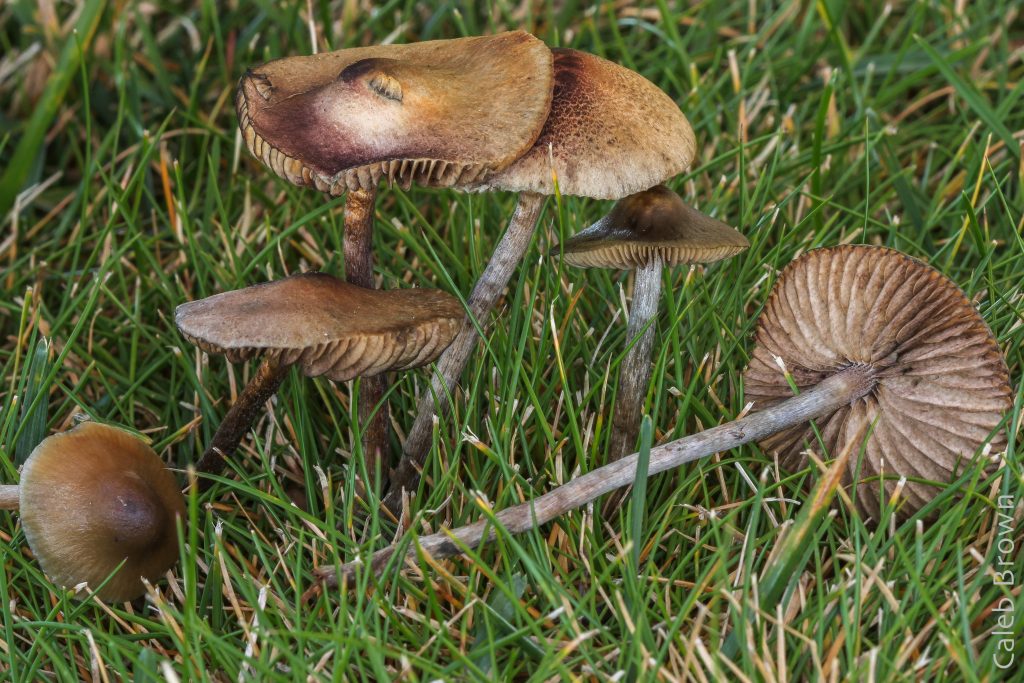 Psilocybe cyanofibrillosa[i] is another psychoactive mushroom related to the famous Psilocybe cubensis, although it is not as potent, nor is it wide-spread in the wild. Not much information is available about this species, though it does have its fans.

Please note that psilocybin, the “active ingredient” in this and most other “magic mushrooms,” is against US Federal law to use or even possess. In addition, most state and local jurisdictions, though not all, have their own laws and policies against this substance. People interested in using psilocybin mushrooms should find out what the law is in their area. Do not use any information in this article to get sent to prison.

Cap: Small to medium-sized, conical when young, becoming flat with age. Dark brown when wet, becoming tan, yellowish, or pale gray when dry.
Gills: Attached to the stem, but with a notch near the attachment point. Pale  gray when young, maturing to purple-brown with pale edges.
Stem: Medium length, thin, sometimes thicker near the base. Light brown with fibrils that bruise blue. The interior flesh is brown and also bruises bluish. There may be a ring zone, the remnants of a substantial but cobwebby partial veil.
Spore color: Purple-brown
Edibility: Psychoactive
Habitat: Lives and grows in grass or, less frequently, in mulch or in soil that contains woody debris.
Range: Washington State, British Columbia.

This species is relatively rare, but when found, it is often near mountain streams[ii].

All Psilocybes, and indeed most psilocybin-containing mushrooms, look similar, though details such as cap shape and color are often distinctive. These are also so-called LBMs (“little brown mushrooms), a large, mostly unrelated group of look-alikes that includes both culinary species and deadly-poisonous species. Safe collection depends on careful attention to detail for every single specimen intended for a human mouth.

P. cyanofibrilosa contains psilocybin, and therefore delivers the effects of psilocybin. These typically include euphoria, a sense of connection, altered thought patterns, nausea, and, at higher doses, hallucination. Difficulty with coordination or balance, vomiting, and other physical symptoms are not uncommon. Intense anxiety is not uncommon either, especially at higher doses—psilocybin is often said to enhance whatever mood the user would have anyway, for better or worse. More serious problems, including convulsions and even death are rare (as recreational drugs go, psilocybin is relatively safe) but possible. “Trips” usually begin about half an hour after ingestion and last six to eight hours, with a definite peak partway through. Much longer experiences are possible as well.

The effects of psilocybin are dose-dependent. A very small dose is mildly mood-altering and will likely introduce a new frame of mind but will not cause hallucinations. A very large dose will cause not only intense hallucinations but also the temporary loss of any sense of self—a terrifying experience for those not prepared for it, though some people seek it deliberately as a wellspring of insight. Since the concentration of psilocybin varies from one mushroom species to another (and between varieties—and sometimes even between individual fungi), a small dose of a weak mushroom, like P. cyanofibrillosa, might actually be physically larger than a big dose of something more potent. Many users define three to five dose levels, from microdose to “heroic,” so they can talk about the experience they want irrespective of the amount of mushroom they need to eat to get there.

Psilocybin is well-known as a recreational drug, but it is also used both as a means of achieving personal and spiritual insight and as a treatment for various medical problems.

It’s worth noting that simply having an experience that feels “spiritual” or that includes a lot of mind-blowing thoughts does not necessarily constitute anything other than entertainment. To become more than recreation, the mushroom experience has to be allowed to change the user’s life, something that is far more likely to happen if the user takes the time for adequate preparation beforehand and thorough integration afterwards.

It’s also worth noting that although psilocybin is being used to treat everything from anxiety to migraine headaches, and although some people assert that these treatments work when standard therapies don’t, we really don’t know much about psilocybin as medicine. Most of the research being done is not biochemical or clinical but rather sociological—surveys exploring who is using the substance for what, and whether users believe the therapies work. But a scientifically-conducted survey showing that many users believe a medicine works does not actually address whether or not it does work. The whole reason medical research exists is that human beings are consistently bad at figuring out on their own what works and what doesn’t. Unfortunately, the legal status of psilocybin makes clinical trials difficult to impossible.

Psilocybin may well work wonderfully well as medicine. The absence of proof is not the proof of absence, as they say. It would just be good to have the research to say for sure.

P. cyanofibrillosa is of low to moderate potency, making it convenient for beginners or anyone else who doesn’t want a large dose. Note that this species often loses 70% of its potency when dried, not because dryness per se chemically alters it, but because even the mild heat used by dehydrators is a problem[iii]. People interested in drying this species begin by air-drying, then remove all remaining moisture using a chemical desiccant.

Since P. cyanofibrillosa is low-potency, doses must be relatively large. However, since potency can vary from one mushroom to the next, and since human sensitivity to psilocybin also varies, dose recommendations should not be considered hard-and-fast. It’s best to err on the side of too-small, rather than too-large, since larger doses make dangerous or unpleasant effects more likely.

Popular methods of consumption for P. cyanofibrillosa include Lemon Tek and Shroom Tea.

Psilocybin is relatively safe, but it is not risk-free. In fact, there are three different kinds of risk.

Side Effects and Issues with Psilocybin

The most common unpleasant effects are nausea and difficulty with balance and coordination. Users tend to simply ignore these. The most common serious problem is extreme anxiety, though it can usually be avoided through basic safety procedures, such as maintaining a safe and calm setting and a calm and positive mind-set going into the experience, as well as not taking too much and never tripping alone.

Having a sober babysitter while tripping is also helpful for handing any real-world issues that may come up and confuse an intoxicated person.

Taking psilocybin with alcohol or other drugs is generally recognized as a bad idea, for various reasons.

Children are much more vulnerable to severe reactions than adults. A child who eats a psilocybin mushroom should be considered a mushroom-poisoning victim and given prompt medical attention. As with other forms of mushroom poisoning, bring a sample of the mushroom to the emergency room, since proper identification is critical for treatment.

An adult who accidentally eats a psilocybin mushroom can fairly be considered a poisoning victim, too—an unwanted trip could be highly unpleasant.

Mistaking a more potent psychoactive species for P. cyanofibrillosa could be a real problem because of the difference in dose size—the user could easily end up taking way too much.

Mistaking a poisonous species, such as the aptly-named Deadly Galerina (Galerina marginata), would be even worse. Although it is possible to survive such a mistake with prompt and intensive medical intervention, most people don’t (even with treatment!). Most frightening, Deadly Galerina can fruit next to or actually mixed in with groups of other mushroom species. Although it does not typically share a habitat with P. cyanofibrillosa, under rare circumstances, they could occur together.

It’s not that look-alike mushrooms are impossible to tell apart, it’s that the differences are often subtle or impossible to see without special procedures (taking a spore print, microscopic examination, etc.). The temptation can be strong to simply assume a mushroom is what you want it to be because it looks right. Yielding to that temptation can kill you. Every single mushroom picked for eating must be carefully and rigorously identified—even mushrooms growing together in a group might not all be the same kind.

Psilocybin is illegal in most jurisdictions. In the United States, while it has been decriminalized in some areas, both use and possession remain against Federal law. Penalties can be very severe. It is important that would-be users understand the law in their area before risking arrest.