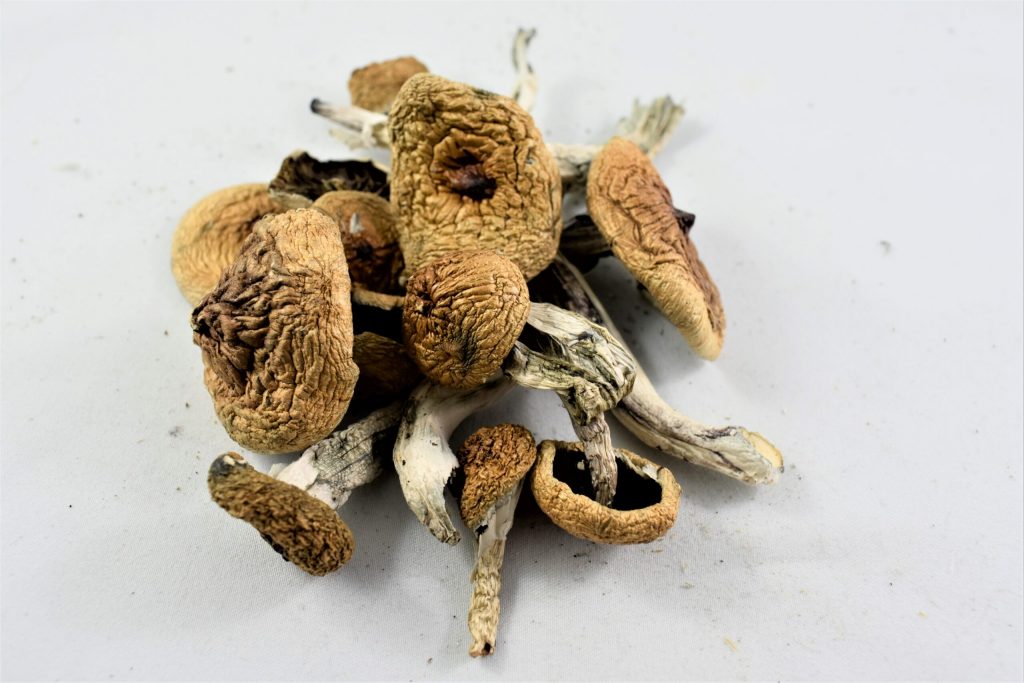 Albino A+[i], or AA+, as it is sometimes called, is a cultivated strain of the well-known psychoactive mushroom species, Psilocybe cubensis. It’s typically cream-colored to white, sometimes with a bluish tint—when damaged, it bruises blue very obviously. The spores are purple-black, and once they mature, they will cover the stem-ring and make it appear black. Because these mushrooms have reduced pigmentation, not none at all, they are technically “leucistic,”  not albinos. That’s good news for growers, since real albino mushrooms  have colorless spores that are almost invisible and thus very hard to work with.

There is also a more typically-pigmented strain called A+. The two are very similar and undoubtedly closely related. Curiously, sources differ as to which is the parent strain, but logic suggests that the non-albino version came first. Either way AA+ is the more popular of the two.

There is persistent speculation that albino A+ is actually part-Panaeolus, since its high is reportedly reminiscent of the effects of some of the more potent Panaeolus species. Actually, such hybridization between different genera is likely impossible, but there may be some coincidental biochemical similarity.

The important thing to remember is that albino A+ is very popular, thanks to its high potency and large flushes.

In general, eating Psilocybe cubensis results in changes in mood and thought-pattern and, at higher doses, hallucination. Nausea is also common, unfortunately. Dangerous side-effects are rare but possible, and children are especially likely to have bad reactions. The high usually begins about half an hour after ingestion and lasts six to eight hours, though longer trips are possible.

Whether any of the above varies depending on strain is a matter of debate. Some people say that “a cube is a cube,” while others insist e1ach strain is distinct. Members of the latter group say that albino A+ starts fast, is often funny, and causes hallucinations that make the world appear gelatinous.

Curiously, albino A+ is also known for having a particularly strong flavor that some users don’t like.

Potency does vary between strains. Albino A+ is one of the more potent Psilocybe cubensis strains.

Albino A+ can be grown by any method generally used for Psilocybe cubensis. It’s not a picky strain, and is considered easy to grow. Many growers report that it is a slow strain, though, with a very long colonization time and very slow fruiting—and some growers report that the strain is about typical in its timing.[ii] What is not typical is the reliability of the strain’s growth, the generosity of its flushes, and the plentiful production of spores by its mature specimens; impressive production makes albino A+ a favorite among magic mushroom growers despite its sometimes slow progress.

The effects of psilocybin, the chemical responsible for most of Psilocybe cubensis’ psychoactivity, generally depend on the dose—a very small dose will be mood-altering and mildly mind-altering, but it will not be hallucinogenic. A very large dose will cause temporary disintegration of the self, an experience some people seek and others find terrifying. Dangerous side effects are also more likely at higher doses. Users often speak of three to five dosage levels—for example: microdose (non-hallucinogenic); beginner; experienced; and heroic. It’s possible to estimate how much mushroom will get a person to each level, provided one knows whether the mushroom is fresh or dried, what strain it is, and other factors. But even within a strain, potency can vary, plus human sensitivity to psilocybin varies from person to person.

Dosage recommendations should be regarded only as rough suggestions.

Popular methods of consumption for Albino A+ include Lemon Tek and Shroom Tea.

Buying vs. Growing Albino A+

Someone wishing to use albino A+ has a choice of two main options—buying or growing. Each has advantages and disadvantages. Which one is best depends on the user’s situation and interests—and, to some extent, on applicable law.

Growing at home is by far the cheapest option on a per-gram basis, especially for people who collect their own spores and keep the straight growing for batch after batch. The only supplies that will need to be replaced are substrate materials and water, all of which is very low-cost. Plus, growing mushrooms is a fascinating hobby.

In some areas, there is a legal advantage to growing at home, too. In many (not all) jurisdictions, it’s not the fungus that is illegal but the chemical, psilocybin. From a legal perspective, a mushroom that contains psilocybin  is illegal only in the same way that a jar containing psilocybin would be—and spores don’t contain psilocybin. That means they are legal to buy and sell. The illegal activity happens only in the privacy of one’s own home.

But some jurisdictions do have specific laws against possession of these spores, plus having a large amount of illegal material in the home for an extended period can be a serious risk. Plus, not everyone even wants large amounts of the same strain, no matter how good that strain may be.

Buying mushrooms, though risky both from a legal perspective and in terms of quality (it’s not as if one can sue the seller if anything goes wrong), does allow a user to quickly obtain just a dose or two. That’s a good option for someone who doesn’t yet know if they’re going to like mushrooms, and it’s a good option for an enthusiast who wants to try every kind there is at least once.

Plus, there are areas that have decriminalized magic mushrooms for personal use, in which case possession of a dose or two will not be prosecuted, but possession of an entire crop might well be.

All this should not be taken as encouragement to break the law, however.