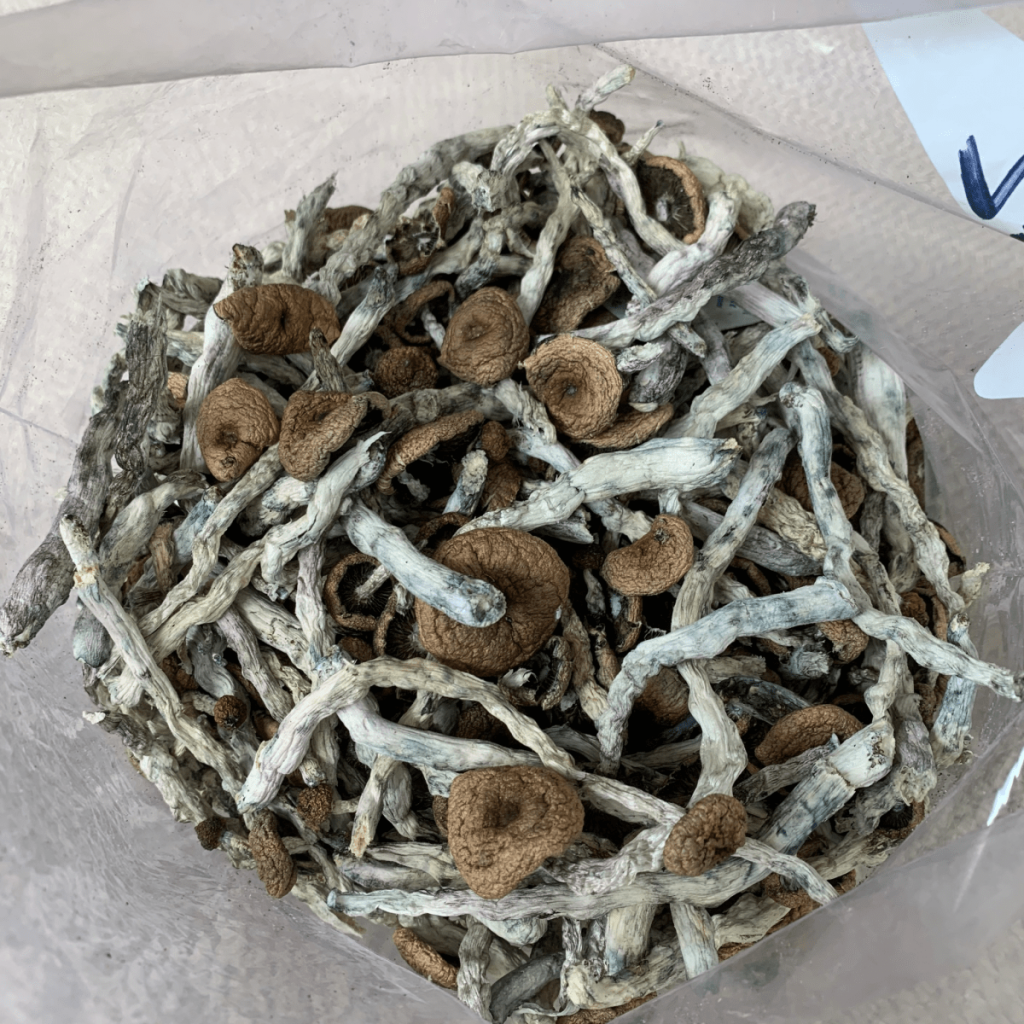 Costa Rican cubensis[i] is a naturally-occurring variant of Psilocybe cubensis that is now being cultivated. Although Costa Rica is a tropical country, this variant was found at high elevation and is more used to cooler temperatures, a fact growers should keep in mind[ii]. Although spores for the strain are widely available, it is difficult to find information on it from non-commercial sources.

Costa Rica cubensis mushrooms are brown and notable for the thick secondary veil, which tends to rip away from the stem at maturity, leaving veil remnants on the cap rather than on the stem.

Please note that since this mushroom contains psilocybin, its use or even possession are illegal in most jurisdictions. Please do not get sent to prison.

Psilocybin generally causes mood alteration (usually euphoria) and changes in thought-pattern (sometimes including important personal or spiritual insights) and, at higher doses, hallucinations. The effects begin about half an hour after ingestion and typically last six to eight hours, though longer highs are possible. Generally, the different strains of Psilocybe cubensis vary only in their potency, not in their effects, though some users insist that the quality of the high or the appearance of the hallucinations vary as well. There are few specific claims about the effects of the Costa Rican strain, however.

Most users describe the Costa Rican strain as low-potency, meaning it’s a good option for beginners or for micro-dosers. However, there are users who report more powerful effects, probably because sensitivity to psilocybin can vary a lot from person to person (that’s one reason why dose calculators should never be taken as more than a suggestion).

Note that it IS possible to get an intense experience from any psilocybin mushroom, it’s just necessary to  take more to get there.

The Costa Rican strain can be difficult to grow, partly because it likes relatively low temperatures. Colonization times are long, as are fruiting times, and any problem with growing conditions can slow down colonization times even more, providing opportunity for the growth of any contaminants that may be present. The combination of slow, difficult growth with low potency may be one reason this strain is not as popular as it otherwise might be—however, for those growers who manage to make the strain happy, it can become a real favorite[iii]. You can use all the normal methods to grow magic mushrooms for Costa Rican cubensis including PF Tek, Monotub Tek, and SGFC.

A rough dosage recommendation can be calculated using the species of mushroom, whether the mushroom is fresh or dried (living mushrooms are mostly water, so when dried they weigh dramatically less), the size of the user, and what sort of experience the user wants. Many people recognize three to five dosage categories, from microdose (which is only mildly mind-altering and not hallucinogenic), to beginner (mildly hallucinogenic), all the way up to “heroic” doses—those cause temporary disintegration of the self, a terrifying experience for those not ready for it. All categories are available from any psilocybin mushroom, it’s just that with a low-potency variety such as the Costa Rican strain, the doses have to be a little larger.

But dosage calculators should never be treated as completely reliable, since mushroom potency can vary even within a single strain and human sensitivity to psilocybin can vary dramatically.

It’s always best to err on the side of taking too little rather than too much, since unpleasant and even dangerous side-effects become more likely at higher doses, especially for people not used to them.

Popular methods of consumption for the Costa Rican strain include Lemon Tek and Shroom Tea.

Buying a dose or two of hallucinogenic mushrooms is quick and relatively inexpensive—but you only get a dose or two, and since buying psilocybin in any form is illegal in most jurisdictions, there is always the risk of being caught and sent to prison (a very bad trip).

The initial cash outlay for growing mushrooms at home is larger, and of course the whole process takes much longer, but you get substantially more bank for your buck. In fact, on a per-gram basis, growing is cheaper, especially for growers who harvest their own spores with which to start the next grow cycle. Plus, in most jurisdictions (not all!), buying and selling spores is legal because the spores do not contain psilocybin.

Growing at home is fairly easy with pre-made kits, and the Costa Rica strain is available in kits. Price and reliability will vary somewhat from brand to brand. Buying spores and putting together one’s own set-up takes more work and know-how, but many people find it a very rewarding hobby.

Growing mushrooms does have two disadvantages, though. One is that not everybody wants a big crop of mushrooms all of the same kind. A beginner who doesn’t know if they’ll ever want to do a second dose or an adventurous psychonaut who wants to try a different psychoactive variety every time might prefer buying in small quantities.

The other issue with growing is that although the chances of getting caught on any given day might be lower, thanks to the greater privacy involved, growers who do get caught might face stiffer penalties because of the much greater amount of material they’ll have on hand—and a grower has illegal material on hand for weeks or months at a time, rather than for only a few days as a buyer might.

Ultimately, the choice between growing and buying comes down to the needs and interests of the user and the details of the law in their jurisdiction.