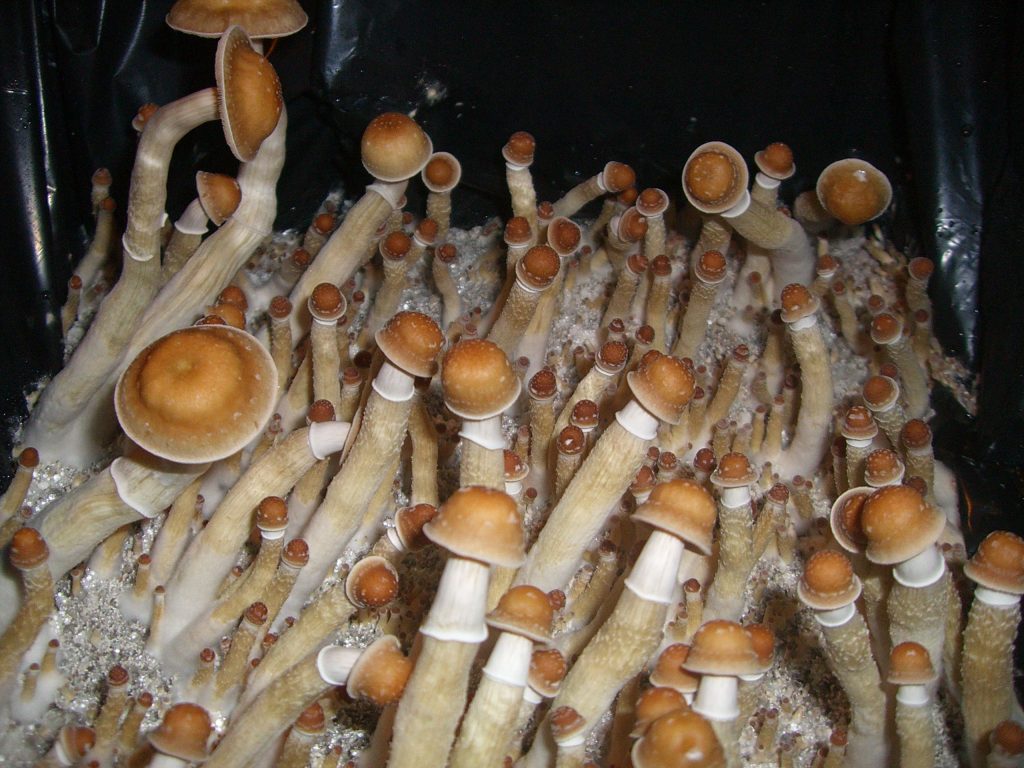 The PF in PF Redspore stands for “Psilocybe Fanaticus,” which looks kind of like a scientific name (note, however, it is not italicized, nor is the second word lower-cased) but is actually the nickname of one Robert McPherson. His nickname (or perhaps “nom de champignon?) is all over the mushroom world. The PF in PF tek? That’s him, because he invented it. He developed the PF Classic[i]  strain, too, and several variations on it. The Redspore[ii] is simply a red-spored version of the Classic.

The spores are not fire-engine red, more like a reddish brown. The gills are the same color, once the spores mature. But the color is notably different from the spores and gills of most other Psilocybes, which are purple-black. Actually, until genetics became a dominant factor in taxonomy, the Psilocybe genus was defined, in part, by its very dark spores—if a mushroom like the Redspore had been found growing wild during that period, it would have been categorized as an Aaricus, the same genus as the white button mushrooms they put on pizza! That spore color can change with a simple genetic mutation is why scientists stopped doing taxonomy that way, but a red-spored Psilocybe still sounds a bit oxymoronic to many mycophiles.

Like the Classic, the PF Redspore is popular with users for its potency, but is a little difficult for growers to work with. Still, it grows fast, when cared for well.

P.cubensis, of whatever strain, is one of the most popular psychoactive mushrooms in the world, the one usually meant by by phrases like “shrooms” or “magic mushrooms.” Part of its popularity is doubtless due to the fact that it grows wild across much of the world, basically anywhere its favorite foods, the dung of horses and cattle, can be found, provided the climate isn’t too cold. It’s also easy to cultivate and naturally variable—meaning the species lends itself to the creation of special strains, such as the Redspore.

It’s worth noting that P. cubensis, like most of the other psychoactive mushrooms currently popular, owes most of its activity to psilocybin. Thus, most of these mushrooms produce roughly similar effects and play by the same rules, as it were. But there are psychoactive mushrooms that play by different rules, such as the psychoactive Amanitas. Their biochemistry is very different. While psilocybin is not risk-free and certainly deserves respect, the Amanitas are dangerous unless processed properly and handled with extreme care. The point is that not all psych activity is the same.

It’s also worth noting that psilocybin, and any mushrooms that contain it, are illegal to use or even possess in most jurisdictions. Please do not use any information in this article to go to prison.

Because these mushrooms owe most of their activity to psilocybin, their effects are essentially those of psilocybin—these are known to include alterations in mood and thought-pattern, as well as hallucinations. It’s the hallucinations that are most famous, to the point that non-users typically refer to psilocybin simply as a hallucinogen. Actually, at very low doses, the substance is not hallucinogenic at all. Even at moderate recreational doses, the hallucinations are typically subtle. Walls may breathe, objects may look “geometric” or “Jello-like,” and colors may become more intense. Only at high doses do the hallucinations start to seriously compete with the real world, and by then the user’s thinking will have become very bizarre, perhaps frightening or perhaps enlightening.

There is also what’s called body buzz or body load, sometimes difficulty with movement or balance, and feelings of either lethargy or energy. Some users like these sensations, others do not. Nausea is common as well, but users tend to ignore it fairly well. It is in these body effects that PF Redspore is said to be strongest, sometimes to the extent of inducing temporary paralysis.

Whether different strains actually do cause qualitatively different experiences (as opposed to simply varying in potency) is debatable. Certainly trips vary. Much depends on the user’s own biochemistry, current mental state, and immediate surroundings. Psilocybin is said to intensify a user’s current mood, for better or worse. Whether a user can really choose a particular kind of trip by selecting the right strain, or if that is an illusion based on coincidence and confirmation bias, is an open question.

PF Redspore is considered relatively potent, meaning users can take less than they would of an average P. cubensis strain to get the same intensity of experience. It’s possible to calculate such an average dose size to start with based on the user’s body weight, whether the mushroom is dried or fresh, and what intensity of experience the user wants (micro, beginner, experienced, intense, or heroic, generally)[iii]. But these kinds of calculations can only ever be a starting point, since human sensitivity to psilocybin varies tremendously.

Until a user learns how psilocybin effects them and what doses of various sizes typically do for them, it’s best to be very cautious and err on the side of taking too little rather than too much. Unpleasant and even dangerous effects become much more likely at higher doses and even at doses that may not be that high overall can be a problem if they are more than the user has prepared for.

Popular methods of consumption for PF Redspore include Lemon Tek and Shroom Tea.

PF Redspore is considered moderately aggressive in growth, meaning its typical colonization time may be on the short side of average. The spores, being paler than typical for the species, can be hard to see and therefore a little difficult to work with. And while information on cultivating this strain is hard to find, if it’s anything like the PF Classic, it may be a picky grower, too—PF Tek is the only method PF’s strains do very well on.

Whether to grow psilocybin mushrooms or buy them is a personal decision that depends on a user’s interests and circumstances.

If you want a steady supply and really like the strain, growing a crop of Redspore is a good bet. Mushroom cultivation is an interesting and rewarding hobby, plus it’s dramatically cheaper on a per-dose basis that buying mature mushrooms[iv]. This price advantage is especially clear for growers who collect spores from their own crop with which to start the cycle over again—the process can be repeated indefinitely, with only low-cost substrate materials needing to be replaced.

Homegrown mushrooms have more reliable quality, too[v], given that you can’t sue a seller for false advertising if the product is illegal. And the law itself is relevant in other ways[vi], in that in some areas buying spores, or even growing the mushrooms, is legal, even though eating or buying the mushrooms definitely is not. In other areas, of course, growing at home could involve the greater legal jeopardy. It’s important to understand the law in your jurisdiction.

But for people who want mushrooms now not two months from now, or who only want a dose or two and not a large supply, or for those in jurisdictions where having a large supply on hand for an extended period is a legally risky thing to do, buying a few doses is the better option.