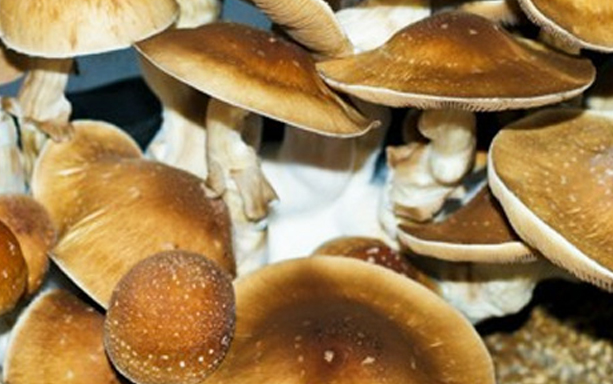 “Psilocybe Fanaticus” looks like a scientific name along the lines of Psilocybe cubensis, but it isn’t. Instead, it’s the nickname of a man, Robert McPherson, and the nickname, too, of a strain of P. cubensis he developed, also called the PF Classic. The PF in PF Tek is him, too.

PF Classic[i] is indeed a classic cube, popular with users, but not as commonly grown.  Just like P. cubensis as a whole, it is physically variable, with a stem that may be short or tall thick or thin, spongy or fibrous. The veil does not tear until the mushroom is fully mature, meaning growers can wait until the mushrooms are quite large before harvesting without getting spores everywhere.

P.cubensis is a naturally variable species, so a great many of its variations have been found, isolated, named, and cultivated as separate strains. The species also grows wild across much of the world, wherever its favorite food, the dung of large mammals, occurs. Of whatever strain, it is among the most popular hallucinogenic mushrooms in the world, the one usually meant by phrases like “shrooms” or “magic mushrooms.” There are other contenders, other species that contain the same active ingredient, psilocybin, plus others that instead contain moscimol, a very different hallucinogen that causes a very different kind of experience when eaten.

Unlike the moscimol-containing species, which also contain a toxin and must be processed properly if they are to be used safely, P. cubensis is essentially non-toxic (unless you count psychoactivity itself as a form of toxicity, as some do), but use is not entirely without risk. Mild side effects, such as nausea and excessive yawning, are common. More serious problems, notably anxiety—sometimes very intense—occur as well, and are the chief reason why it’s better never to trip alone. A sober friend can provide comfort and stability if anxiety comes up (and can take care of any practical matters that may be difficult to attend to in an altered state). Even more serious problems are rare, but possible.

Then there is legal risk. Psilocybin is illegal in most jurisdictions. Please do not go to prison.

P.cubensis in general causes a range of effects, usually including euphoria, insight, and hallucinations—except at very high doses, these are usually fairly subtle, along the lines of walls appearing to breathe or tree branches looking weirdly geometric, rather than the little green men and other such visions that non-users may assume hallucination involves. There may also be either lethargic feelings or a rush of energy, as well as an odd feeling sometimes referred to as body buzz or body load that some users like and others don’t.

Trips vary. They vary depending on the dose taken, the biochemistry of the user, and the circumstances and mental state (“set and setting”) of the user at the time. Whether the strain chosen is also a factor is debatable. Some people say that although potency varies between strains, the idea that different strains have different effects is just as inaccurate as the stories about some kinds of alcohol causing mean drunks or friendly drunks and so forth. And yet every strain is said to have its own personality, its own kind of trip, and many users have their favorites.

In the case of PF, descriptions differ wildly, with some people referring to it as a gently strain, similar to using cannabis, ideal for beginners, and others calling it one of the most intense, and intensely visual, experiences they’ve had.

PF Classic is widely considered one of the more potent strains, meaning users should take less than they would with other strains in order to get the same intensity of experience. People who don’t get have a good sense of an average dose size to start from can calculate it using their own body weight, whether the mushroom is fresh or dried, and whether the user wants a light dose, an intense trip, or something else[ii]. However, such calculations can only yield a rough estimate because physical sensitivity varies from user to user, and because potency varies even within the strain. PF Classic might be a wise mushroom to start out microdosing with to see how it effects you.

Popular methods of consumption for PF Classic include Lemon Tek and Shroom Tea.

PF grows slowly (implying a long colonization time as well, though finding detailed grow descriptions is difficult), but fruits abundantly when it does finally fruit. Spore release is especially late, a definite advantage for growers who want a clean set-up. The strain has an unusual limitation; although it does very well with PF Tek, especially on rice, it does not do well with other growth methods.

Whether to grow magic mushrooms or buy shrooms depends on a user’s circumstances.

People who want a steady supply of shrooms and don’t mind having large batches that are all the same strain will likely prefer growing. It’s not just an interesting and rewarding hobby, it’s also dramatically cheaper on a per-dose basis[iii]. The quality is also much more reliable[iv], given that there is obviously no regulation of a market that is illegal in most areas. And speaking of legality, the law varies in interesting ways[v] such that in many areas buying spores, or even growing mushrooms, is legal, even when eating the mushrooms definitely is not. Growing is thus much less likely to cause legal problems than is buying doses from a dealer. It’s very important to check the law in your area, though (and not to take legal advice from online mushroom articles).

Growers also have the advantage of being able to keep a strain growing indefinitely without having to buy more spores at all (though new substrate material must still be sourced). Just allow a mushroom to mature to the point where it starts releasing spores, take a spore print, and use the print to make a new syringe for inoculating the next grow.

But there are people who don’t want a large supply of a single strain. These include novices who don’t know if they’ll even like shrooms, experienced users who want a lot of variety in the strains they choose, and anyone who lives in a jurisdiction where personal use has been decriminalized but cultivation has not been. For all of them, buying a dose or a few doses at a time is the better bet.