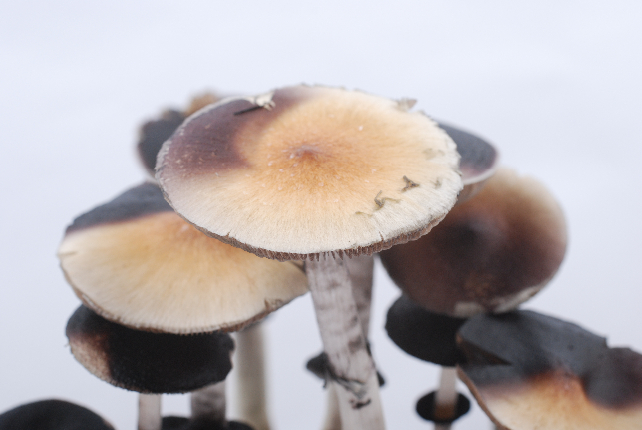 Orissa[i], or Orissa India, is a cultivated strain of Psilocybe cubensis, one of the most popular hallucinogenic mushroom species in the world. Orissa is, indeed, from India, where it was a natural variant collected from the wild. It likes growing in elephant dung best, and can produce extremely large mushrooms. And hardly anybody seems to know anything else about it—site after site repeats those few talking points, and nothing else.

Fortunately, a lot is known about P. cubensis generally. It is usually a medium-sized gilled mushroom with a light brown cap. A partial veil covers the gills until they get close to ready to release spores. But perhaps because the species can be found over much of the world—basically, wherever mammal dung is available for the fungus to eat—it can vary a lot in shape, size, color, and psilocybin content. Many of its cultivated strains were, like Orissa, found growing wild. Others were developed by growers. The species does have a few look-alikes, including some that are toxic, so collecting and using wild-grown mushrooms is not recommended for the non—expert.

Provided the mushroom really is P. cubensis, eating it is a relatively safe way to trip, but mild side effects, such as nausea or excessive yawning, are typical. More severe problems, notably anxiety, which can be intense, are not uncommon. Worse problems are rare but possible. It’s important that users pay attention to safety, taking care not to take too much, and having a trusted sober friend on hand to provide any necessary support.

And speaking of safety, it’s important for users to become familiar with applicable drug laws for their area, since psilocybin in illegal in many jurisdictions, and going to prison is seldom a good trip.

P.cubensis is what most people mean by “shrooms,” or “magic mushrooms,” or other such phrases, but the phrases can also be applied to other hallucinogenic mushroom species, both others that contain psilocybin, the same “active ingredient” in P. cubensis, and a few Amanita species that contain moscimol instead and therefore provide a very different experience.

How much the various Psilocybes differ from each other is debatable, and how much the trips provided by all the different P. cubensis strains vary is even more debatable. Some people claim that the only difference between strains is potency. Of course trip experiences vary, but that could have more to do with the user’s biochemistry and current mental state than the strain of the mushroom. Others insist that each strain has its own character, its own distinctive effects.

Orissa[ii] is known as a very physical strain; some people like the heavy body buzz, others do not. Visuals are often intense.

Dosage for any P. cubensis is a little trickier than many people seem to think. Yes, it’s possible to calculate[iii]  a basic dose from the user’s weight, whether the mushrooms are fresh or dried, and what intensity of experience to user wants. Orissa is considered unusually potent by some users, so the thing to do would then be to use a slightly smaller dose than the calculation suggests. But the problem is that potency can vary from mushroom even within the same strain, plus the sensitivity of users also varies. It’s always best to start out microdosing and dial it in from there. The bottom line is that some trial and error may be necessary.

Popular methods of consumption for Orissa India include Lemon Tek and Shroom Tea.

Although Orissa does best on dung, producing very big fruits, it can grow on virtually any commonly-used substrate type. Colonization time is about average, usually 10-14 days[iv]. It can be grown in a PF Tek, Shotgun Fruiting Chamber or Monotub Tek.

People interested in getting their hands on some Orissa can grow it or buy it. Each has its advantages and disadvantages.

Part of the decision depends on on the legal status of psilocybin where the user lives[v]. If personal use of psilocybin has been decriminalized, but possession remains illegal, then buying a dose or two as needed may be the best choice. In other areas, growing magic mushrooms or even buying spores, may actually be legal even if eating them is not, in which case buying doses has no advantage and could even be more risky.

Legality aside, growing is dramatically cheaper per dose[vi]. Not only are spores themselves quite affordable, but they really only need to be bought once; while shrooms are usually harvested before the veil tears, just let one or two mushrooms mature and then take a spore print and use those spores to start a whole new batch. The process can be repeated indefinitely for just the cost of new substrate material.

Growing, too, gives more predictable quality[vii]. Although many sellers are competent and trustworthy, if one isn’t and sells old product with no potency or causes some other problem, there isn’t much the buyer can do about it.

But for all the advantages of growing, some users just don’t want a vast amount of a single strain sitting around. For beginners who don’t know whether they’ll ever want a second dose, or for old hands who want to try a different strain every week, buying mushrooms by the dose may be by far the better bet.