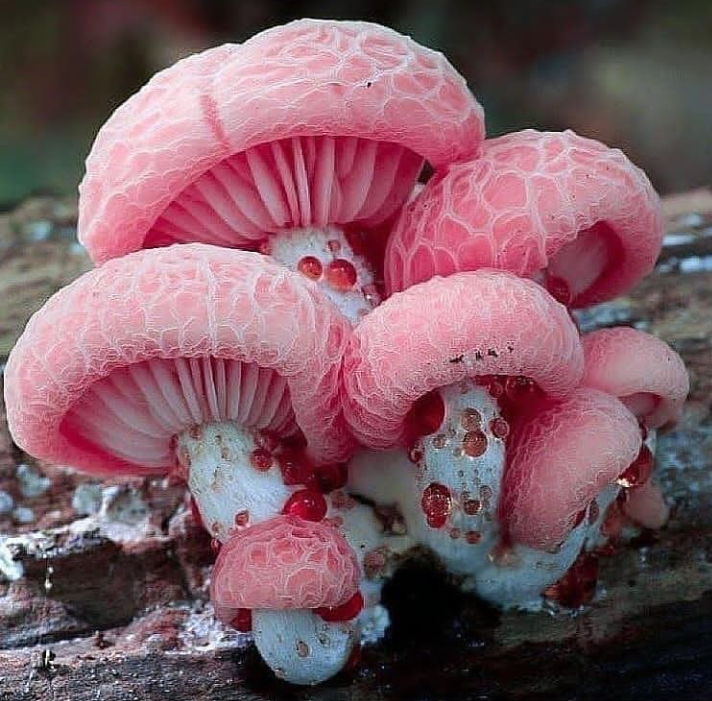 Rhodotus Palmatus is a unique single species of mushrooms. In 1785, a French botanist, Jean Baptiste Francois (Pierre)  Bulliard, first described this mushroom as Agaricus Palmatus. Another Frenchman, mycologist Charles Joseph Ernest Maire, moved it to a newly discovered genus Rhodotus in 1926. The scientific name, Rhodotus Pamatus, came into the limelight. The specific epithet, Palmatus, originated from Latin, meaning shaped like a hand—probably inspired by the look of the cap surface similar to the lines in the palm of our hand. This rare species has a circumboreal distribution and is available in the northeastern USA, northern Africa, Europe, and the outskirts of Asia. This mushroom is also known as Wrinkled Peach, Rosy vein cap, and netted Rhodotus. Rhodotus usually thrives on dead or rotting trunks and branches of deciduous wood like elm, horse-chestnut, and ash.

The International Union for Conservation of Nature’s Red List of Threatened Species (IUCN Red list) classifies wrinkled peach among the most endangered mushroom species due to the reduction of elm and ash wood caused by fungal diseases and removal of dead woods. Logging and harvesting of woods for biological resource uses are also responsible for reducing the natural habitat of Rhodotus Palmatus. Dutch elm disease is among the deadliest tree diseases affecting the growth of this mushroom. This deadly disease has killed over 60 million elms. While many people say it has no smell, but a small fraction are convinced it has a strong odor strong, minty, and smells like camphor. Many reports discuss the edibility of this mushroom, but it is generally classified as an inedible mushroom with a somewhat bitter taste. The surface of the mushroom looks slimy, and the inner parts are solid and rubbery.

Rhodotus Palmatus is usually pink but has several color variations that range from orange, pale peach to even yellow. The appearance slightly differs. Some variations have a smooth cap, while others a more defined cap wrinkles resembling the wrinkles on our hand (the term wrinkled comes into play). In 1980, three researchers Orson Miller, John Palmer, and Linnea Gillman, embarked on a mission to solve the mystery of wrinkled peach’s varying appearance.  They succeeded and unveiled that the spectrum of light penetrating the forest floor plays a role in the species variability. They discovered that most other species use light from the short blue wavelength during different phases of their development. These researchers figured out that the fruiting of Netted Palmatus is affected by more extended yellow, red and green wavelengths of the visible spectrum.

More laboratory studies by those three researchers revealed that fruiting bodies formed deep wrinkles and looked more peach under more green light. In the forest, this trait will be seen on Rhodotus mushroom thriving under a dense green canopy as broadleaf trees hinder the penetration of the blue and red spectrum. It aids the progression of more green light. In red and yellow light spectrum thriving regions, the fruiting bodies produce fewer wrinkles and looked pale or more orange. This trait is visible in a broadleaf forest during fall, where the red and yellow light spectrum freely penetrates the region.

Cap: Initially has a nearly spherical form, but develop a curved inward margin, and finally nearly flattenings; pink at its young age, and eventually becomes pink colored. The hard cap skin (pellicle), which can be removed totally, is thick and jerry-like. It is wrinkled and is networked like interconnected ridges. Mature caps range from 5 to 10 cm in diameter. The flesh of the cap is white. The surface is usually dry, partly moist, and spaced a small distance apart. It is covered in matted hair.
Gills: The equidistant and adnate bends in a curvy manner, with the tooth extending downwards. The ventricose measures up to 10mm, thick, pale yellow with rough, and edges have the same color. The color of the gill is white when young and becomes light peach to pink when mature.
Stem: The color is pinkish (sometimes white) but has a lighter color than the cap. The stem measures 3cm to 7cm (30mm – 70mm) in length, and 1 to 1.5cm (10mm -15mm) to in diameter. The stem has no stem ring or volva like other mushroom species. It is coated in whitish fibrils, often red or orange droplets. The stem flesh is white but has a little touch of pink. The stems are uniformly curved because of the nature of their habitat.
Smell: Pungent, strong like coal tar or camphor. It has a floury texture when cut.
Taste: The taste is not clearly defined but has a harsh, bitter component.
Spores: Spherical, but has similar (often smooth or irregular) growth covering measuring 8 – 11 x 5 – 7 um.
Spore color: Whitish in a thin print, but pinkish to light yellowish in a thick print.
Edibility: Inedible. It’s unclear if it is poisonous, but it indeed gives an unpleasant taste to the mouth.
Habitat: Feeds on dead or decaying hardwood trunks and branches, mainly fallen elms, ash, or even other broadleaf woods.

Rhodotus Palmatus is the only species (i.e. monotypic) in the Rhototum. Thus, it is difficult to deduce its look-alikes. Its unique features and mysterious nature make it challenging to designate it to another mushroom family or associate it with other mushrooms.

The subject of Rhodotus Palmatus edibility is still unclear as the mushroom has undergone little (or no) clinical trials to show its effects on the body. Therefore, there is no recommendation on its dosage. This mushroom is mainly categorized as inedible or unknown.

There is no concrete evidence to show the toxicity level of this mushroom. Limited scientific trials have made it even more difficult to tell its effects on the body. The species is rare and endangered.

3 thoughts on “Rhodotus Palmatus: All About The Wrinkled Peach Mushroom”