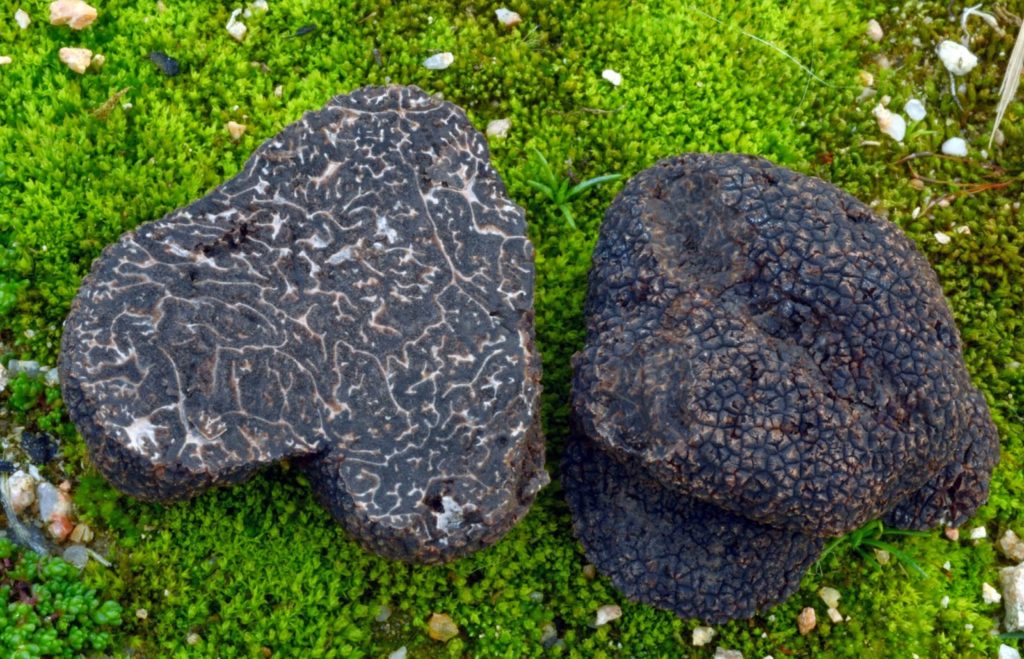 Tuber melanosporum, is also known as Périgord truffle, Périgord black truffle, Black truffle and French black truffle is a genuinely exquisite edible specimen that is widely revered and also one of the most expensive mushrooms in the world. This is the reason that truffles are also referred to as underground gold. The aroma of these truffles is what characterizes them and is due to volatile organic compounds secreted by their fruiting bodies, including alcohols, ketones, aldehyde and sulphur.

In 1831 Italian mycologist Carlo Vittadini described and named the mushroom as Tuber melanosporum, and this scientific name is still generally accepted. However, other synonyms include Tuber gulosorum, Tuber gulonum, Pico Tuber nigrum and Tuber cibarium. Tuber is the Latin word for swelling or lump and melanosporum translates to ‘with black spores’ a defining feature of this dark truffle.

Tuber melanosporum has a symbiotic relationship with the roots of hazelnut and oak trees. Since they grow underground, the mushrooms rely on being dug up and eaten by animals. Once the spores have been excreted by the animals, they are able to produce new mycelium that will hopefully be able to link up with another root system to survive and produce future fruiting bodies. The excrement itself also serves as a natural fertilizer for the mushroom encouraging its growth.

Tuber melanosporum is found naturally in South Europe, in particular France Spain, and Italy and have to varying degrees of success been cultivated elsewhere. It continues to remain resistant to large-scale cultivation which assists in keeping its monetary value high. Tuber melanosporum has been used for hundreds of years, and by the 15th century, French citizens considered the Tuber melanosporum, the most prized fungus in all of the French cuisine – the main truffle grounds were Périgord and Provence-Alpes-Cote d’Azur.

The area within which these Périgord truffles are found are often kept a secret due to their value. Professional truffle hunters will use dogs and pigs to search for these truffles, the sensitivity of their smell enables them to search them out from above the ground, and they will then dig them up. They are very expensive and for this reason in culinary dishes are often shaved very thin and used sparingly. The truffles are used to enhance the flavor of meat, fish, soup and pasta. Aromatic compounds make the aroma of Tuber melanosporum, more intense with cooking.

Fruiting body: There is no regular shape; it is bulbous or even multi-lobed. The color is dark-brown to black. Crazy-paving-like pattens adorn the outside, shaped by a network of grooves; appearing as wart-like structures but not prominent. Generally, 2-3 cm in diameter (small nut) but can grow to the size of an orange; firm to touch with a little softness. Weigh from 50 – 200g. Inside the truffle, white lines highlight the spore-producing material; producing a random patterned effect against dark flesh.
Smell: Strong, distinctive, earthy and sometimes described as fruity. The aromatic compounds underlie the luxury surrounding this truffle.
Taste: Strong, distinctive, some describe as sweet and others a bit bitter; long-lasting taste.
Spores: Epsiloidal.
Spore color: Varying shades of brown from light to mid colored.
Edibility: Edible and considered a delicacy worldwide.
Habitat: Oak trees, Cork Oaks, Hornbeam, Hazelnut and sometimes Pine trees. Prefers to grow in ridges or slopes where water does not collect. Prefer to face West or South.  Prevents other plants from growing and can create a vegetation free and burnt looking environment. Thrive in porous alkaline soils; sites can be modified to provide a good environment for truffles to grow. Natural truffle habitat is scarce and often dispersed.

Season: Generally, the season period is late Summer and August. In far South Europe, they are found through Winter also.

The Tuber melanosporum looks very similar to a Chinese truffle that is less expensive called Tuber indicum. There is a genetic test that can be carried out to ensure authenticity and avoid fraud. Summer truffle Tuber aestivum is dark brown with wart-like protrusions on the outside, and its spore producing material is white like in the Tuber melanosporum however, the flesh is lighter inside. The winter truffle, Tuber brumales is also similar but with flesh that is a lighter color.

Not only is Tuber melanosporum a valuable edible fungus it also contains 19 different fatty acids, 17 amino acids, 7 minerals and 6 vitamins and therefore, has nutritional value. The scientific evidence supporting the use of Tuber melanosporum as a health benefit have been of growing concern in the last few years. There is no human data, but there is some interesting research coming from animal models and in vitro.

Using a mouse model to examine anti-fatigue properties after two weeks of Tuber Tuber melanosporum administration and monitoring endurance in specific tests, including swimming. It was shown that administration of the truffle (0.25g/kg – 1.0g/kg) increased hepatic and muscular ATP (ATP is a currency for energy) and in support of this, there were decreased levels of specific exercise-induced metabolites, including lactic acid. These results were compared to mice not receiving Tuber melanosporum [1.].

The study above assessing the anti-fatigue effects of Tuber melanosporum also saw an increase in male and female hormones levels of progesterone, testosterone and estradiol. Some effects observed were sex-specific, and overall the mechanisms of action were not understood; however, the authors suggest that this may be one of the methods for reducing fatigue [1] and further work is required to clarify this.

In a rat model with enforced high blood sugar levels (hyperglycemia) to represent the effects seen in diabetes, the administration of Tuber melanosporum was able to reduce the levels of glucose in the serum [2.]. The progression of diabetes is not only associated with hyperglycemia but also increased lipids (hyperlipidemia) and oxidative stress. Eight weeks of administration of Tuber melanosporum (0.2-0.4g/kg) to mice saw a decrease in body weight and plasma glucose levels. Furthermore, a decrease in triglycerides (fatty acids) and total cholesterol was seen; however, an increase in high density lipoprotein (good cholesterol) was observed. This suggests that Tuber melanosporum may be able to bring down glucose levels in diabetics, in addition, to be able to modulate fatty acid/lipid levels [3.].

Damage to the kidneys can occur in diabetes called Diabetic nephropathy. One of the driving factors may be the infiltration of inflammatory factors that further damage the kidneys. It has been shown that in diabetic mouse models, inflammation markers of the kidney and serum are reduced [3.]. This provides a potential platform for further research into the use of Tuber melanosporum in diabetes and diabetic complications that require additional and long-term treatment.

Using a fermentation process, polysaccharides extracted from Tuber melanosporum mycelia (and other Tuber members) were able to show some inhibition of cells in vitro. This evidence was only preliminary findings but is worth following any future research in relation to cancer to identify any true anti-tumor properties [4.].

It is suggested that Tuber melanosporum contains anandamide, a compound involved in enhancing mood in humans in the same way that tetrahydrocannabinol (THC) in marijuana does. It is thought this compound is produced to attract animals to the truffle in order to dig it up; therefore, providing a greater chance of reproduction. Its mood enhancing effects have led to anandamide in truffles being described as a ‘bliss molecule’ however, these effects need to be corroborated in humans by solid science.

Fresh Tuber melanosporum is highly perishable, appropriate storage and transport conditions should be observed to preserve its flavor and bioactive capabilities.