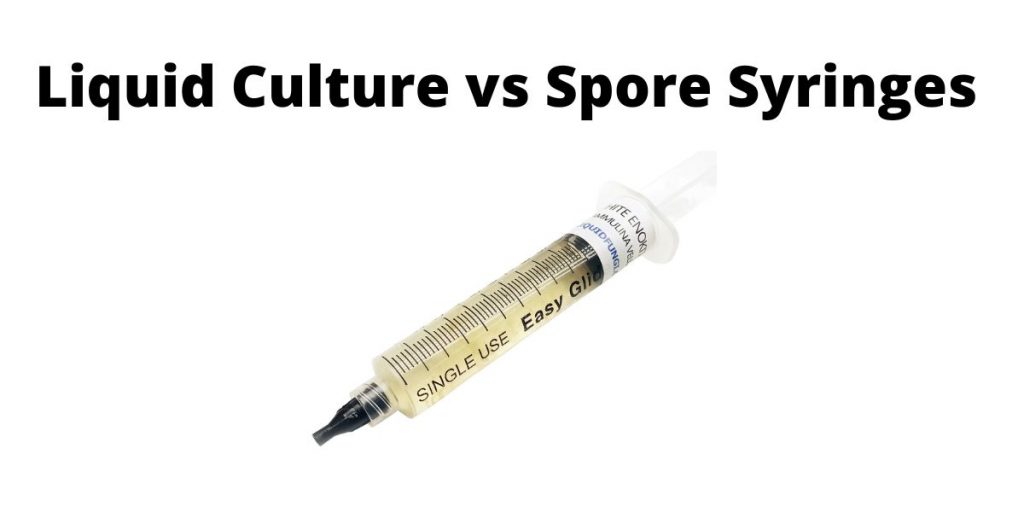 Anyone looking into growing their own mushrooms quickly encounters discussion of both spore syringes and liquid culture syringes. Both can be used to start a new grow, but it’s not always clear which one is the better bet to buy—sometimes it’s even hard to figure out what the difference between the two is.

Here’s a quick introduction that should clear things up[i][ii][iii]. 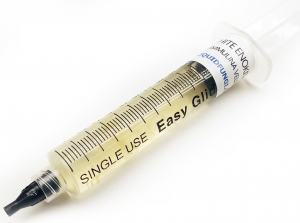 To start, let’s review what spores are.

Many people say that a spore is something like a seed. But fungi aren’t plants, and they don’t have seeds. Spores are much smaller, for one thing. For another, what starts growing when a spore germinates is, genetically speaking, only half a fungus. It has to mate with another half-fungus—the two grow towards each other and merge. Then a new, genetically whole individual grows out from that point of merger, creating a network of fungal threads (the mycelium) and, eventually, mushrooms producing spores of their own.

What all this means for growers is that you couldn’t start a grow with just one spore, even if you could isolate just one (which you couldn’t, they are too small)—and when you grow from spores, you get new, unique, genetic individuals. That distinction will be important later.

What Is a Spore Syringe?

Sometimes the spores in the water will form clumps you can see floating around. If they don’t clump, you won’t be able to see them. Water with spores in it can look the same as water without.

You can buy spore syringes, or you can make your own from a spore print.

What Are the Cons of Spore Syringes?

Using a spore syringe to start a grow has several serious disadvantages. Most seriously, there is no way to sterilize spores—any sterilization method you tried would kill the spores also. The syringe solution is made with sterile water, and all the other elements for starting a grow—the substrate, containers, and so forth, are sterilized, so avoid adding extra contamination, but it’s likely the mushroom spores had some bacteria or mold spores clinging to them when the solution was made.

There’s also the issue of genetics. Remember that a fungus grown from spores is a new genetic individual. It can still belong to a strain in the same way that a puppy can belong to a breed, but it won’t be exactly like its parents, and that means its mushroom production won’t be entirely predictable. In fact, your grow will almost certainly involve more than one genetic individual in the same substrate, so you could end up with some variety in your mushrooms.

Starting a grow with spores is hit or miss. A lot of people actually don’t use spores to start their grows—they use them to make liquid cultures.

What Are the Pros of Spore Syringes?

Spores are necessary if you’re going to be developing a strain on your own or doing other more advanced work. A syringe of spores can also be kept for a long time, as the spores don’t go bad easily. There is also a specific circumstance where spores are useful for starting a grow—if you are growing psilocybin mushrooms.

Psilocybin is illegal to possess in many jurisdictions. That means mushrooms that produce psilocybin are illegal to possess. But the spores of psilocybin-containing mushrooms don’t contain psilocybin—none is produced until germination. So, while there are jurisdictions that have laws against the spores of these species also, in most places the spores can be bought and sold legally. Even people who intend to do something illegal with the spores—grow psychoactive mushrooms—appreciate the security of being able to get the process started without breaking the law.

Now, an advanced grower might use the purchased spores to make liquid culture, but a beginner won’t have the know-how or the equipment to do so. For them, starting a grow with spores is very much the thing to do. 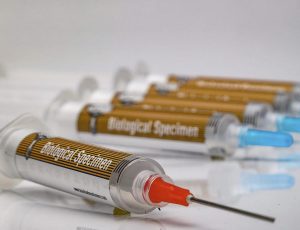 Liquid culture is a small amount of mycelium floating in some kind of nutritive liquid, such as diluted honey. It, too, can be bought in syringes and used to inoculate a substrate to begin a grow. The mycelium might be visible as a cloudiness in the liquid, or it might now. Although a syringe of spores and a syringe of liquid culture look very much alike, in many ways they are opposites. The advantages of the one are the disadvantages of the other, and vice versa.

How to Make Liquid Culture?

There are two ways to begin to make a liquid culture. One way is to germinate some spores on an agar plate. The other is to take a sample of mycelium or a piece of mushroom from an established fungus and persuade it to grow on the agar. In either case, it is likely that bacteria and mold, present on the fungal tissue, will also grow on the agar, but the colonies of each will look recognizably different. Unless one of the contaminants grows so quickly that it completely overruns the agar, there will be areas of the plate where nothing but the fungus you want is growing. The next step is to transfer a little of that pure fungus to a second agar plate, leaving the contamination behind.

By transferring only clean mycelium from plate to plate, it’s possible to get a pure, uncontaminated culture that is genetically identical to whatever it came from. This culture can then be introduced to a liquid medium for convenient storage and later injection into some substrate.

There are people who skip the middle step, though, and simply sell germinated spores as liquid culture. Inasmuch as these are samples of living mycelium in a liquid growth medium, they are liquid culture, but these have none of the advantages of high-quality liquid culture. They are called “multispore” cultures because they contain more than one genetic individual. They are cheaper to make, but there isn’t much point in buying them. If you want multispore samples, just get spore syringes.

What Are the Cons of Liquid Culture?

What Are the Pros of Liquid Culture?

The advantages of using liquid culture to start a grow are that you don’t have to wait for germination, don’t have to worry about contamination (unless you accidentally introduce some yourself), and can be absolutely sure your mushrooms will end up the same as whatever strain the culture came from.

So, if you want to grow culinary or legal medicinal mushrooms, liquid culture is by far the better bet, especially if you are growing a product for sale and want both speed and consistency.

If you want to develop your own strain, or if you are particularly interested in spores and want to study them through a microscope, you will need spore syringes (or spore prints).

Spore syringes are also a good idea if you know it’s going to be a long time before you can begin your grow, or if you want to grow something that produces psilocybin—in the latter case, you may find that the strain you want isn’t available in liquid culture anyway. You may want to use your new spore syringes to make liquid culture, but if you don’t know how to do that, you can start your grow with spores. Just use lots of small jars, rather than a few big ones, because chances are some will be contaminated. Others might not be, or the mycelium you want might successfully compete against the contaminants and force them to stop growing. With luck, one or more jars will turn out well, and then you are good to go.