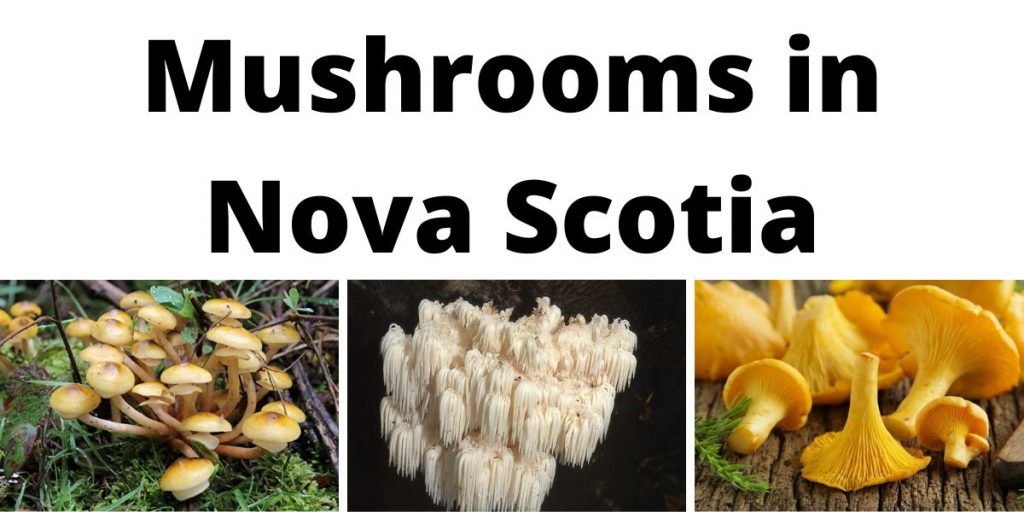 Nova Scotia is small, as Canadian provinces go, but it has its share of mushroom species, perhaps thanks to its relatively warm, well-watered summers[i]. Here, let us give you a small sampling of what Nova Scotia has to offer mycophiles[ii].

Yes, many of Nova Scotia’s mushroom species are good to eat. In fact, it’s possible most mushrooms are edible (the status of some is not known). Foraging for wild mushrooms is a fascinating hobby that appeals to a lot of people. It’s not a hobby you should jump into based on an online article like this one, though. Foraging safely requires extensive study—mistakes are a lot easier for beginners than beginners usually think.

This article is meant simply to encourage you to learn more.

Ensure you have the proper tools before you go mushroom hunting, take a quality knife with you and a basket/bag for your haul!

Please do not use this list as a replacement for a field guide, spore prints, an identification app or an in person guide. 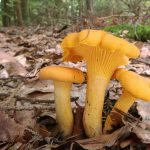 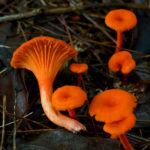 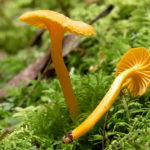 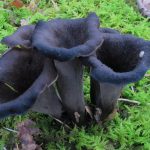 Chanterelles are a group of well-known, popular edible mushrooms, notable for having ridges or veins rather than gills and, usually, a shape like the bell of a trumpet. True chanterelles are all in the genus, Cantharellus, all of which are edible with an unusual, fruity flavor. However, there are several similar genera that are closely related and look quite similar. Some of these are also edible and can be, rather loosely, called chanterelles, too. 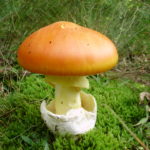 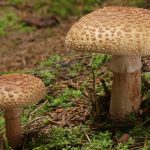 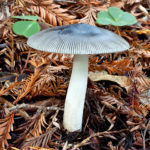 Many experienced foragers will not eat any Amanita, and with good reason—the genus includes the most dangerously poisonous mushroom species in the world. And figuring out that you’ve got an Amanita is often easier than figuring out which Amanita you’ve got. The prospect of picking the wrong one is just too scary. Nevertheless, some members of this genus are safe to eat, and some have a long culinary history.

Caesar’s Mushroom got its name by being the favorite of certain Roman emperors—or, rather, a European species was favored by Caesar. North America has several close look-alikes that can also be called Caesar’s mushroom, but the taxonomy of the group isn’t sorted out yet. The Blusher (Amanita rubescens), a highly variable species that bruises red, is another case where North America probably doesn’t have the European species but instead several other, currently undescribed species of its own[iii]. It does contain a toxin, but one safely destroyed by cooking. The Grisette is yet another confusing group with a well-known European look-alike. The same means “little gray one,” and is a reference to working-class French women who used to wear mostly gray clothing. The mushrooms are quite pretty, in an understated way, but while they are edible they are not choice[iv]. 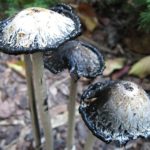 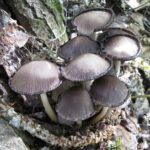 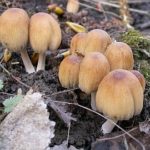 The Inkcaps are not especially related to each other, but they all share the ability to disperse their spores  by converting their mushrooms to inky, black goo at maturity. Many are edible, but misunderstood. Many writers confidently assert that of course these mushrooms can’t be eaten once they start to liquefy—actually, the “ink” makes an interesting food dye and flavoring. Of course, if you want a mushroom, a puddle of ink won’t cut it, so it’s still important to cook Inkcaps promptly, before the gooification begins. The other issue is that many contain a substance that interferes with alcohol metabolism, so if you drink alcohol within a few days of eating these, you’ll get sick. Many writers list these mushrooms as poisonous, but actually it’s the alcohol that’s poisonous. The mushroom won’t hurt you if you take a break from drinking.

Shaggy Mane (Coprinus comatus) does not interfere with alcohol. Common Inkcap (Coprinopsis atramentaria) and Mica Cap (Coprinellus micaceus) both do. 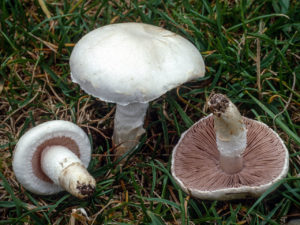 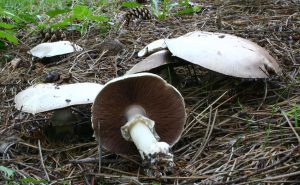 The Agaricus genus originally held nearly all fungi with gills. It has long since been pared down, but still retains the cultivated mushroom and its relatives. Fun fact; the common name of the standard cultivated mushroom you find on pizza and such is “mushroom.” The word was originally quite specific before being applied to an increasingly broad group of fungal fruiting bodies. Technically, then, the members of this genus are also the only  real “wild mushrooms.” In any case, some wild Agaricus species are poisonous, but many are good to eat. Nova Scotia has at least two of these, The Meadow Mushroom (Agaricus campestris) and The Wood Mushroom (Agaricus silvicola). Both bear a superficial but potentially confusing resemblance to some of the most dangerous Amanitas, so paying attention to detail on these is critical. 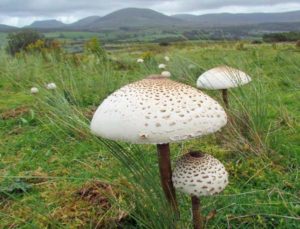 The Parasol mushroom of Nova Scotia (and elsewhere in North America) may or may not be a single species properly known as Macrolepiota procera, a name originally given to European mushrooms. In any case, it is a popular edible with a great many poisonous look-alikes. Some of the closely-related Shaggy Parasols are mildly poisonous. Some of the likewise closely-related Dapperlings (sometimes also called parasols) are deadly. Some of the Amanitas, likewise deadly, could be mistaken for a parasol in a pinch. The point is to be careful. 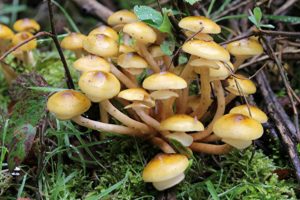 Honey Mushrooms are named for their color, not their taste, but they have long been regarded as a fine edible. More recently, these mushrooms have been known to sicken a few people. It’s not clear whether this is a case of variable toxicity among the mushrooms, variable sensitivity among the humans, something to do with how the mushrooms were prepared, or what. Honey Mushrooms also bear a disturbing resemblance to certain toxic species. Experts advise caution. 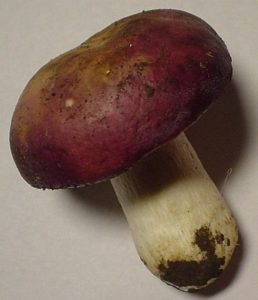 Although some of the best-known Russulas are either toxic or unpalatable, there are edible members of the genus, too. The Shrimp Russula is one of the best, at least when young, and does indeed have a shellfish-like odor. 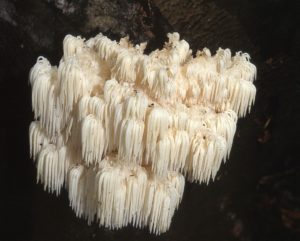 This is actually one of at least two species bearing the common name, Bear’s Head, but they are related and both edible, so mixing the two up is not really a disaster. Hericiums in general are notable for being entirely covered with soft, hairlike spines, often called teeth. Although words like hair, spines, and teeth don’t sound appetizing, these structures aren’t noticeable at all in the mouth.

There is no simple way to tell whether a mushroom is poisonous. All the rules of thumb you may hear of have exceptions, and people who try to follow those rules get sick. You simply have to key the mushroom out, identify it to species, and then look up its status. Bear in mind that there are many species whose edibility is unknown, variable, or subject to debate. Also please bear in mind that this list is not exhaustive—no list is. If you can’t find your mushroom on a list of poisonous species, don’t assume it’s edible.

Few mushrooms are poisonous, and few of those that are are really dangerous. It’s the exceptions you have to watch out for. This is one of several Destroying Angel species scattered across North America and Europe. All are large, handsome, white or whitish mushrooms with enough toxin in their tissues to shut down the kidneys and possibly the liver of anybody who eats one. Those who get medical help quickly sometimes survive—and some even avoid the need for organ transplants. But diagnosis of this type of poisoning is difficult because symptoms don’t appear for a day or more and can go away before suddenly getting much worse. Although mature destroying angels are very distinctive-looking, they are sometimes mistaken for almost every kind of white, edible mushroom out there anyway. Mistakes are easier than they might seem, and so it is very important to always check ALL identifying characteristics, including spore color, and to never eat a mushroom just because it “looks right.”

In their early button or “egg” stage, destroying angels look very much like some of the edible species of puffball. It is therefore necessary to slice any puffball vertically before preparing it as food—the slice will reveal the internal structure. Puffballs should be homogeneous. Young Amanitas show traces of their future parasol-type structure.

Fly agaric is usually not deadly, and if processed properly can even be used for recreational or religious purposes similar to the use of psilocybin mushrooms—although its active ingredient is not psilocybin, and it’s widely considered much less enjoyable even under ideal circumstances. But the real problem is that if this mushroom is not processed properly, it is seriously poisonous. Fatalities are rare, but symptoms are extremely unpleasant, even dangerous. 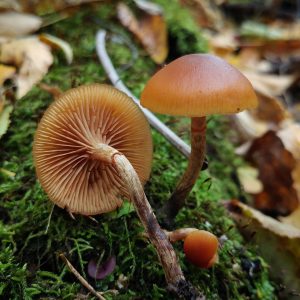 OK, honestly, we haven’t been able to track down any mention of this species occurring in Nova Scotia, but it seems to grow everywhere ELSE, so we frankly suspect it’s here, too. And since it will probably kill you if you eat it, so it’s best to keep it in mind while foraging. Please avoid eating any nondescript little brown mushroom until you are good and sure it isn’t this one. 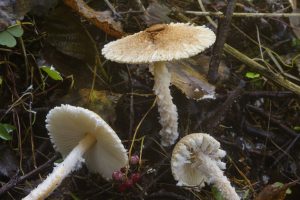 The Shield Dapperling is a curious case, for while it is listed as poisonous[v], we have not been able to find out what exactly happens to someone who eats one. Some Dapperlings contain the same deadly toxins as the Destroying Angels and the Deadly Galerina, but this one doesn’t[vi]. In any case, it’s a pretty little Parasol with a scaly surface, and you should not eat it. 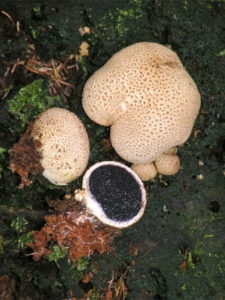 Earthballs are sometimes called false puffballs by people who insist all true puffballs are good to eat. But since “puffball” isn’t a taxonomic term but refers to any ball-shaped mushroom, the Earthballs are Puffballs in good standing. Just don’t eat them. They won’t likely kill you, but will ruin your day.

The most obvious difference between an Earthball and an edible Puffball is that it is firm, like a rubber ball, not soft like a marshmallow. Cut one open, and you’ll see another big difference; except when very young, the interior is very dark.

Many members of the Russula genus have red or reddish caps and white stems and gills. They are almost impossible to identify to species, and the taxonomy is probably mixed up in any case. At least some of them are also able to cause real gastrointestinal woe. It’s probably better, for now, to call all of them “red russulas” but the most well known one is Russula emetica. Do not eat any Red Russula, period.

Magic mushrooms are generally those that contain psilocybin, a mind-altering substance that is not entirely safe or legal to use—but as mind-altering substances go, it is relative safe if used with respect. Several of these species grow wild in Nova Scotia[vii]. But the main problem with trying to forage any of these species that they look more or less exactly like certain dangerously poisonous species. People have died. These are not mushrooms for beginners to gather. 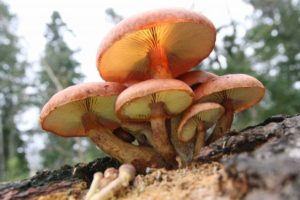 Rustgills[viii] are a confusing group of brownish yellow or orange mushrooms, some of which are psychoactive. It’s not even clear how many species there are. They are not very popular among psychonauts, so there isn’t much published information on what using them is like.

The Mottlegills, or “pans,” as they are often called by psychonauts, include both species that are not psychoactive at all and some of the most potently psychoactive species in the world. The Banded Mottlegill is about in the middle, and it may be the most common. It grows almost throughout North America. 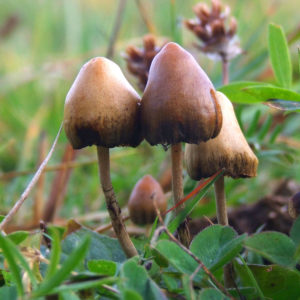 Little Blue Foot (P. caerulipes) is usually of low to moderate potency, but can vary dramatically. Psychonauts take care. Liberty Cap (Psilocybe semilanceata) is a very well-known psychoactive in Europe, but obviously present in North America, too. It is now the type species of the genus and one of the world’s most potent active mushrooms.