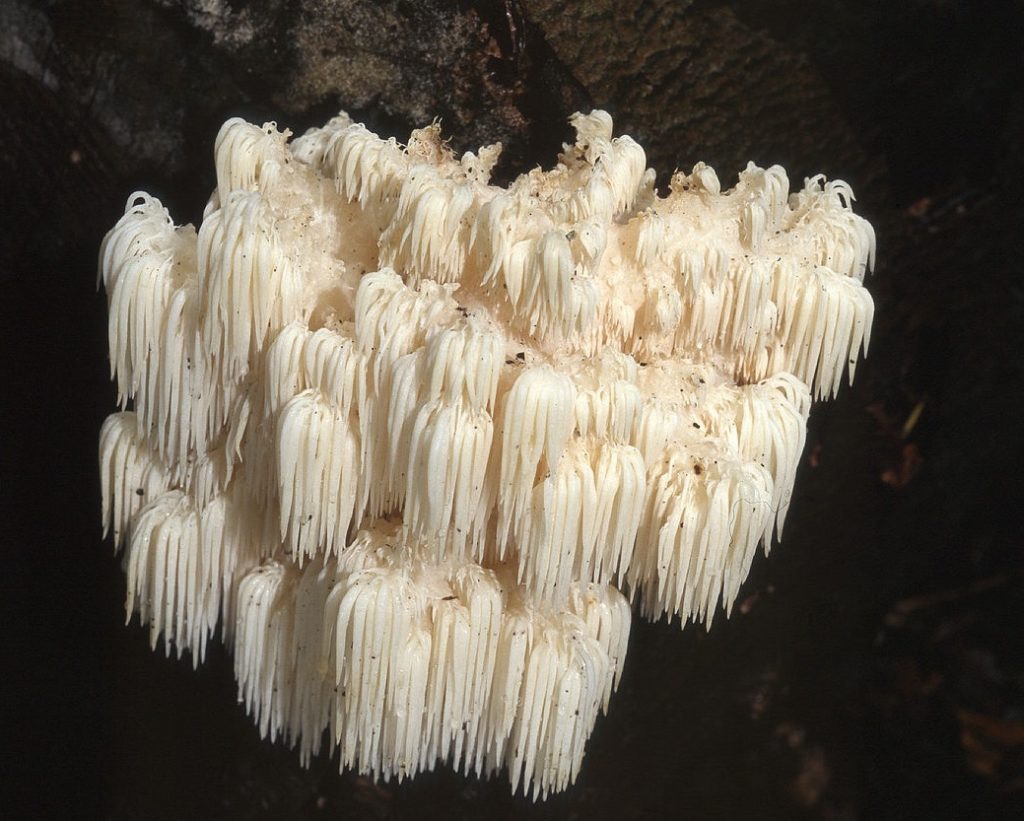 Bear’s-head is part of a group of closely-related tooth fungi (that is, they release their spores from tooth-like or hair-like structures, rather than from gills) that have rather confusing names[i]. To begin with,  they are sometimes all referred to as lion’s mane (a name that more properly refers to H. erinaceus only). Other writers simply refer to Hericium, without specifying which Hericium is meant.

Adding to the confusion is the fact that while Hericium americanum is the currently-accepted scientific name of the bear’s-head tooth, many people still know it by its former name, Hericium coralloides, a name now assigned to a different species, which used to be called Hericium ramosum.

Not surprisingly, some writers take the confusion one step more and refer to a mushroom as “H. americanum or H. ramosum.” What species they mean is not clear[ii].

But just as a rose by any other name would smell as sweet, this mushroom by whatever name is edible and at least reportedly has medicinal value.

Cap: Multiple caps branch from a common stem, all of them entirely covered with long, soft, hair-like or noodle-like spines. The surface is white when young, yellowing with age. The interior flesh is white and does not change when cut.
Gills: No gills. Instead, the spores are borne on soft spines all over the outer surface of the caps. These spines are much longer than in most other Hericium species.
Stem: Branched, except when very immature, and difficult to see because of the spines.
Smell: May smell fishy.
Taste: Nothing useful for ID.
Spores: Elliptical and smooth.
Spore color: White
Edibility: Edible and, for some, choice.
Habitat: Eats dead or sometimes living wood, usually of hardwood species, in eastern North America.

An important characteristic of bear’s head is that the fruiting body is branched. Unfortunately, the long spines make the branching less than obvious. It usually grows on dead wood, but sometimes establishes in and fruits from wounds in living trees.

There are many species that bear their spores on “teeth” or soft spines, but most are unrelated. Spines have developed in fungi many times completely independently.

Hericiums don’t look like anything else (other groups of tooth fungi have very different structures), but they do look like each other, especially when young. Field identification generally depends on branching structure and spine length, but very young specimens might lack branches and have underdeveloped spines. Fortunately for foragers, all the Hericiums are edible and reportedly taste similar.

Two Hericiums are most frequently mixed up with H. americanum[iii]:

The most well-established benefit of H. americanum is that it tastes good. Like other members of its genus, it’s taste is somewhat reminiscent of fish or shellfish, and it can be used to make “crab” cakes and soups, as well as being pan-fried. The long, soft, spines do not give the mushroom a hairy or strange texture. It is possible to buy these mushrooms, so foraging is not the only way to taste them, although some people claim that cultivated examples have less flavor.

There has been very little research into any medicinal potential of this species. Its relative, H. erinaceus, has been extensively researched, and shows real promise as a treatment for maladies as varied as Alzheimer’s disease, cognitive performance, digestive problems, and cancers[iv]. Alternative health practitioners often treat all Hericiums as interchangeable, but while it’s likely these species are biochemically similar and share benefits, there is no guarantee they are identical.

The medical use of this species has not been established, so the proper dosages, if any, aren’t known either.

One caveat is that persons wishing to experiment with H. americanum, bear’s head, for medicinal uses should remember it might well have different, or lesser, effects than its better-studied relative.