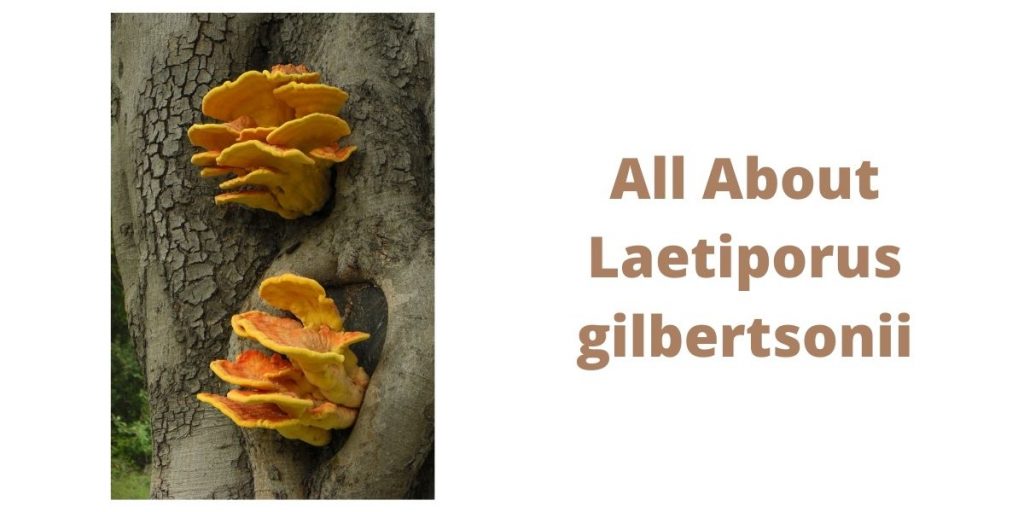 As the name western hardwood sulfur shelf implies, L. gilbertsonii is native to western North America and grows on hardwoods there. People do eat them, usually without problems. The now re-defined L. sulphureus grows only in eastern North America.

Cap: A single fruiting body is usually a large cluster of thin, medium to large, semi-circular or fan-shaped caps. The surface is suede-like. The color is somewhat variable and can fade in older specimens, but they generally have alternating bands of various shades of yellow. The internal flesh is yellowish or whitish, does not change color when cut, and is soft in young specimens but chalky in older ones.
Gills: There are no gills. The spores are released from tiny pores on the underside of the caps. The pore surface is usually distinctively yellow, though there is a variant with a white pore surface as well. The surface does not bruise when handled.
Stem: There is usually no stem, however some individuals have a short, poorly-defined, yellowish stem.
Smell: Nothing useful for identification.
Taste: Nothing useful for identification.
Spores: Ellipsoid and smooth.
Spore color: White.
Edibility: Considered choice, but with caution.
Habitat: Eats either living or dead oaks and eucalypts. Fruits above the ground, either singly or in groups, in the fall or winter.

Chicken mushrooms as a group are relatively easy to recognize; they are all clusters of brightly-colored, non-woody, shelves. The challenge is to determine which chicken is which—as might be suspected of a group that was until recently mistaken for a single species. The key is to remember that each species has a limited range; where the mushroom is growing is the first clue as to its identity.

Virtually all the information available on the benefits of chicken-of-the-woods refer to L. sulphureus, either because the research actually involved L. sulphureus, or because the researchers didn’t know there are more than one chicken species. Most writers assume that all the chicken species are functionally interchangeable—that they all have the same medicinal and nutritional benefits. That could be true, but it might not be. The following should therefore be taken with some caution, since it properly applies to a different species.

Chicken mushrooms as a group are considered choice edibles, and often recommended to beginner foragers because they are relatively easy to identify. They are reported to taste very much like chicken, to the point of making a good chicken substitute in recipes. If L. sulphureus is typical, then they are are quite healthy to eat; a 100g serving has 14 g of protein, 6g of carbohydrate, and just 1g of fat, all of which adds up to just 33 calories[iv].

Like with many mushrooms, there is preliminary evidence to suggest that at least some forms of chicken-of-the-woods contain substances with various medicinal properties, such as antibacterials, anti-carcinogens, anti-oxidants and anti-inflammatories[v].

It’s important to recognize that even if L. gilbertsonii shares all of these same chemical constituents (it may or may not), that does not mean eating it for dinner will cure cancer or anything else. Much of the research on these mushrooms has involved animal studies or pure chemistry without any test subjects at all. Those that did involve human subjects were preliminary. And in virtually all cases, it was a concentrated extract being investigated and not the whole mushroom at all. Whether it’s possible to get a medicinally significant dose by eating the mushroom is simply not known yet.

Like the other members of its genus, L. gilbertsonii has potential as a source of medicinal substances. The lack of conclusive information is only that—a lack of information. It should not be taken as evidence that these mushrooms cannot be helpful. Maybe they can be.

No dosage guidelines have been established yet. Because L. gilbertsonii is edible, getting too much is not a serious concern, except possibly in extreme cases, but it’s likely that eating the mushroom provides too small of a dose to be helpful. In that case, concentrated extracts would be the best option. For proper dosage for them, rely on the judgment of an experienced practitioner.

Some people have gotten mildly ill from eating this mushroom[vi]. The problem appears to be caused by either inadequate cooking or by the advanced age of the specimen in question. Some people consider that specimens growing on eucalypts are toxic (possibly having absorbed oils from their food?), but that has not been confirmed. It’s possible at least some of the confusion regarding which chickens are good to eat is related to differences among the species—some may simply be more toxic than others. It’s also possible some people are more sensitive, or even allergic, to one or another chicken mushroom species.

What is clear is that all chicken mushroom species should only be harvested when young and soft (even if that means not harvesting the whole mushroom) and must be well-cooked before being eaten.

Some people caution that chicken-of-the-woods has poisonous look-alikes. Others insist that there are no look-alikes. The confusion likely results from differences in how well people can identify mushrooms. For example, an experienced forager would never mistake a gilled mushroom for one with pores, but a beginner might. It is human nature to have difficulty noticing distinctions among unfamiliar things, suggesting that only those persons familiar with mushrooms should gather them—even species considered “unmistakable” by experts.