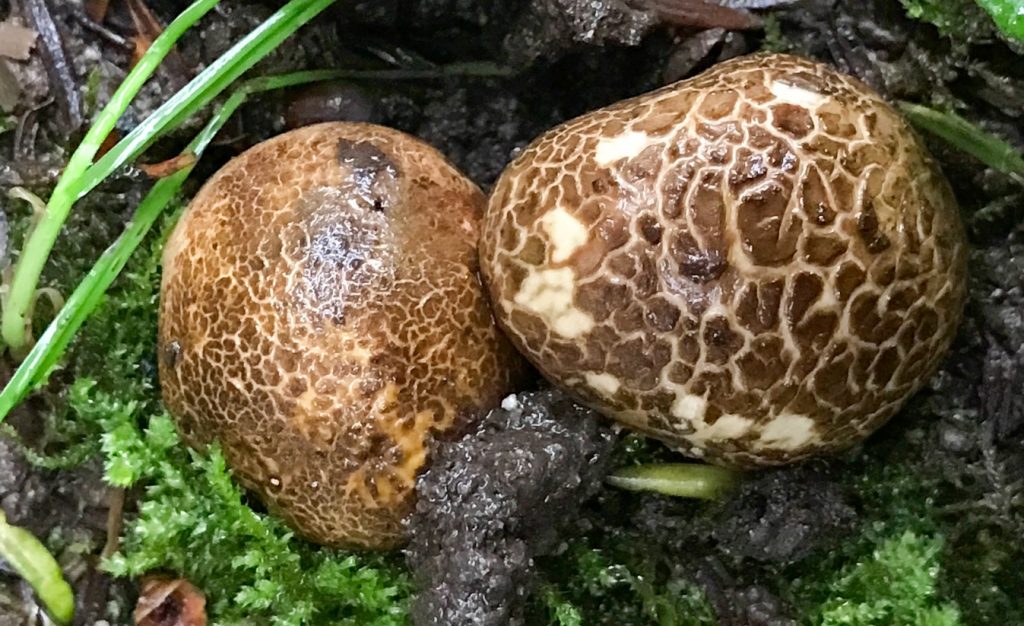 S. cepa[i] is part of a group of puffballs (fungi with spherical fruiting bodies that burst when mature to distribute the spores) known as Earthballs, because they often grow partly or fully buried in the ground[ii]. They should not be confused with earthstars, which are not similar except for the name. Some are sometimes referred to as pigskin puffballs, because of their thick, tough exterior. At least one is the host of a curious and possibly parasitic bolette species that fruits from the bottom of the earthball[iii]. Unlike many puffballs, the earthballs are poisonous. The main reason to know what they are, aside from differentiating them from edible puffballs, is simply that they are interesting. S. cepa is just one example.

Earthballs can be very difficult to identify down to species level without a microscope, because the most distinctive feature of each species is its spores.

Sporocarp: “Sporocarp” refers to the entire fruiting body. It is small to mid-sized, like a slightly flattened ball or cushion in shape. There is no true stem, though the mycelium connecting the sporocarp to the substrate may sometimes be stemlike. The skin is tough and, when young, smooth, developing cracks with age. It is initially white, becoming pinkish or orangish brown. Bruises dark brown if handled. When mature, the skin splits open to expose the spores.
Sporocarp Interior: The interior, which becomes the spores, is initially white, becoming purple-black mixed with white mycelium, then finally dull brown. It is firm in texture, never soft or liquidy.
Smell: Has a musty, mushroomy scent.
Spores: Round and spiny.
Spore color: Dull brown.
Edibility: Poisonous!
Habitat: Fruits from the ground, alone or in groups, often in grassy areas, in gardens, or along paths. Frequently, only part of the flush will be above ground; for every easily visible earthball, several more can be found nearby with a little digging.

S. cepa is mostly an eastern species in North America. The surface bruises when handled, something not true of all earthballs. The skin is thick and smooth or cracked, but without the warts or scales some of its relatives have. It’s relatively small. Its spores—the distinctive feature by which most earthballs are defined—have narrow spines and are not reticulate[iv].

Puffballs are a large group of fungi that all have fruiting bodies of the same structure—a ball with spores inside—yet they are not closely related to each other. Earthballs, for example, are more closely related to bolettes than to the other puffballs[v]. Some puffballs are good to eat, and are often recommended to beginners as easy to identify even though they actually have some dangerously poisonous look-alikes.

Identifying edible puffballs often involves ruling out the various poisonous possibilities, of which there are several. Each must be ruled out separately.

The best way to rule out earthballs[vi] is to give the mushroom in question a gentle squeeze; edible puffballs are soft, rather like marshmallows, but earthballs resist squeezing, much like a football (squeeze too hard, and they’ll break open. A broken earthball will not resist squeezing anymore). Many writers also recommend slicing the mushroom open, saying that the inside of an earthball is never white—but actually, very young earthballs do have white interiors, it’s just that they darken much younger than the edible puffballs do.

The specific toxin involved has not been identified, but it causes vomiting, cramps, bloody diarrhea, and sometimes muscle rigidity. Symptoms can begin anywhere from ten minutes to five hours after ingestion.  Medical treatment may be available through a Poison Control Center. Assuming, that is, that S. cepa is biochemically the same as S. Bovista, for which information is more easily available[vii].

What is clear? Don’t eat this thing.

Of earthballs generally, none seem to be lethal, but sensitivity varies, so some people get mildly sickened, others are severely so. Some can get a bad reaction just from accidentally eating some spores—however, children who kick mature earthballs to make their spores go POOF (a favorite pastime of many) seem to suffer no ill effects[viii].