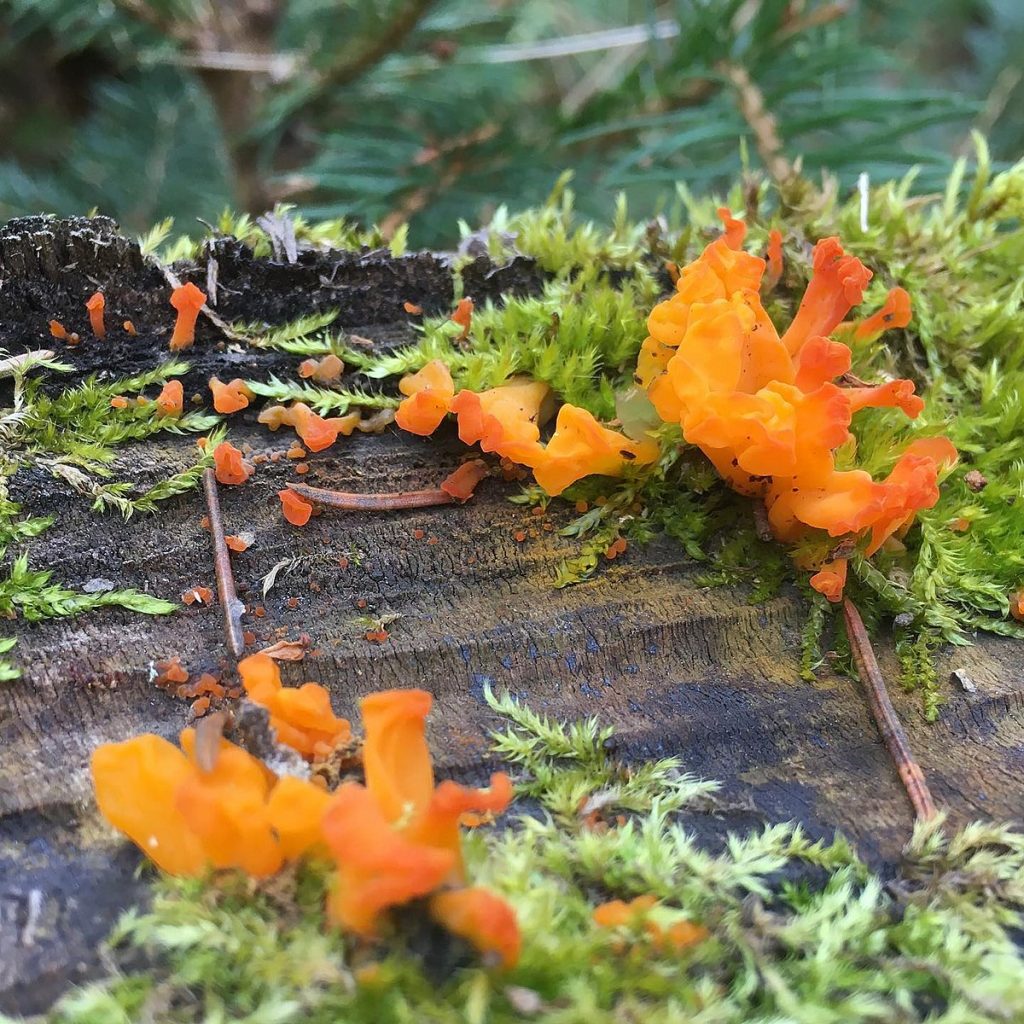 Dacrymyces palmatus or Orange jelly fungus[i] is well-named; its fruiting bodies are orange, gelatinous globules. The species has several close look-alikes with which it shares the alternate common name of “witches’ butter.” An alternate scientific name, D. Chrysospermus, adds to the potential confusion, but none of this causes any problem for casual enthusiasts because all known look-alikes are edible.

Few people eat orange jelly, as it is almost tasteless and looks very odd, but it has its enthusiasts. In folklore the species is said to be good for lung ailments, but there is little to no scientific research on the subject. Collecting and preserving specimens for study is extremely challenging. Still, there is something about a living thing that looks like a globby of jelly that fascinates.

Sporocarp: There is no distinct cap or stem, and there are no gills. Instead, the entire fruiting body is a lobed or brain-like lump of firm but gelatinous tissue. Surface and interior are both yellow to yellow-orange, though dried specimens develop a reddish color. The attachment to the substrate is narrow and distinctively white[ii].
Smell: Nothing distinctive for identification.
Taste: Nothing distinctive for identification.
Spores: Hot-dog shaped and smooth.
Spore color: Yellow.
Edibility: Edible but tasteless.
Habitat: Grows on conifer wood, fruiting from either de-barked areas or from cracks in the bark. Does not typically fruit singly.

Several close look-alikes exist, plus there are several possible points of confusion for beginners. The closest look-alikes are two species also called witches’ butter, though it isn’t closely related to either: Tremella aurentia[iii] and Tremella mesenterica[iv].  Both grow on hardwoods, not softwoods. The latter also has white, not yellow, spores and lacks the white around the attachment point.

Some people mistake orange jelly for certain types of slime mold, which are the same color but more closely resemble a liquid. There are also other jelly fungi that do not resemble orange jelly in color or shape, but could conceivably confuse a beginner by being similarly gelatinous.

Although orange jelly is sometimes claimed to be medicinal, there has been little to no research on those claims. The one benefit that has been confirmed is that the fruiting bodies are edible. What their nutritional value may be is not readily available and might not be known, although most mushrooms that are not actually toxic are healthy to eat.

Orange jelly fungus[vi] has virtually no taste, but reportedly makes the tongue tingle in a not-unpleasant way. The texture is gelatinous but firm—it has been proposed as a culinary substitute for squid meat, a food with a distinctive, enjoyable texture. Some people report good results from batter-frying the jelly or adding it to soups, strategies that take advantage of the texture while adding taste from elsewhere.

Another popular way to eat orange jelly is to simply pull some off a tree during a hike and pop it in the mouth. There is an enjoyable novelty to spontaneously eating something so otherwise un-foodlike, and everything tastes better when eaten in the woods. There are several good reasons not to do this. One is that although orange jelly has no known toxic look-alikes, it’s a bad idea for foragers to ever get sloppy about identification, and spontaneous grab-and-pop makes sloppiness very, very easy. Another issue is is that few if any mushrooms should ever be eaten raw—even if no toxins are present, humans cannot digest fungal cell walls. We need heat to melt the chitin.

All that being said, though, there are people who grab-and-pop without apparent ill effect.

Orange jelly is not known to be toxic, nor are any of its look-alikes known to be toxic. However, since very few people ever try to eat these things, it’s hard to be certain there is not an undiscovered problem lurking somewhere.