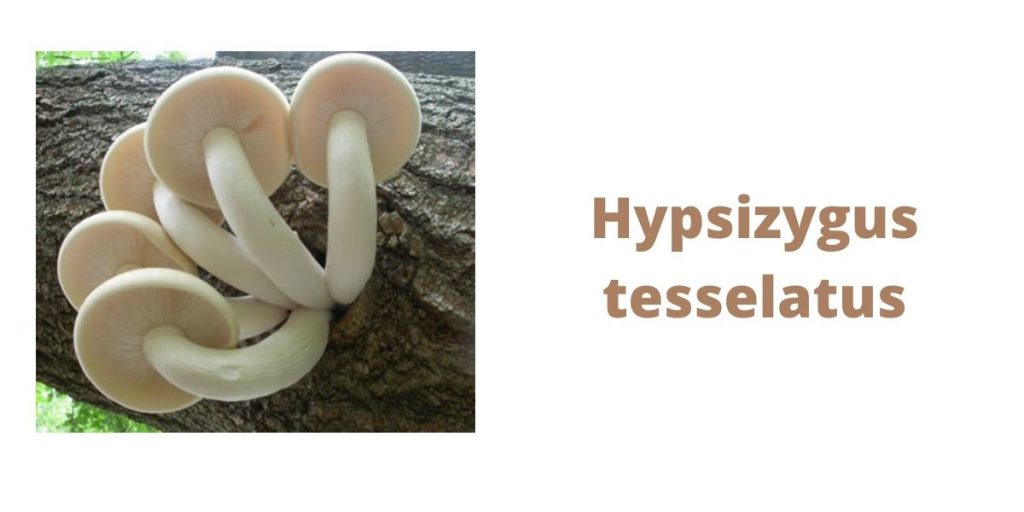 Hypsizygus tesselatus aka the beech mushroom[i], or shimeji, in Japanese, is an Asian species, though it is also cultivated in other parts of the world. It is an exotic edible mushroom, and reputed to have a wide range of medicinal uses, from treating hypertension to preventing parasites in cattle[ii]. Some of these uses are supported by preliminary research.

The name refers to this species’ fondness for beech, among other hardwoods, though it will grow on other substrates in cultivation. There are two main varieties, the white and the brown (plus hybrids between the two). They are the same species, but differ not only in the color of the cap but also in taste—white beech mushroom is milder, sweeter, and more popular overall, while brown beech mushroom has a slightly bitter, more savory flavor and is often preferred for gourmet dishes.

It’s worth noting that the Japanese name, hon shimeji, while usually referring to the white beech, Hypsizygus tesselatus, more properly refers to an unrelated mushroom, Lyophyllum shimeji.  The latter is a close look-alike of H. tesselatus, and is very well-regarded as food, but it is harder to cultivate[iii]. Among English speakers with some knowledge of scientific Latin, H. tesselatus is sometimes mixed up with its relative and look-alike, H. ulmarius—aside from any possible identification issues in the field, some writers simply use the wrong name. Some also may refer to it as H. marmoreus or H. elongatipes, but these are now-abandoned synonyms. H. tessellatus, with two “l”s, is a common misspelling[iv].

Cap: Largish, convex, smooth. Whitish to tan. The interior flesh is white and does not change color when cut.
Gills: Whitish, attached to the stem, not descending down the stem, does not bruise.
Stem: Longish, whitish to tan.
Smell: Nothing useful for identification.
Taste: Nothing useful for identification.
Spores: Roundish and smooth.
Spore color: Whitish or buff.
Edibility: Considered choice.
Habitat: Eats dead wood, often fruiting in small clusters.

This species has a close look-alike, H. ulmarius [v]. Besides microscopic details, the two can usually be told apart by growth habit; H. tesselatus prefers aspens, cottonwoods, and sugar maples, and it usually fruits in groups of two or three, whereas H. ulmarius prefers elms and ash-leafed maple, and it usually fruits singly. H. tesselatus also usually has spots on the cap in young specimens.

Beech mushrooms are delicious and very healthy to eat, when properly cooked[vi]. The flavor varies from sweet and nutty to savory and “mushroomy,” depending on the variety, and they go well with onions, shallots, or garlic. Raw, they are edible, as in they are not considered poisonous, but they are unpleasantly bitter and difficult to digest.

The mushrooms also have high levels of beta-glucan, a substance known to have certain medicinal properties.

Beech mushrooms[vii] are high in protein and fiber and low in fat. They are a good source of potassium, calcium, and phosphorus, with trace amounts of other nutrients. Drying the mushrooms does slightly diminish its nutritional value. Freeze-drying does so less, though most consumers lack the equipment to freeze-dry their own food. In taste tests, baked goods with this mushroom powdered and used to replace some of the flour (considered a possible means to add more nutrition) not only were accepted by the testers, but actually preferred over unfortified baked goods.

Most of the medicinal claims for beech mushroom appear not to have been tested in human subjects. Some may rest primarily on a combination of folk tradition and the mushroom’s chemistry, such as its high beta-glucan level. It does have potential as an antioxidant and as an antimicrobial, but again this is based on test-tube work, not clinical study[viii].

Extracts of the mushroom show signs of controlling both obesity and insulin dependence in experimental mice[ix]. Polysaccharides extracted from beech mushroom reduced biochemical and structural indicators of lung failure in experimental mice[x], although the experimental design appears not to have involved checking to see whether treated mice could still breathe after induction of lung failure. Extracts of the mushroom inhibited tumor growth, apparently in cultured cell lines[xi].

There is not enough research to established standardized dosages for beech mushroom products. When in doubt, consult a qualified expert with clinical experience using beech mushroom.

Beech mushroom is not poisonous and has no known side effects, although it’s always possible for individuals to have allergies or sensitivities to any food. It is not usually included in lists of edible mushrooms with toxic look-alikes, either, though beginners can confuse species that look quite distinct to experts. The most likely sources of confusion are the closely-related elm mushroom, H. ulmarius, the celebrated Lyophyllum shimeji, and several of the oyster mushrooms, all of which are edible. However, beech mushrooms could also be mixed up with one or more Omphalotus species[xii], which are mildly but definitely toxic. Fortunately, mushrooms of the genus Omphalotus also glow in the dark.

Ever wondered why some Mushroom Supplements are so cheap? Come find out the supplement industry's dirty secret.
Advertisements