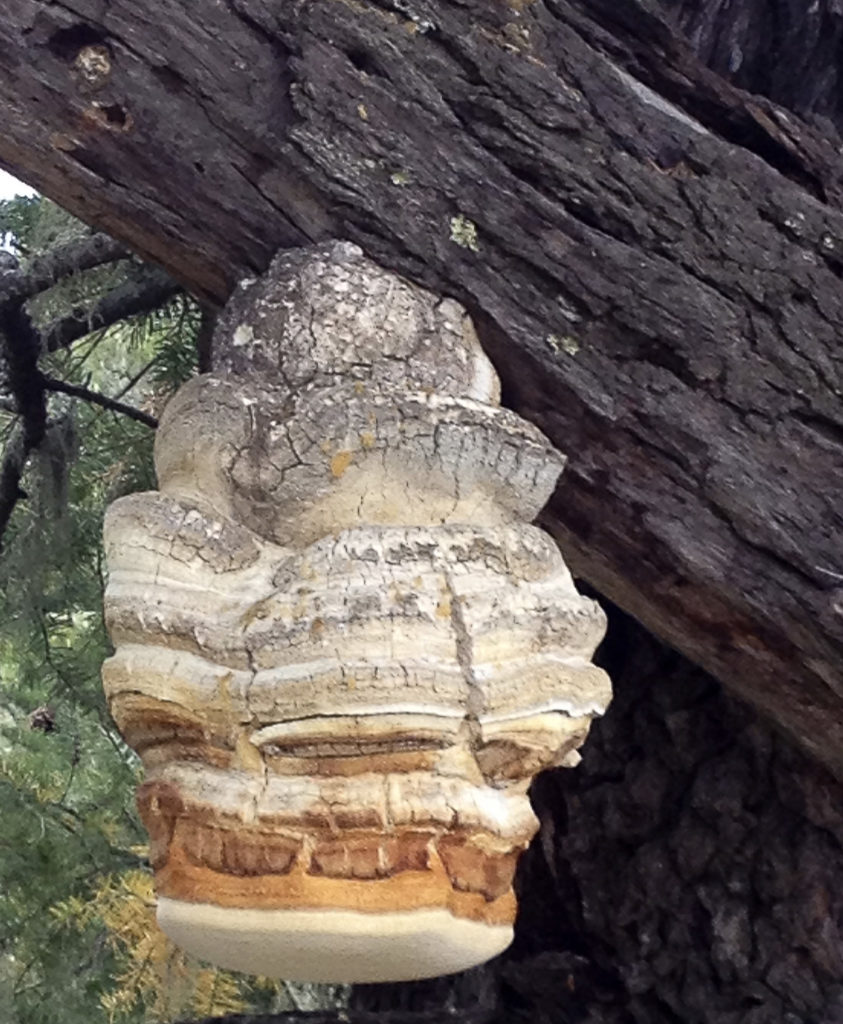 The Laricifomes officinalis is also formerly known as Fomitopsis officinalis {1.], and Fomes officinalis [2.], but is commonly known as the Agarikon mushroom. It will from now on, be referred to as Agarikon. Due to the bitter taste of the conks and very bitter taste of Agarikon, it is also called quinine conk; however, upon further investigation, Agarikon does not produce quinine; it is just bitter. Other names include Gharikon or Agharikon where, in Iran, it has been long used for medicinal purposes [3.]. Not only in Iran but worldwide Agarikon has been in use for thousands of years due to its healing potential and was originally described by Dioscorides Pedanios, a Greek physician/pharmacologist in the 1st century AD. . He recommended Agarikon as a treatment against consumption illnesses such as pulmonary tuberculosis. . The fruiting bodies of Agarikon have also been carved to make masks used by Native Indians used during rituals, indicating the size of this mushroom.

The Agarikon can become very large and columnar shaped (over 50cm long). It is becoming more difficult to source Agarikon as its preference is to grow in old-growth forests, and this is becoming increasingly rare. In particular, it likes to grow in the Pacific Northwest, which has seen a tremendous amount of logging. The Agarikon may also be at risk due to climate change; there is reportedly a significant decline in these mushrooms.

Where it can be found is widely distributed in the Northern hemisphere – North America, Asia, Europe and Morocco. The fungus can appear anywhere from the base of the host tree to over 20metres above but is rarely found on thicker branches. Agarikon likes a temperate climate although, some suggest it likes wetlands.

Agarikon is a polyphore, a group of fungi that produce fruiting bodies characterised by the presence of hymenium – a surface containing a large density of spore-bearing structures.  Although ecologically Agarikon is categorised from pathogen to saprotroph, usually they are completely dependent on wood as a substrate. It will continue to live as a saprotroph, even after the host tree dies causing brown rot.

Quite spectacularly, this mushroom can grow for about 75 years, and some say even 100 years, in this regard it has managed to build up exceptional defences to invading pathogens such as bacteria and viruses. Mycologist’s, have much revered the Agarikon mushroom and its anti-viral therapeutic properties, and in particular anti-bacterial activity.

Fruiting bodies: Agarikon can grow very large and hangs like fruit from positions on a tree where branches connect to the trunks of old and tall trees. It is soft and of a chalky consistency. Shaped like a beehive with chunky white flesh.
Smell: Chalky.
Taste: Very bitter like quinine.
Spores: Emitted from the underside of the mushroom
Spore color: Whitish.
Edibility: Edible, not to be consumed in large quantities. Often taken as a powder in capsules.
Habitat: The mushroom is a wood-rotting fungus, it grows on a number of hosts including conifers – Hemlock, Spruce trees and Larch tree, and Douglas fir tree.

There are no reported look a likes of Agarikon, and it appears to be quite distinguishable, largely due to its size and shape.

It is increasingly clear that humans are increasingly finding metabolites from natural sources that are a boost to our immune system. The fruiting bodies of Agarikon are used for medicinal purposes in North America, Western Europe, and Asia, including Mongolia. It has been used in the treatment of inflammatory conditions such as asthma and rheumatoid arthritis; lung conditions including cough, pneumonia and tuberculosis (Reviewed by [2.]). The Agarikon has long been known especially for its benefits on the pulmonary system. Of interest are chlorinated coumarins isolated from the mushroom, and these have been shown to have pharmacological properties, including anti-viral, anti-bacterial, anti-fungal, anti-parasitic and anti-helmintic (Reviewed by [1.]).

According to the scientific literature, there is evidence of a wide range of anti-bacterial and anti-viral properties demonstrated by Fomitopsis officinalis, including but not exclusively, pathogens like Mycobacterium tuberculosis, Yersinia pseudotuberculosis and Staphylococcus aureus, in addition to Ortopox virus [1.]. This provides evidence of particularly potent antimicrobial properties with special consideration to tuberculosis, a lung disease that can have devastating consequences with high mortality rates and has been around for 9000 years [4.]. Ethanol extraction of coumarins from the Agarikon mushroom was able to demonstrate in vitro anti-tuberculosis activity. The extracts had protective properties against Mycobacterium tuberculosis, responsible for the diseased condition; of importance was that these results were compared against drug-resistant cultures of the bacteria [5.]. Thus, indicating potent immunological properties when considering other known drugs did not have the same effect.

Anti-viral properties of Agarikon against smallpox has been described [6. ], and he reported that an extract concentration of 1-2% reduced the impact of cellular damage by virus particles by 50%. In contrast, diluted crude extract of the mushroom (1:106) provided better anti-viral efficacy against herpes, influenza A, and influenza B [7.]

and other viruses. Naturally, however, there is variability in the type of virus that Agarikon can stave off. This is not surprising given the number of species available and may vary from Agarikon to Agarikon furthermore, and it is thought the older the fungus, the more potential for demonstration anti-viral properties. In support of the anti-viral properties, aqueous extracts of the mycelium of Agarikon mushroom and ten other basidial fungi species from the Altai Mountains in Russia were protective against type A influenza of birds (HN1) and humans (H3N2) [8.].

There are suggestions that Agarikon could have potential anti-tumorigenic properties [9.]; however, there is scant scientific evidence in support of this. With further research, it would not be surprising if Agarikon did have anti-cancer potential given that other mushrooms have been shown to have anti-proliferative effects on cancer cells.

There is not a reported dosage for Agarikon however, always err on the side of caution to ensure tolerance of any new food.

Large doses of Agarikon may cause gastrointestinal discomfort and diarrhea. It is not advisable to consume if pregnant or breastfeeding. Due to the possibility of liver damage, it would be prudent to take professional medical advice before using Agarikon during cancer treatment or as a therapeutic agent. Always take medical advice before seeking to self-medicate; this is essential to ensure that there are no contraindications.