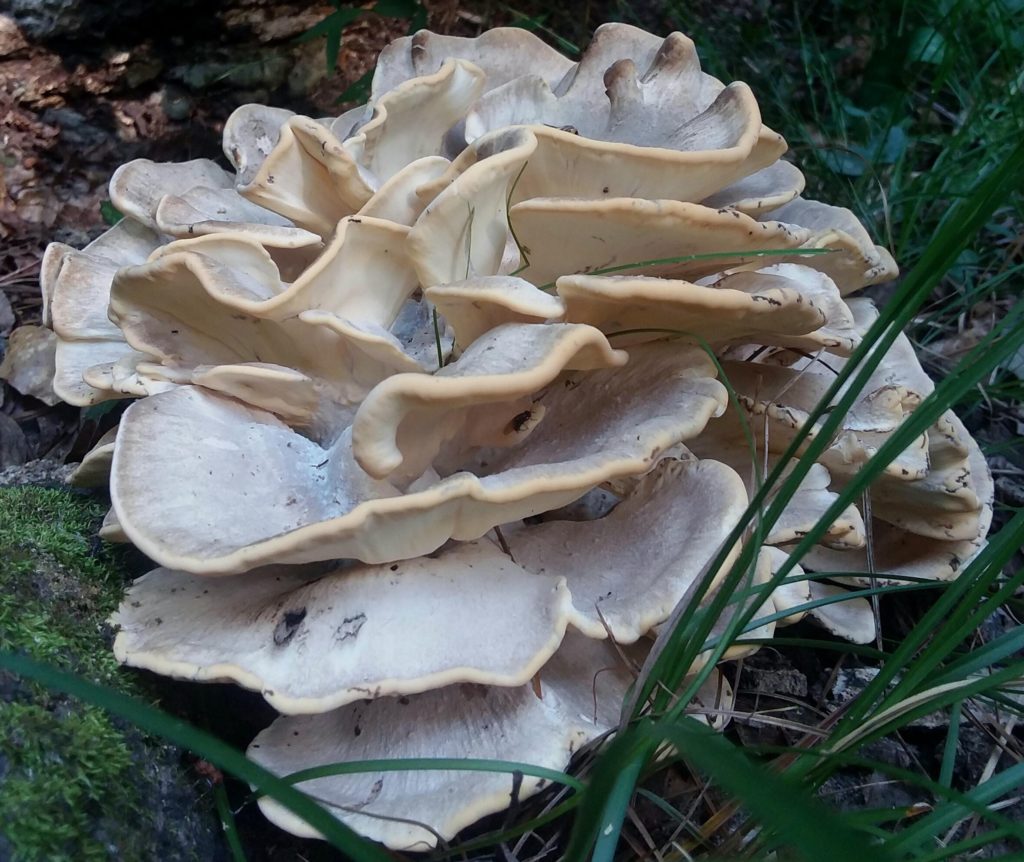 Meripilus sumstinei[i] is a large, multi-capped polypore that is interesting largely because it tends to be mixed up with other species. M. sumstinei is edible[ii], but few people enjoy it. If it has medicinal value, that value is yet to be researched or described. But the species is a close look-alike for Grifola frondosa (maitake or hen-of-the-woods), a choice edible famed for its medicinal value. Several other species, most of them also edible, also resemble this species to greater or lesser degrees. The problem is not so much one of accidental poisoning through misidentification (although foragers should use caution; dangerous mistakes are always possible) as the risk of wasted time and effort—and the risk of a mushroom removed from its environment for nothing.

Perhaps in keeping with the potential for ID confusion, M. sumstinei is also the center of a mixed-up knot of names. Part of the problem is that the species, which has an exclusively North American distribution, has a close relative in Europe, M. giganteus, and many authorities mistakenly apply the giganteus name to both. Some of the same common names, such as “black-staining polypore,” also apply to both.

Also, M. sumstinei’s look-alike, hen-of-the-woods, is often confused with chicken-of-the-woods solely on the basis of their names—the two do not closely resemble each other. Apparently as a joke, “rooster-of-the-woods” has been proposed as a common name for M. sumstinei, creating a whole flock of fungal poultry for mycophile tongues to trip over. The name seems to be catching on, as it appears on several websites.

Cap: Each cap is medium-sized, fan-shaped, whitish when young and turning brown with age—bruising black when touched. The interior flesh is white and slightly stringy. Multiple caps grow in an irregular rosette from the same branched stem.
Gills: No gills—the spores are released from pores. Because the pores are very small, the pore surface looks very smooth. It is white to tan, and bruises brown or black when touched.
Stem: Tough, short, often off-center, white at first and darkening to brown with age.
Smell: Mildly pleasant
Taste: Mild to slightly acidic.
Spores: Smooth, elliptical to round
Spore color: White
Edibility: Edible, but not popular
Habitat: Eats living or dead wood, mostly oaks and other hardwoods, though it has been reported on Douglas-fir. The fungus fruits from the base of its tree in the summer and fall.

Differentiating M. sumstinei from its several look-alikes in North America is not actually difficult, since it is the only one that bruises black when handled. The black bruising also adds to the perceived unpalatablility of the species; few people like to eat black food.

The main look-alikes of M. sumstinei are Grifola frondosa (maitake, or hen-of-the woods), Bonarzewia berkeleyi (Berkeley’s polypore), and Sparassis spatulata (cauliflower mushroom)[iii]. None are toxic, and of the group, M. sumstinei is the only one that bruises black. There are other differences.

Dosage is not an issue, since this species is not used in medicine.