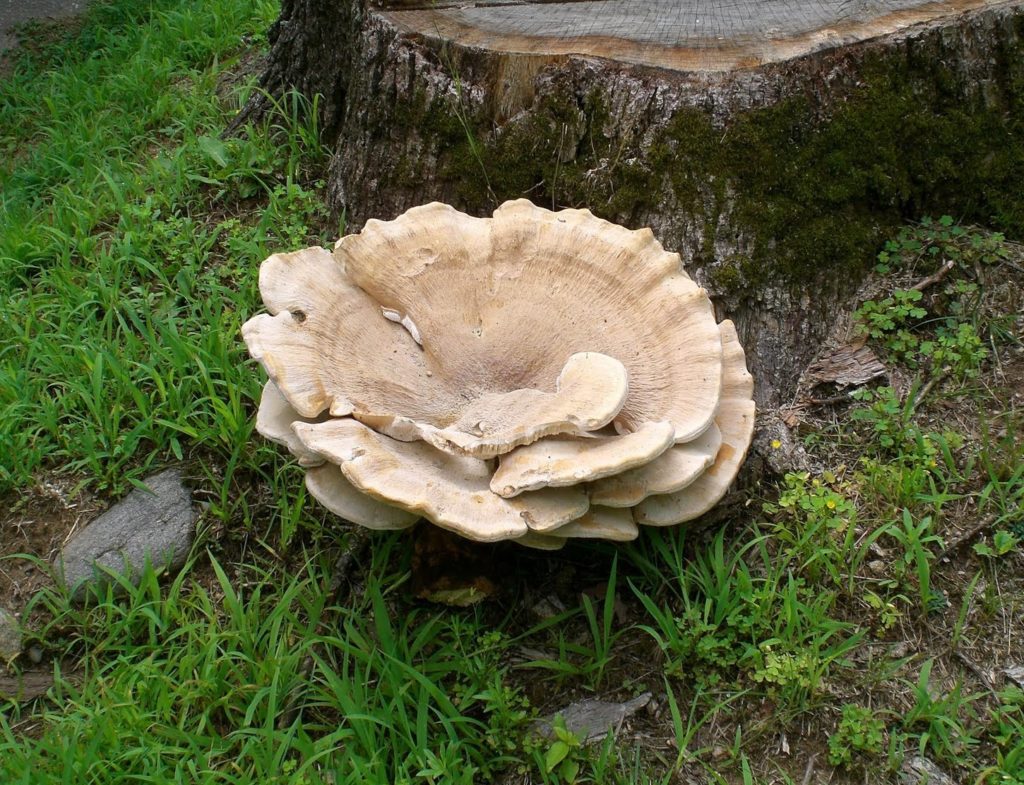 Bondarzewia berkeleyi is a polypore in shape—it has shelf-like fruiting bodies with spores produced inside a layer of tubes ending in pores—but it is not closely related to other polypores. In fact, it is genetically most similar to russellas and lactarias. Its paradoxical nature is also exemplified by the fact that it is edible yet often too tough to chew, and may have medicinal value but has not been well researched and so nobody really knows its potential. Bondarzewia Berkeleyi is commonly referred to as the Berkeley’s Polypore, and sometimes called stump blossoms. These names will be used interchangeable throughout this article.

Cap: Very large. Several kidney-shaped or irregular caps emerge from a single stem and form a rosette that may be over two feet across when mature. The upper surface is white, whitish, or tan and does not bruise. The interior flesh is white, thick, and does not bruise.
Gills: No gills; the spores are released from inside pores on the underside of the caps. The pores can be large, especially near the base. The pore surface runs partway down the stem and is whitish, either not bruising or only bruising faintly brownish.
Stem: Short, gnarled, yellowish to pale brown.
Spores: Round with ridges and spines
Spore color: White
Edibility: Edible, but grows tough with age
Habitat: Eats live and dead wood from oaks and other hardwood species. Fruits at the bases of trees in the summer and fall.

Berkeley’s Polypore[ii] causes a distinctive type of rot in which the wood of the butt of the tree first becomes white and stringy and then breaks down altogether leaving the butt hollow. In oaks, the medulary rays (lines of rot-resistant tissue distinctive of oaks that stretch across the annual rings from the center towards the outer edge of the tree) persist even as the rest of the wood turns to white string, so the decay is called “string and ray rot.” And yet despite living mostly on tree bases, the fungus can fruit from the ground far from any tree, if there are roots or the remnants of an old stump beneath.

When the fruiting body starts to emerge, it resembles a giant hand with short, fat fingers. Then, the tips of the “fingers” expand into huge, flat, fan-like shapes that together form an irregular rosette. The species is at its most edible when the caps are newly expanded; with age, the fruiting body becomes increasingly tough and unpalatable.

Some other polypores, especially the black-staining polypore (Meripilus sumstinei), and the cauliflower mushroom (Sparassis spathulata), also are sometimes confused with B. berkeleyi[iv]. In both cases, the species can be differentiated by an experienced forager fairly easily, but only if the forager knows to look out for potential confusion. Fortunately, both are edible.

It should not be assumed that a dangerous mistake is impossible, however.

While B. berkeleyi[v] has not been formally assessed, it seems prudent not to eat it raw. Not only are many mushrooms undigestable, but, like some closely-related russellas, some individuals of this species are spicy when raw but not when cooked—and those russellas are toxic when raw. It seems likely that the spicy principle in both cases is a toxin that breaks down when heated.

[i] Frank, J.L. (n.d.). What’s in a Name? Bondarzewia mesenterica in Culture, the Market, and the Wild. North American Mycological Association