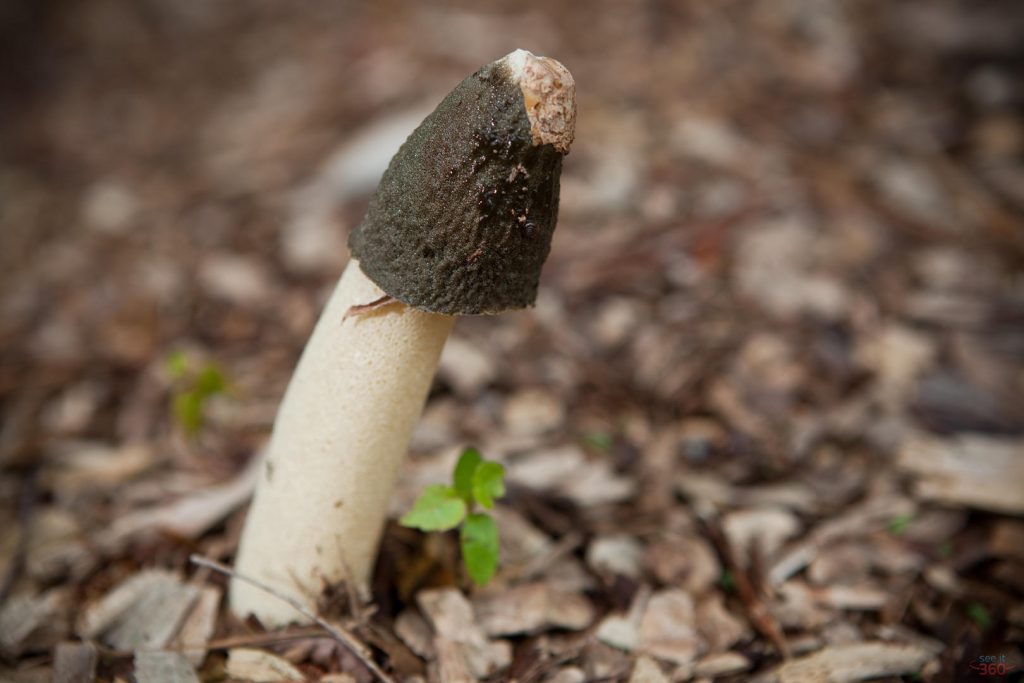 Phallus ravenelii, more commonly known as Ravenel’s Stinkhorn or the Eastern Stinkhorn, is a rather peculiar fungus that grows in eastern North America. Its distinctive phallic shape, olive-colored and green slime-covered cap, and emanating fetid odor that is said to resemble the smell of putrid/rotting flesh or feces makes this species very easily distinguishable on the forest floor. [i]

From a historical and etymological perspective, P. ravenelii is named in honor of the American botanist Henry William Ravenel who first documented this species in 1846. However, stinkhorns have been widely known for centuries, even as early as 1 AD the Roman author Pliny the Elder wrote about them.

Cap: The cap is narrowly bell-shaped, and measures 3-5cm by 2.5-4cm. The apex of the cap contains a mouth-like opening that is continuous with a hollow stalk. The outside surface of the cap is covered with a fetid-smelling, slimy, olive-tinged spore mass. Underneath this spore mass, however, the cap is smooth or granular, somewhat wrinkled, and white.

Stalk: The stalk is cylindric, white to pale yellow, and measures 10 to 15 cm high and 1.5-3cm thick. . It tapers upwards from a tough, membranous, cup-like volva. The basal volva is smooth, wrinkled on the outside, and white, pinkish, or lilac-tinged on the inside. It also has a thick, colorless, gelatinous inner layer.

Spores: The spores are embedded in the fetid, olive-tinged slime that coats the cap. They are elliptical, smooth, colorless, and measure 3-4.5 by 1-2µm.

Smell: Although this species is notable for its distinctive strong odor, it does not always have an odor. In their immature form, when they first emerge from their membranous volva, and when their spore slime layer is lost in age, stinkhorns have no odor. Thus, it is important to avoid being deceived by widespread statements in mushroom guides and mycological literature suggesting that one always encounters the fetid smell when tracking stinkhorns.

What’s with the smell? The smell serves a rather important function. The smell of rotting flesh or feces attracts flies to the cap of Phallus ravenelii. As the flies land on the slimy cap, the spores stick to their legs and are then distributed by the insects wherever they go. [iv]

Edibility: Certain mycological literature suggests that the immature fruiting “egg” is edible, and certain text even goes as far as to say that it is considered a “good edible mushroom”. However, consumption of these mushrooms is not recommended as these egg-shaped masses closely resemble deadly Amanita.

Habitat: Phallus ravenelii is a saprobic (mushroom which feeds on dead or decaying organic matter ) mushroom that can be found growing solitarily or in clusters in almost all environments. Most frequently they can be found growing on wood chips, sawdust piles, rotting tree logs or stumps, meadows, cultivated land, and even in urban gardens and lawns.

Fruiting Season: This mushroom fruits from August to October.

Phallus ravenelii may be confused for its other stinkhorn relatives.

Additionally, the Net Stinkhorn (Phallus duplicatus) has a very well-developed and prominent skirt that projects below the cap. Although the Eastern Stinkhorn may have a similar skirt, it is never as well developed or conspicuous.

Another species that may be confused for Ravenel’s Stinkhorn is Itajahya galericulata. Fortunately, this species has a globose cap composed of several overlapping layers, with spore lime sandwiched between the layers. This contrasts with the conical cap of Eastern Stinkhorn which contains its spore slime on the external surface.

A word of caution regarding the consumption of Ravenel’s Stinkhorn. If one does choose to eat the immature fruiting egg-shaped mass of this species, you must be indubitably sure that this egg-shaped mass is indeed Phallus ravenelii. As mentioned, the Destroying Angels (Amanita virosa or Amanita Bisporigera) also has a similar puffball-shaped immature form which can easily be confused with the egg-shaped immature form of Phallus ravenelii; this mistake could cost you your life!