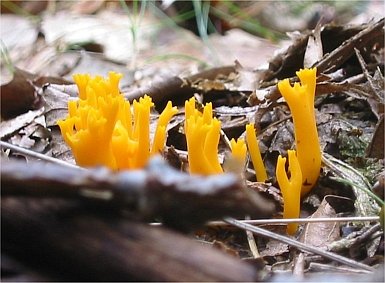 Seen in late summer and early fall during wet seasons.

This species is similar in appearance to several of the other Ramaria, and usually examination of microscopic characteristics is required for absolute identification. See Petersens’ paper (1974) for a detailed description of microscopic features.

Polysaccharides extracted from the mycelial culture of R. aurea and administered intraperitoneally into white mice at a dosage of 300 mg/kg inhibited the growth of Sarcoma 180 and Ehrlich solid cancers by 60% (Ohtsuka et al., 1973).

The Truth About Medicinal Mushrooms

Medicinal Mushrooms are great. One of the few supplements I feel confident taking that actually has benefits. Most of the supplement industry is selling you on placebo, but I don't feel that's the case with medicinal mushrooms. HOWEVER; a large portion of the Mushroom Industry is corrupt. ​Come read this article if you want to find out the Dirty Secret in the Mushroom Industry and how to choose an Authentic Mushroom Supplement.

George Barron’s fungi website has a page on the golden coral.

Burt EA.
The North American species of Clavaria with illustrations of the type specimens.
Annals of the Missouri Botanical Garden. 1922 9(1):1-78.

Scroll back to top

Mushroom Field Guides cost upwards of $50. We're giving you a one time offer to get one free of charge. All you have to do is sign up with your email.

Not only will get you a free field guide but you will get exclusive access to ground breaking studies, and discounts.