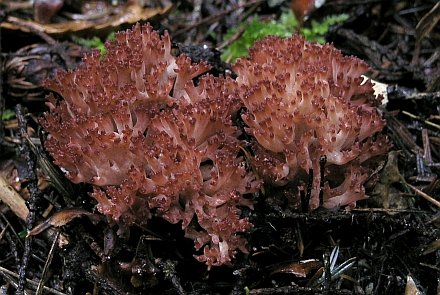 Adhikari et al. (2005) report that in Kathmandu, this species is used medicinally to relieve muscle pain.

A number of compounds have been isolated and identified from the fruiting bodies of Ramaria botrytis (Yaoita et al., 2007):

Ramaria botrytis was found to produce the unusual amino acid nicotianamine, an inhibitor of angiotensin I-converting enzyme (Izawa and Aoyagi, 2006).

Polysaccharides extracted from the mycelial culture of R. botrytis and administered intraperitoneally into white mice at a dosage of 300 mg/kg inhibited the growth of Sarcoma 180 and Ehrlich solid cancers by 60% (Ohtsuka et al., 1973).

Mycoweb, Mushroom Expert have additional information. This website about the fungi of Thrace, Greece has an impressive photo gallery, as does the Swedish Stridvall site.

Burt EA.
The North American species of Clavaria with illustrations of the type specimens
Annals of the Missouri Botanical Garden. 1922 9(1):1-78.