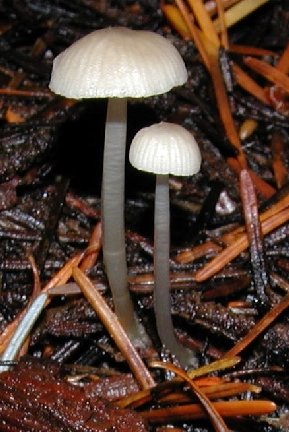 This species is recognizable by the thick, clear mucus covering the stem, from which it derives the epithet roridus (from the Latin roridus = bedewed). I would be interested in knowing the biochemical composition of this slime layer… perhaps it’s a secreted source of anti-tumor β-glucans? Some carbohydrate analysis might do the trick.

R. roridus is reported to be bioluminescent, and one of several species (see others here) responsible for “foxfire”, the phosphorescent glow sometimes given off by these fungi when composing dead wood.

The culture characteristics of both this species and various Mycena species have been reported (Treu and Agerer, 1990). In this particular study, the dripping bonnet, grown on malt agar, was not bioluminescent, suggesting it might require some specific nutrient that is in its normal diet of decaying wood, but absent in the malt agar.

Polysaccharides extracted from the mycelial culture of R. roridus and administered intraperitoneally into white mice at a dosage of 300 mg/kg inhibited the growth of Sarcoma 180 and Ehrlich solid cancers by 100% and 90%, respectively (Ohtsuka et al., 1973).