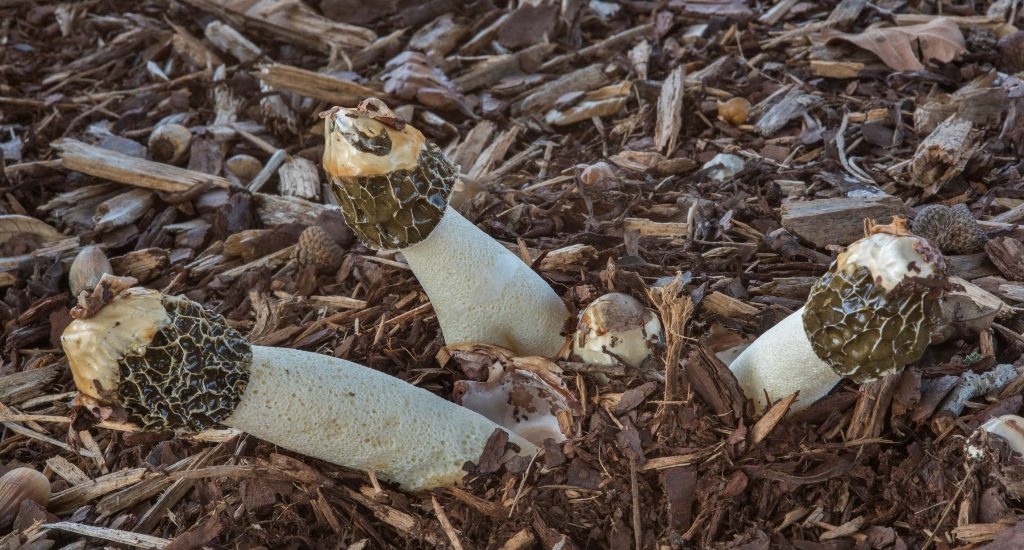 There are mushrooms with names that sound anatomical by coincidence; Phallus hadriani is not one of them. It and its close relatives came by the name, Phallus, because their mature form looks like a penis, and it doesn’t look much like anything else. This article will discuss that fact without winks and nudges and innuendo, so please get your giggles out of the way now, so we can go back to talking about mushrooms.

The common name, stinkhorn, refers to the deeply unpleasant scent that these fungi use to attract flies—flies, rather than wind, spread the spores. Most people, if they know about stinkhorns at all, know them as the stinky, penis-looking things that emerge, suddenly and to humans’ great embarrassment, from otherwise respectable gardens and lawns. And yet there is a great deal more to learn about the group.

Stinkhorns are edible, especially in their early “egg” stage, and have a long history in folk medicine. While the traditional uses almost certainly don’t work, some research suggests there could be medicinal applications that do.

Why do the traditional uses probably not work? It’s not because there’s no evidence, for a lack of evidence for a thing is not the same as evidence against it. No, the problem is the traditional uses were based on the now long-discredited “doctrine of signatures,” which held that the outward appearance of a plant or fungus is a sign of its usefulness to humans. A plant with liver-shaped leaves must be useful for treating the liver, for example. And a fungus with a penis-shaped fruiting body must be useful for treating erectile dysfunction. No, such “signatures” do not exist, and the chance of a mushroom coincidentally being able to treat disorders of the human organ it happens to resemble is essentially zero.

Cap: At maturity, small to medium-sized, thimble-shaped, with a honeycomb-like surface of pits and ridges. The surface is seldom visible, however, because except in very old specimens the cap is smoothly coated by a layer of an olive-brown substance called gleba.
Gills: There are no gills. The spores are produced on the outside of the cap and are contained within the gleba.
Stem: Very long and thin, but only slightly thinner than the cap. Whitish in color and hollow. At the base of the stem, and often partially buried, is a cup of purplish, pinkish, or brownish tissue called the volva.
Smell: Distinctively foul to human sensibilities, but very attractive to flies. Although the scent is often very powerful, it is not always so. Some individuals are close to scentless.
Taste: Not distinctive for identification purposes.
Spores: Smooth, oblong.
Spore color: The spores are thoroughly mixed with the dark, slime-like gleba and their own color can’t be observed.
Edibility: Edible, but not always enjoyed.
Habitat: Eats decaying plant matter in the ground, often in open areas, including parks and gardens. Fruits singly or in groups.

The closest look-alike of P. hadriani, the dune stinhorn, is its relative, P. impudicus, the common stinkhorn. The two differ only in that the volva of the latter remains white. Though both have an almost world-wide distribution, their ranges are not identical, so there are some places that have the one species but not the other[ii].

There are also other stinkhorns in the closely-related Mutinus genus that have a similar overall look but lack a distinct cap; instead, the gleba is produced by the tip of the spike-shaped fruiting body.

A Phallus stinkhorn that has had its gleba removed by flies (and does not have a strong odor) can closely resemble a verpa mushroom, or even some of the longer-stemmed morels. Such a mistake could be dangerous, since while stinkhorns are edible, some verpas are toxic. Fortunately, in almost all cases some gleba remains and is visible on close inspection.

Stinkhorn eggs can be mistaken for puffballs, earthballs (another potentially toxic mistake), or the egg-stage of Amanitas (a potentially deadly mistake). In all of these cases, slicing the egg vertically will reveal its true identity—the shape of the embryonic cap and the dark layer of gleba between the cap and the veil will be visible. Earthballs and puffballs, in contrast, have no internal structure, only the developing spore mass, while Amanitas have an embryonic cap and stem but no dark gleba layer.

Stinkhorn eggs of various species are popular edibles in Europe and Asia, but Americans tend not to like them[iv].

The bamboo mushroom (P. indusiatus) has about 6 g. of protein in a 28 g. serving, is a good source of vitamin C and iron, and it’s low in fat[v].

The common stinkhorn (P. impudicus) contains substances known to have anti-tumor properties[vi] and appears able to reduce the risk of thrombosis in cancer patients[vii], according to preliminary research. The species also shows promise in wound healing and the treatment of diabetes in experimental animals[viii]. Note that these studies involve extracts. Whether eating the whole mushroom could have a medicinal effect is not clear. Even the benefits of the extracts are by no means confirmed yet.

It’s not clear whether the dune stinkhorn has similar nutritional and medicinal benefits, but it may.

There is no official dosing guidance. Those who want to use this species medicinally should seek the advice of qualified medical practitioners with clinical experience using P. hadriani.

There are no known toxic stinkhorns, but it’s always possible for individual eaters to have allergies or sensitivities to any food. It’s also important to note that there is relatively little known about P. hadriani, and while other stinkhorn species can suggest what the biochemistry of P. hadriani might be, these are still only guesses. We don’t know what side effects medicinal use might have. This might not be a medicinal species at all. We don’t know.