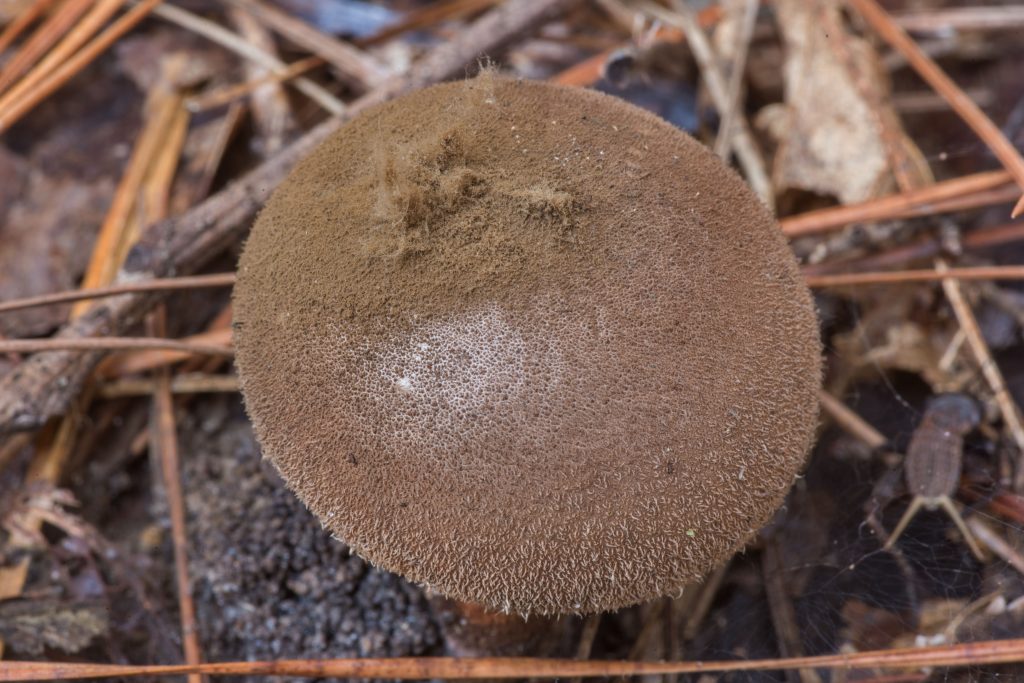 The umber brown puffball, L. umbrinum[i], is a medium-sized puffball shaped like an upside-down pear and with a very wide distribution. It is probably edible (when young, before the spore mass begins to mature), since many similar puffball species are, however the safety of this particular species as food isn’t known. Some puffballs, possibly including this one, are used medicinally, though the effectiveness of that usage has not been well-researched[ii].

Fruiting body: As a puffball, the fruiting body of this species consists of an enclosed ball within which spores are produced. Medium-size. At maturity, the spores emerge from an opening at the top of the fruiting body. The outer skin is thin, papery, and covered with minute spines. Young specimens may be pale brownish, but they darken with age becoming medium to dark brown, or even blackish. The interior is initially white, darkening to a brown mass of dusty spores.
Stem: Short but distinct, giving the whole fruiting body a pear-like shape. The interior of the stem does not include any spores. Its flesh is whitish to brownish. There are white rhizomorphs at the base.
Spores: Round, either smooth or subtly spiny.
Spore color: Brown.
Edibility: Unknown.
Habitat: Eats woody debris under conifers. Fruits singly or in groups.

L. umbrinum[iii] is often confused with another species, L. molle, even in literature written by mycologists. The two can be told apart only by fine the details of the surface texture and the spores.

L. umbrinum has several very close look-alikes, including L. molle, L., nigrescens, and L. perlatum, all of which can be differentiated through details of surface texture and the microscopic details of the spores. Also, not all of these species share the whole range of L. umbrinum[iv], so where a specimen is found is another clue as to its identity.

Puffballs in general can also be easily confused with Earthballs and with the “egg” stage of both stinkhorns and amanitas. They can best be differentiated from the “eggs” when sliced in half vertically, since puffballs have none of the internal structure that “eggs” do. Puffballs are soft, like marshmallows, and thin-skinned, whereas earthballs are firm and thick-skinned[v].

These potential confusions matter because while L. umbrinum is part of the generally-edible puffball group, earthballs are poisonous. As for amanitas, some are deadly.

L. umbrinum has no known uses, though since no puffballs are definitely known to be toxic, this one is almost certainly edible, too. Some people use puffballs, possibly including this species, medicinally, but there is no research yet as to whether such uses work[vi].

This species has no known medicinal uses, so there is no dosage.

The edibility of L. umbrinum has not been formally assessed, making eating it risky—although puffballs are edible generally. Medicinal use carries the risk of ineffectiveness, but even if the species is medicinal, whether its medicinal use might carry side effects is unknown. But the most serious risk that someone attempting to eat this species faces is that of miss-identification—it could be mixed up with either a toxic earthball or a deadly Amanita. Anyone wishing to find out whether L. umbrinum is edible must be careful to properly identify the species.