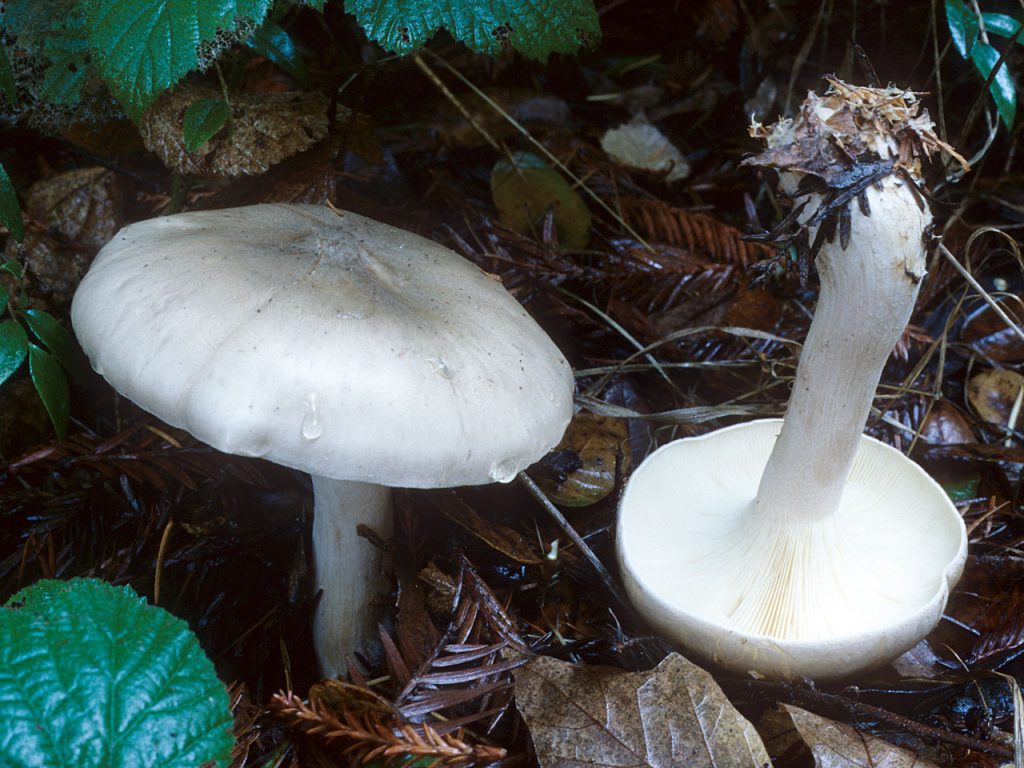 Let’s just get this out of the way: the name of the genus, Clitocybe, is not a reference to human anatomy, though there may be an indirect etymological link. The genus name means “sloping head” in Latin[i]. The species epithet, nebularis, means “misty,” possibly a reference to the light gray color of the mushroom.

The same species has also gone by Agaricus nebularis or Lepista nebularis in the past. Some people continue to refer to it as the clouded agaric. It’s widespread across Europe and North America, and often  fruits in large, dramatic fairy rings—though rings are hardly unique to this species, or even to mushrooms. There are many organisms, including certain plants and lichens, that grow outward while dying back in the middle, forming gradually expanding rings. But when fungi growing underground form rings, their presence may go completely overlooked by humans until the fungus fruits, and the sudden appearance of the organized, almost artificial-looking shape can be disconcerting. The phrase, “fairy ring,” refers to the legend that mushroom rings are created by the dancing of fairies. Bad things supposedly happen to mortals who intrude upon the dance, even accidentally.

Cloud funnel is one of those mushrooms with a decidedly mixed relationship to humanity. It has some medicinal potential, though that hasn’t been well explored yet, and some people report that it’s delicious. Other people eat it and get sick. Opinion even differs radically on its scent. Reportedly, it’s not the mushroom that’s varying—some people are simply biologically pro-cloud-funnel people and others anti-cloud-funnel people[ii]. Go figure.

Cap: Medium-sized to large, convex to flat with a slight depression in the center, may be irregular in shape. The surface may be wet or dry, smooth or slightly hairy, and is pale gray to pale brownish-gray in color. The interior flesh is white and thick.
Gills: Cream-colored, close, attached to the stem or running partway down it.
Stem: White or whitish, sometimes with brownish fibers. The base is often enlarged and has white mycelium on the bottom.
Smell: Strong and distinctive—pleasant to some people, unpleasant to others.
Taste: Mealy, “fungal,” or sweetish.
Spores: Elliptical, smooth.
Spore color: Pale yellow.
Edibility: Variable.
Habitat: Eats dead, buried plant matter, often under conifers or in woodchips used for landscaping. Can fruit singly, or in loose, scattered groups, or in dense, often ring-shaped crowds. The rings can become very large.

There is some debate over whether certain variations are subspecies of cloud funnel or a separate species[iii]. Known look-alike species include the wood blewit (Lepista nuda), which has lilac gills, and Entoloma sinuatum, which has yellowish gills and pink spores[iv].

Curiously, a second mushroom will sometimes grow out of the cap of the cloud funnel. This second mushroom is the piggyback rosegill (Volvariella surrecta)[v], a rare, parasitic species. It is white, with a distinct volva and pink spores. Neither it nor the decaying cloud funnel it roosts in should be collected, as there aren’t enough to spare.

Most people can eat cloud funnel with no trouble, though a large minority cannot. Even stranger, descriptions of both the taste and the scent vary from very positive to very negative, apparently because of variations among humans, not variations among the mushroom[vi]. There is some precedent; cilantro famously tastes like soap to people with a specific genetic difference.

For those who can eat cloud funnel safely and do like it, its most obvious benefit is excellent taste. Nutritional information is not readily available, though most edible mushrooms are healthy. The species is not a traditional medicinal, but chemical studies of the mushroom have found a number of substances known to have medicinal potential. Preliminary research on the species suggests the following benefits[vii]:

It’s worth pointing out that a mushroom’s status as a source of medicinal substances does not always indicate that eating the mushroom is also medicinal. Sometimes the dose available is just too low except in a concentrated extract. In any case, this species has not been extensively tested in humans yet.

This species is not yet being used medicinally. There is no established dosage guidance.

People who react badly to cloud funnel experience gastrointestinal upset; it’s seldom, if ever, serious, although several closely-related species do cause much more severe illness[viii]. It’s also possible for a person to have a hypersensitivity or an allergy to any food.

There does not seem to be any way to lessen the toxicity of cloud funnel, nor is there any proven way to predict whether someone will react to the toxin. Increasingly, the species is simply considered dangerous and avoided. There are anecdotal reports that people who dislike the scent seem more likely to react badly to the toxin[ix]. Perhaps those people who don’t find cloud funnel appetizing should take the hint and not try to eat it.

One close look-alike, livid pinkgill (Entoloma sinuatum), is poisonous, capable of causing severe, prolonged, gastrointestinal illness and, in one documented case, death[x]. A spore print is the best way to differentiate the two.

Although the more dangerously toxic Clitocybe species are not typically listed as look-alikes for cloud funnel, it’s hard to understand why they aren’t; they look very similar and have caused documented fatalities[xi]. In general, white or whitish mushrooms deserve close scrutiny, as some dangerous mistakes are possible.