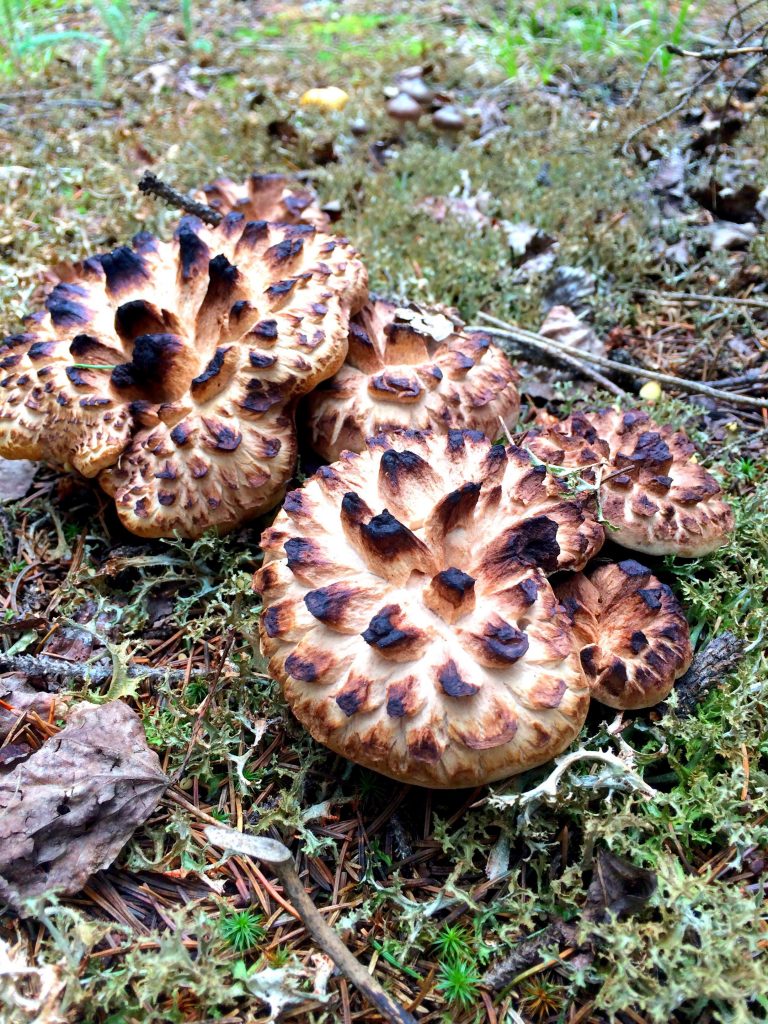 Sarcodon imbricatus[i] is part of a large group[ii] of mostly not closely-related species all called hedgehogs because they release the spores from spines (usually called “teeth,” but they are more spine-like than tooth-like) rather than from gills or pores. This one is the scaly hedgehog because of the rough scaly texture of the cap surface. But “hawk wing” is an alternative common name less likely to cause confusion.

The hawk wing mushroom is one of the few in its genus that is edible[iii]. Most Sarcodon species are too bitter, and even this one can be unpleasantly bitter, especially in older specimens—accounts of its palatability vary dramatically[iv]. It is impressively large, though, and there is research suggesting some unusual medicinal uses.

Cap: Medium-size to large (sometimes very large), convex but with a central depression, brownish to dark brown with blackish scales. The interior flesh is soft and whitish to slightly brownish.
Gills: No gills. Instead, the underside of the cap and the upper stem are covered in soft spines. These are pale initially but darken with age.
Stem: Medium-sized, sometimes brownish (never greenish), may be partly hollow.
Smell: Nothing distinctive for identification.
Taste: May be bitter.
Spores: Irregular but roundish. Has clamp connections.
Spore color: Brown.
Edibility: Edible, but not always tasty.
Habitat: Mycorrhizal (living in partnership with tree roots) with either conifers or hardwoods. Fruits singly or in groups.

This species[v] as currently defined is fairly distinctive; its closest look-alikes have greenish stem bases. To be certain, though, look at the spores under a microscope—the clamp connections are distinctive, when considered alongside the non-microscopic characters. Recent genetic work has shown than many European specimens thought to be S. imbricatus actually belong to a close look-alike. The other species is not new, but how often the two have been confused was a surprise. It’s possible similar work in North America will similarly reveal confusion between look-alikes and may define additional species. If there is an unknown species or two hiding in plain sight within the hawk wing, would explain both the extreme variability in taste and the fact that North American hawk wing partners with a wide variety of tree species, both hardwoods and softwoods, even though the European population partners with only trees of a single genus.

Although S. imbricatus is not commonly used by humans in a medicinal context, there is interesting preliminary research suggesting that it could be.

Experiments with mice show that polysaccharides extracted from this mushroom can improve multiple indicators of marrow and bone health and may be able to treat hematopoietic dysfunction as well as some of the more serious side effects of chemotherapy and radiation therapy[vi].

Polysaccharides from hawk wing also reversed immunosuppression that that had been experimentally induced in mice[vii].

Whole hawk wing mushroom[viii], dried and powdered, has been used to relieve the effects of fatigue in mice who had either been experimentally fatigued through forced exercise or had been given chronic fatigue syndrome. The researchers speculate that humans may be able to protect themselves from fatigue by eating hawk wing regularly.

Chemical studies have identified substances in the mushroom known to have anti-cancer, anti-leukemia, and anti-inflammatory properties, though not all of these have been tested yet in living animal subjects or human patients[ix]. A hawk wing extract has slowed breast tumor growth in experimental mice and rendered cultured cancer cells less able to exhibit invasive characteristics[x].

Not all uses are medicinal. Hawk wing can also be used to make a variety of dyes[xi]; depending on how the mushroom is processed, it can yield beige, bluish-gray, and a range of gray-green shades. Other Sarcodon species also produce dyes, the color range depending on the species in question. Most produce grays, blues, or beiges, or some combination of these, but at least one can produce pinkish brown.

It is difficult to find detailed nutritional information for hawk wing. Available sites point out that it is low in both calories and fat, as most edible mushrooms are. Although the flavor appears to vary significantly, when these mushrooms taste good they reportedly taste very good.

There is no recommended dosage yet. People trying to use hawk wing medicinally should seek the advice of a qualified practitioner with relevant experience.

Hawk wing appears not to be toxic and has no known poisonous look-alikes[xii]—although inexperienced foragers can sometimes mix up species that don’t look at all similar to experts. It’s also possible for any eater to develop an allergy or sensitivity to any food. There is no such thing as a fool-proof mushroom, but this one is relatively safe. The only concerning detail is the possibility that hawk wing may be more than one species, and that the hidden species might be extremely bitter, suggesting a real biochemical difference between the two. Although, if the hidden species were toxic, one would expect to hear of more cases of more poisoning. Hawk wing does not have a reputation for sickening anybody. It should be cooked before being eaten, as is true of most mushrooms.