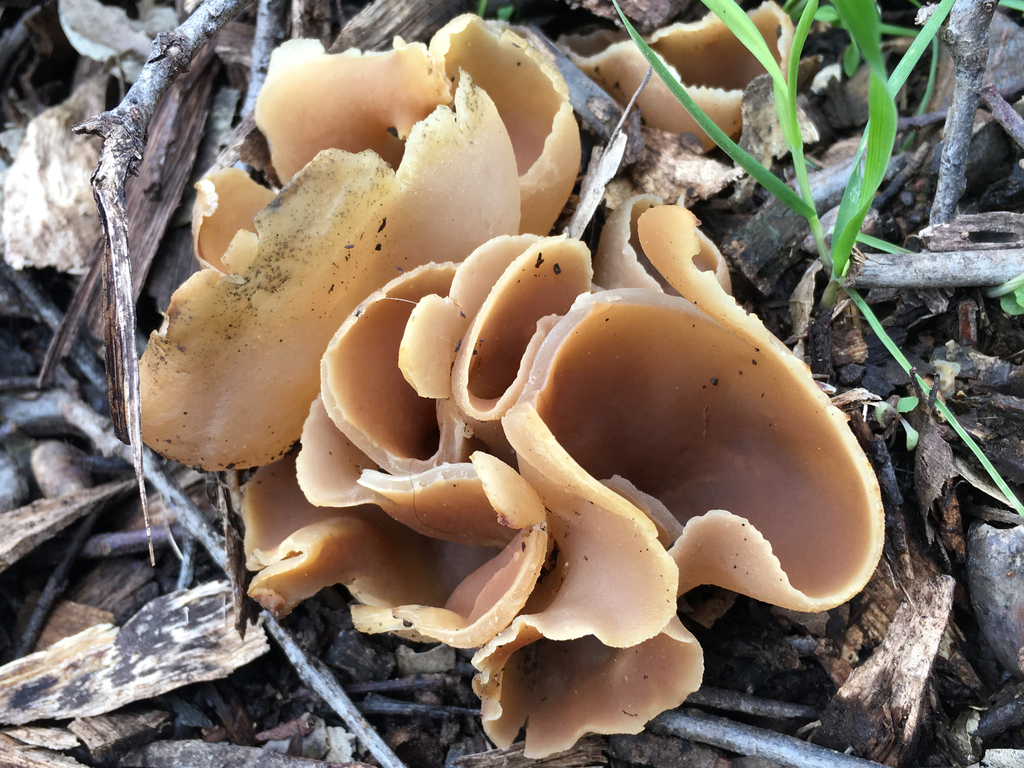 Peziza repanda has no known medicinal benefits, and while it could be edible, no one actually knows whether it is. However, this one is the easiest to identify of a large group of brown cup fungi. For those with an interest in mushroom identification for its own sake, or for those whose garden paths have been taken over by odd-looking brown growths, learning this species is a good place to start.

Fruiting body: Very young specimens are, small, cup-shaped and pale or even whitish. They become flat, irregular, and brownish as they grow larger and older. The outer surface of the cup is slightly fuzzy. The inner or upper surface (where spores are produced) is smooth. The center of mature specimens is usually, but not always, wrinkled. The flesh is brittle.
Stem: Young specimens have a distinct stem, like the stem of a goblet. As the cup grows, however, the stem does not, becoming a mere central attachment point.
Smell: Nothing useful for identification.
Taste: Nothing useful for identification.
Spores: Smooth, elliptical.
Spore color: White.
Edibility: Inedible
Habitat: Eats already-decayed wood, often hardwood logs, but also sometimes wood chips or soil with a lot of decayed wood in it. Fruits singly or in groups.

This species is unusual among brown cup fungi, making identification much easier than for other members of the group[i]. The young, pale, goblet-like stage is particularly distinctive but is often left out of identification guides. Other distinctive features include:

A microscopic examination of the spores may be necessary, since all of the species’ characteristics must be matched to be sure of identification, but it’s often possible to make a good guess without a microscope, something not true for many of the other brown cup fungi.

P. repanda is part of a large group of brown or brownish fungi with the same very general form (an up-turned or wrinkled, roughly circular sheet of tissue) across several genera[ii]. However, a close and methodical examination is usually enough to differentiate this species from anything else—in many cases, the substrate is a good clue for identification.

This species has no known medicinal health benefits. Its edibility is also unknown. Several of its relatives are edible if properly cooked and toxic otherwise, but none are reported to be very good.

There are no known uses, so there is no dosage.

Edibility and toxicity have not been assessed for this species, however it does have relatives that are toxic if not cooked. It could also possibly be confused with the pig’s ear mushroom (variously called Discina perlata, Gyromitra perlota, or several other names), which is edible[iii]. In other words, rather than having toxic look-alikes, this species is a potentially toxic look-alike for something else.