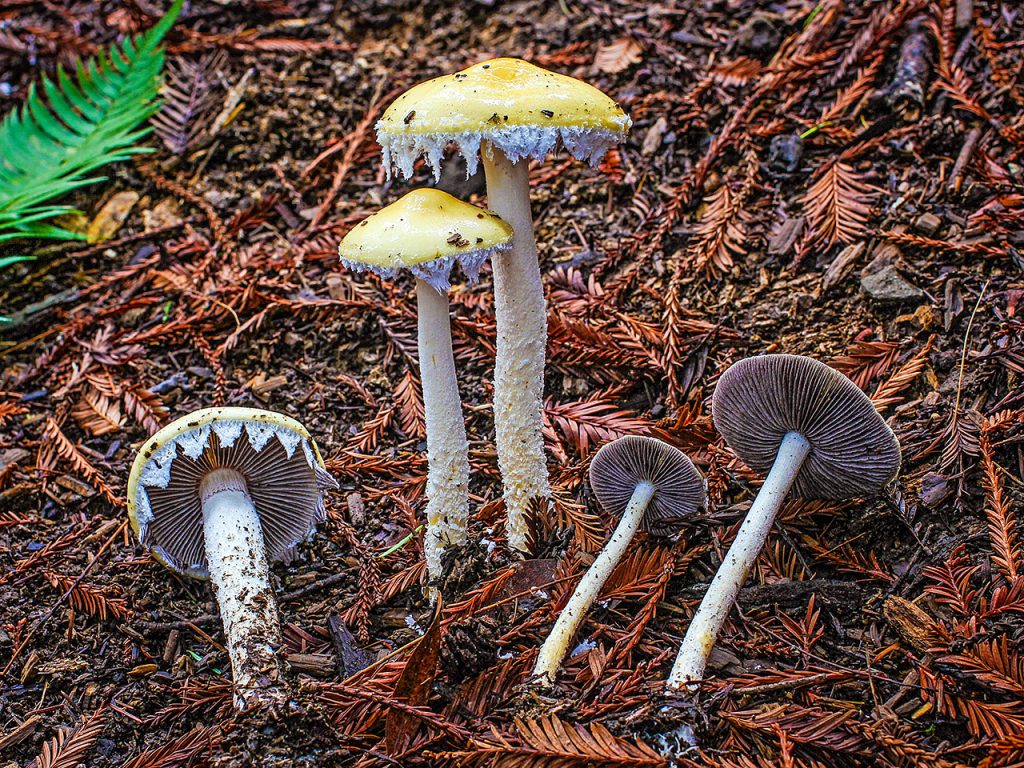 Stropharia ambigua or questionable stropharia earns its name because the distinctive ring is not always present, making identification a little challenging.  One can imagine a pair of mycophiles in a forest somewhere arguing over whether the mushroom they’ve found is really a stropharia. “I don’t know,” one of them says, “It’s questionable.”

The stropharias—or, perhaps, stropharioids, given that the old Stropharia genus has been divided and redefined—are a group of gilled mushrooms with slimy caps and, early in development, a partial veil covering the gills. As the stem lengthens and the cap expands, the veil tears, leaving a characteristic ring or skirt of tissue around the stem and sometimes tatters of veil remnants around the edge of the cap[i]. The group is also known as the roundheads.

The species is interesting-looking, even beautiful, with a lovely, brilliant yellow cap. It is also edible, though not popular as food[ii]. Some people suspect medicinal benefits[iii], but there is no scientific research on the issue.

Cap: Medium-size to largish, bell-shaped to flat, with the edge shaggy or ragged with remnants of the partial veil, especially in younger specimens. The upper surface can be pale yellow, rich yellow, or brownish yellow, and is smooth and, when fresh, slimy. The flesh does not change color when sliced.
Gills: Attached or semi-attached to the stem. When young, it is pale gray to white, then purple-gray or purple-black with white edges.
Stem: Long, thin, tube-shaped, dry. May or may not have a ring partway up. Above the ring (or where the ring would be) the stem is smooth. Bellow it, the stem is shaggy, except in some older specimens. White or whitish.
Smell: Strongly soil-like or “mushroomy.”
Taste: Strongly soil-like or “mushroomy.”
Spores: Ellipsoid, smooth but with inclusions.
Spore color: Purple-brown to blackish.
Edibility: Edible, but not popular.
Habitat: Eats dead woody debris, including wood chips. Prefers conifer wood, but can eat hardwood as well. Fruits alone or in groups.

This species growth mostly in western North America, where it is very common. It is mostly absent elsewhere[iv].

The questionable stropharia is fairly distinctive-looking, with its shaggy stem and raggedy cap edge, but there are still possibilities for confusion, especially for the rushed or the unwary.

The stropharioid group has certain features in common with the amanitas, notably the ring around the stem. The amanita group includes some hallucinogenic species and some dangerously toxic, even deadly species, as well as a few edibles, so mistakes can be serious. Some amanitas are yellow and could be mixed up with the questionable stropharia. However, amanitas initially have a universal veil as well as a partial veil, and most (not all) have remnants of the universal veil at the stem base and on the top of the cap. Stropharias have no universal veil. There are other, more subtle, differences to pay attention to as well, so that proper identification is, with care, not difficult.

Most stropharioids are not yellow and are therefore relatively easy to differentiate from their questionable relative. There are some other yellow or yellowish stropharioids that could be mixed up with this one[v], but their resemblance to the questionable one is still only slight.

The questionable stropharia is safely edible for most people—though see the note under Toxicity. The very earthy flavor appeals to some eaters, but very much does not appeal to others. There is no scientific evidence of any medicinal benefits, nor is this a traditional medicinal species.

A related species, the king stropharia or wine cap (Stropharia rugosoannulata)[vi] is a choice edible and is thought to have some medicinal value, so some writers speculate that the questionable stropharia may also be medicinal. But a species’ biochemistry can’t be predicted from that of its relatives; the stropharioid group also includes some toxic species[vii]. Although the existence of a medicinal relative is a good reason to study a species for medicinal potential, related mushrooms should never be treated as interchangeable.

Questionable stropharia has been confirmed as useful in making dyes; it produces a range of gray-greens and browns, depending on how it is processed[viii].

There is no established medicinal uses, therefore there is no recommended dose. More seriously, the questionable stropharia could be mixed up with one of the yellow amanita species, some of which are toxic or hallucinogenic.

Some writers claim questionable stropharia is edible. Others claim it is toxic. Because the sources claiming edibility include first-person accounts of eating the mushrooms, the species in described as edible here. However, no explanation are readily available for the claims of toxicity, or for why some people can eat the mushrooms anyway. Many mushroom species are safely edible under some circumstances but not others, or cause reactions in sensitive individuals but not for everybody, and it’s likely this is another such case. Or they might not be toxic at all. But unless readers can find some kind of explanation for the toxicity claims, it’s best to leave this one off the plate.