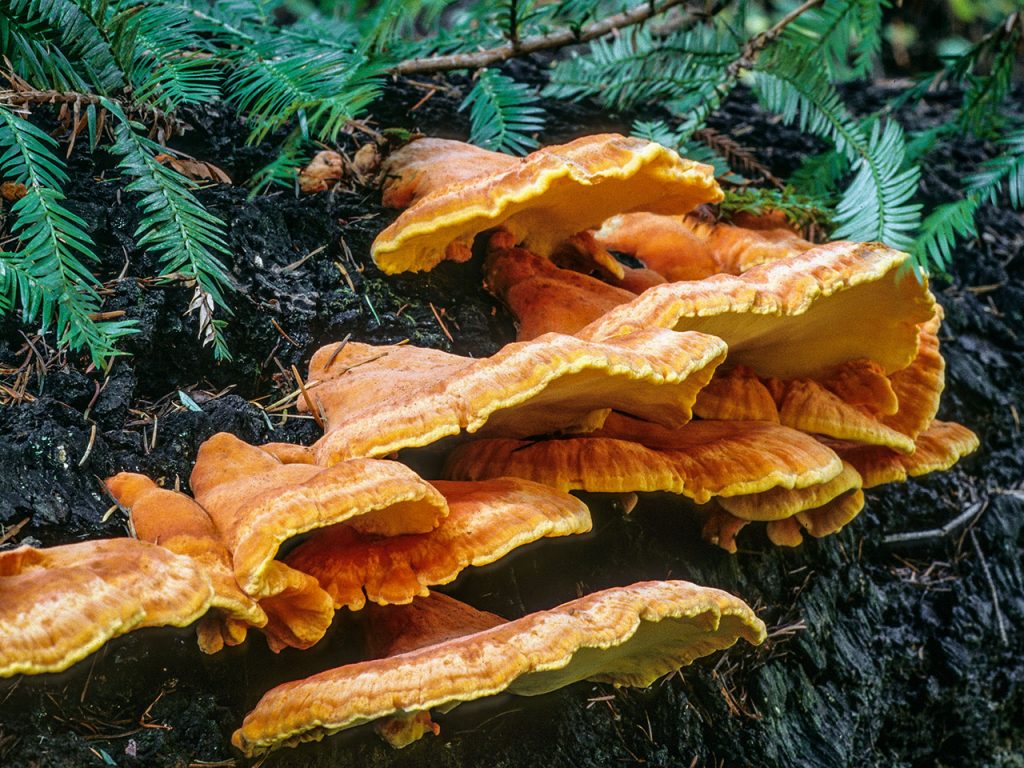 It’s true that many of the chickens look exactly alike—yellow, irregularly-shaped fans. L. conifericola is one of these. Figuring out which one you’ve got often requires taking note of where the mushroom is and what it’s growing on. But that does not mean that all these chickens are biochemically identical. The fact of the matter is, we don’t yet know much how the different species vary.

They are all edible, with some caution. They may or may not be medicinal.

Cap: A large cluster of thin, medium-to-large, roughly fan-like caps form a single fruiting body. The color can vary or fade, but is usually alternating bands of yellow and orange. The flesh is yellow and doesn’t change color when cut. The caps are not woody.
Gills: There aren’t any gills. The spores come from small pores on the yellow underside of each cap. This under surface does not bruise when handled.
Stem: Mostly or completely stemless.
Smell: Nothing useful in identification.
Taste: Nothing useful in identification.
Spores: Smooth and ellipsoid.
Spore color: White.
Edibility: Good, but take caution.
Habitat: Eats living or dead conifers and fruits from the trunks singly or in groups (remember that a single mushroom is a cluster).

Chickens as a group are easy to recognize by their color—most species, including L. conifericola, are orange and yellow, and few other shelf fungi are. L. conifericola can be recognized within the group by its range (west of the Rockies) and its diet of conifers[ii].

There really aren’t any close look-alikes, except for other chickens, but there are some more distant look-alikes. The closest is probably the dyer’s polypore (Phaeolus schweinitzii)[iii], which is often yellow or orange when young, though older specimens turn brown. It, too, likes conifers, and does grow in western North America (among other places). But it usually grows close to or on the ground, and in its early, yellow stage, the pore surface bruises when handled.

Other frequently-cited potential sources of confusion[iv], such as golden chanterelles, jack-o-lanterns, and northern tooth, are only an issue if a forager notes their color but ignores their shape. None of these has a pore surface—instead, they have gills, ridges, or teeth. Plus there are other distinct differences of shape and growth habit. Thus, a careful examination of any of these mushrooms would note the absence of pores and rule out chicken immediately.

Hen-of-the-woods (Maitake) does not resemble chicken-of-the-woods, but the names are similar enough to cause confusion to the unwary reader.

Almost all research on the potential benefits of chicken-of-the-woods refer to L. sulphureus. What’s not clear is whether the studies actually involved that species, or whether the researchers thought all chicken mushrooms were L. sulphureus. For a long time, that’s what everybody thought.

So it’s possible L. conifericola actually was the species in some of the relevant studies. Even in cases where it obviously wasn’t, the two species are related and could be biochemically similar. However, it’s a mistake to assume all chickens are biochemically identical. They might have very different medicinal and nutritional properties, and some might have little benefit at all. We really don’t know much about L. conifericola except that it is related to species that show promise.

The most obvious benefit of any chicken-of-the-woods is that these mushrooms are edible and taste good. Most taste very good, and are close enough to chicken meat in both taste and texture to substitute for it in recipes. L. conifericola is something of an exception; it is reportedly a little sour[v]. There are also a few safety concerns with all chicken mushrooms (see note under Safety).

Preliminary research suggests chicken-of-the-woods mushrooms contain substances with properties that function as antibacterials, anti-carcinogens, anti-oxidants and anti-inflammatories[vii]. These were mostly animal studies or chemical analyses, plus a few preliminary clinical studies, almost all of them involving concentrated extracts. Whether eating whole mushroom can deliver a medicinal dose of anything hasn’t been tested. It’s likely it cannot.

The medicinal dose, if any, is not known.

Chicken mushrooms are one of those groups known to be edible while nonetheless making some people quite ill. The problem is most likely human variation, at least in part—some people are much more sensitive to certain toxins than others. But it probably doesn’t help that not everybody knows the difference between the various chicken species, meaning that if some of them are more toxic than others it would be hard to tell, because it’s not clear who ate what in all cases. An early idea was that what kind of tree the mushroom is feeding on makes a difference, and many writers still warn foragers away from chickens growing on certain species, but further study has cast doubt on that idea[viii]. L. conifericola appears to be responsible for fewer poor reactions than the other chicken species in its range. It’s still best to always cook the mushroom well, and to never harvest specimens that have begun to harden or become brittle. That means harvesting young specimens or, at times, only the more tender outer edge.

It’s important not to make the mistake of assuming that all orange or yellow mushrooms are chicken mushrooms. They aren’t—and some other orange mushrooms, such as Jack-a-lantern, are poisonous. Although chicken mushrooms are considered “fool-proof” as far as identification goes, that doesn’t mean a careful examination of the specimen is unnecessary. Beginners especially might overlook details that seem obvious to more experienced foragers. The point is not to be afraid of mushrooms but to be careful.