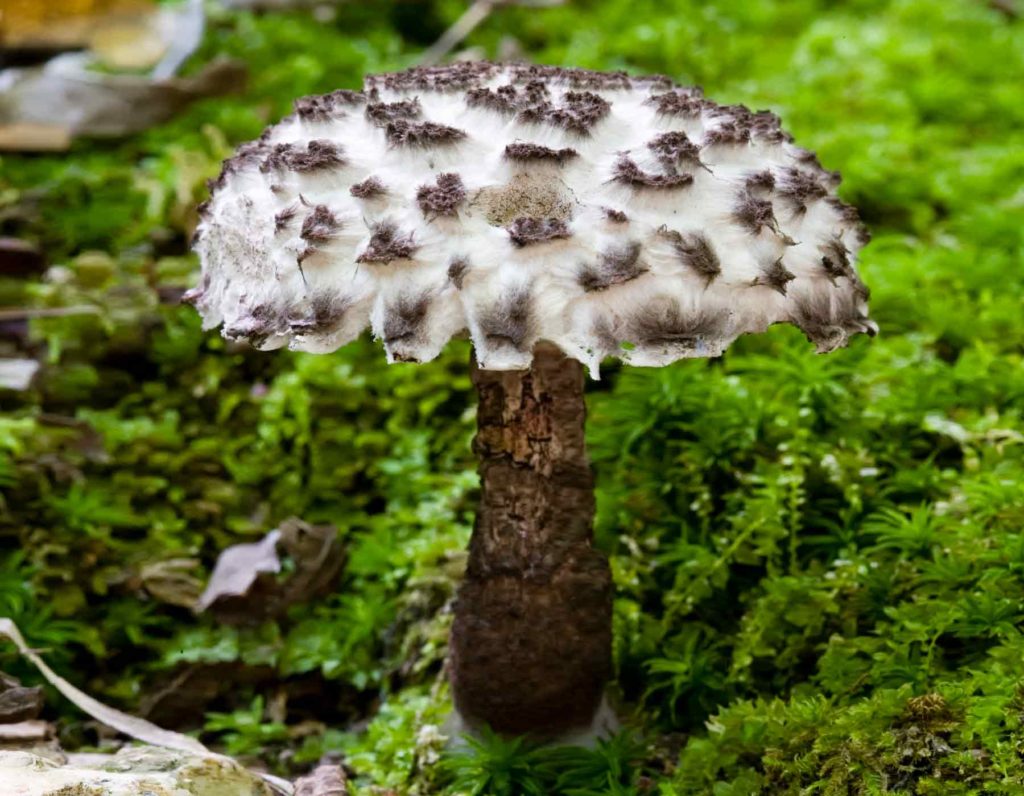 Old Man of the Woods blends in with the background landscape of the woods and forests and can be sometimes challenging to find. As it ages, it becomes darker and resembles a pine cone rather than the mushroom and is quite resistant to decay, unlike other fungi in the Boletaceae family. It appears as pale with black woolly tufts dotted across the surface of the cap, like a cracked black and white dome.

Old Man of the Woods is native to Europe and North America. Also found in Canada, Japan, Iran and Taiwan. Rarely found in the United Kingdom, and may preferentially grow in Northern Europe. This mushroom is edible, preferably harvested when young; although it may have little culinary value.

Cap: 6-12 cm in diameter; can reach 20cm and woolly/hairy when young. With age the convex cap becomes flatter and firmer and is covered with dark grey to black pyramid-type protrusions, appearing as scales against the creamier-tan background. The flesh is white, but when exposed to air will turn pink, orange-red and then slowly dark grey or black.
Gills: Gills are absent, tubes and pores found under the cap (described below).
Stem: 1-2cm in diameter’ up to 14cm tall. Colored grey with tufts. The stem may have remains of skirting from the cap from when young.
Smell: Non-descriptive.
Taste: Non-descriptive; some describe as earthy.
Pores: As a boletus mushroom it has porous and spongy tubes with large pores; spores develop inside these tubes. The pores under the cap are hexagonal, colored off white and become grey with maturation.
Spores: Ellipsoidal; smooth, may have ridges or short protrusions.
Spore color: Dark brown to black.
Edibility: Edible.
Habitat: Common in woodland; usually found in deciduous woods; can be found under conifers. Mountainous and alpine areas. Fruits late summer to early fall – August to October. In Southern, Central USA, such as Louisiana, it may be found during hot periods from May to September. Often grows alone and because it is mycorrhizal (the tree and mushroom contribute to each other’s existence), it will not be found growing on dead or decaying material.

Old Man of the Woods Look-a-likes

Old Man of the Woods is easily identifiable. It is a tough mushroom standing erect with dark woolly/fluffy tufts (scale-like) covering the cap. If gills are present, it is the wrong mushroom and could be poisonous; please note: if the underside of the cap is pinched and bruises blue, it can be a toxic Boletes. Mushrooms that may be confused with Old Man of Woods include, Strobilomyces confuses which has a smaller cap and Strobilomyces dryophilus which is coloured pink – grey. If in doubt always check with a professional mycologist.

There is not sufficient scientific evidence to support a role for Old Man of the Woods to promote health benefits. This does not suggest that this mushroom is not healthy, instead there is a lack of scientific evidence in support of it medicinal purposes,

Its edibility is debatable (as already discussed). Opinions are mixed and very subjective, some suggest sautéing with butter, encouraging a taste very much like a button mushroom.

Old Man of the Woods Mushroom Toxicity & Side Effects

There are no scientific reports that Old Man of the Woods is toxic. Always be cautious when trying a new mushroom for the first time and if in doubt take professional medical advice before consuming.