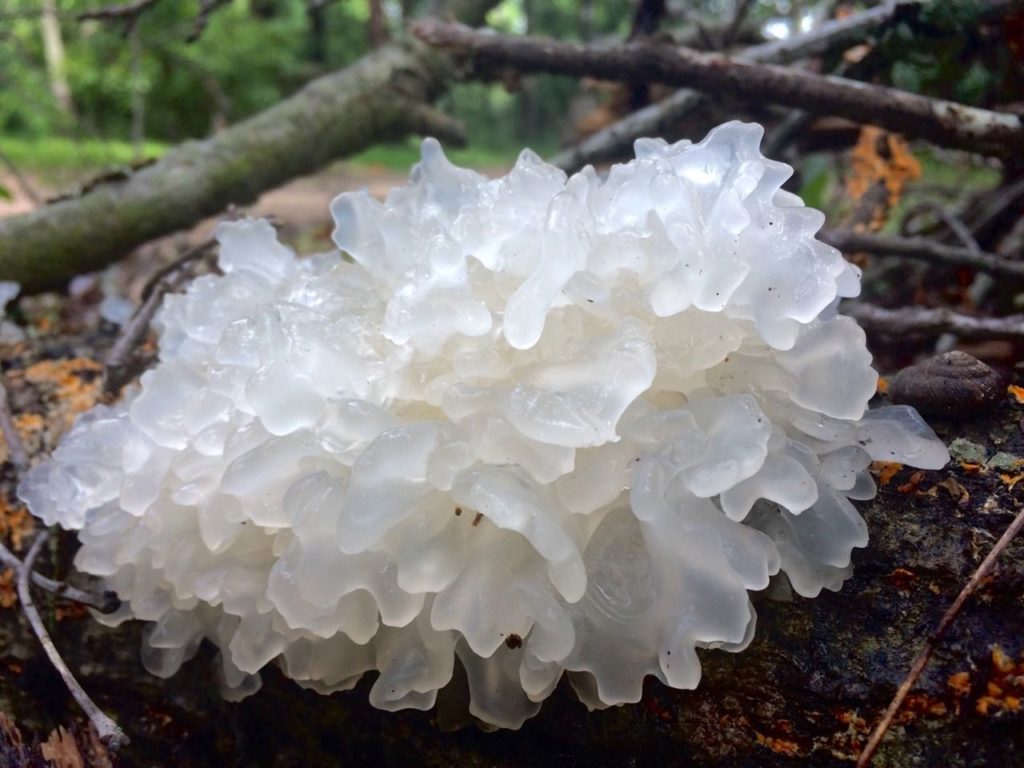 The Tremella species belong to the family known as jelly mushrooms, due to the formation of gelatinous fruit bodies. Tremella fuciformis, is in the order of the Tremellales and the family of the Tremellaceae. It is a tropical and subtropical edible mushroom [1.] also known as snow fungus, silver ear fungus, snow ear, white jelly mushroom, white jelly-leaf and white auricularia; it is known also as yiner or baimuer in China [2.]. First identified in Brazil, Tremella fuciformis is now cultivated widely and can be found throughout Asia; it is one of the most cultivated fungus in China. Tremella fuciformis is found on the dead and fallen branches of broad-leaved trees.

From a dietary perspective, Tremella fuciformis is nutritiously rich in polysaccharides, proteins and fiber; in addition to various vitamins and minerals [3.]. The Tremella fuciformis polysaccharides (TPS) have proven to have positive biological effects, including but not limited to anti-tumorigenic, anti-inflammatory, memory reparation, cancer-therapy side-effect modulation and anti-aging.

Fruiting body: Whitish in color; almost appearing transparent; jelly-like but quite firm; quite large in size up to 7.5cm across and up to 4cm high; the fruiting body is made up of attractive lobes.

Edibility:  Edible; one of the most popular fungi to eat in China.

The scientific evidence supports the role of the polysaccharides of Tremella fuciformis as a therapeutic in cancer. The anti-tumour properties may arise from promotion of the natural immune system by Tremella fuciformis. These benefits led to the “Tremella Polysaccharide Enteric-coated Capsules” being approved in 2002, by the Chinese Food and Drug Administration (SFDA). These capsules are used to treat cancer patients following chemotherapy or radiotherapy- induced leukopenia [2.], a condition that sees a reduction in white blood cells; these cells are important for protecting against infection and an improvement in side-effects is seen with use of the capsules.

A study in mice concluded that following UV exposure, skin structural changes lessened including collagen damage, in the presence of Tremella fuciformis. Critically, enzymes involved in protective anti-oxidant pathways were also increased [8.]. The authors of the study proposed that Tremella fuciformis supplements could benefit the function of the skin.

Hot water extract of Tremella fuciformis in vitro on cells of neural crest origin were shown to have increased neuronal differentiation activity and neuronal outgrowth, with increased neurite length observed when compared to control. Furthermore, protection against neurotoxicity was observed in an in vitro  Alzheimer’s disease model in the presence of the Tremella fuciformis extract; cells treated with amyloid beta, the protein considered to be highly involved in the degenerative pathology observed in Alzheimer’s disease, showed diminished levels of toxicity in the presence of Tremella fuciformis [1.]

Memory impairment can result from various conditions, including but not exclusively Alzheimer’s disease (AD). Trimethyltin (TMT) is a powerful neurotoxin that impairs learning and memory in rats, repeated treatment with extract from Tremella fuciformis reduced the TMT-induced changes in learning and memory and also protected against loss of cholinergic neurons, when compared to mice that did not receive Tremella fuciformis [10.]

Following pre-treatment with a polysaccharide extract from Tremella fuciformis, mice given gamma irradiation saw a 50% increase in survival and at 74mg/kg, haemoglobin levels increased and red and white blood cells were significantly restored within 18 days. Furthermore, genotoxicity levels were reduced in the mice that received Tremella fuciformis when compared to irradiation only. This provides evidence for Tremella fuciformis as having protective properties against radiation [7.]

Glucuronoxylomannan (AC) extracted from the fruiting bodies of Tremella fuciformis and fed to mice produced a dose-dependent reduction of plasma glucose and plasma cholesterol. Tremella fuciformis treatment led to reduced liver glycogen and increased stored total lipid in adipose tissue and increased the plasma insulin levels; important in regulating the metabolism of the glucose. Significantly, in a diabetic mouse model hypoglycemic activity was also seen (50mg/kg) [11.]. Further work looking at obese mice administered with exopolysaccharides from Tremella fuciformis showed significant hypoglycemic effects in addition to insulin sensitivity and a decrease in blood triglycerides [12.]. This is promising research for the use of Tremella fuciformis as a therapeutic in non-insulin dependent diabetes.

Rats that were fed a diet of powdered Tremella fuciformis for 4 weeks showed a significant decrease in total serum cholesterol levels when compared to the controls. A significant decrease in LDL (the bad cholesterol) was observed but this was not seen in this study for HDL (good cholesterol); therefore, the decrease in cholesterol was attributed to the reduction of overall LDL. Furthermore, an increase in the excretion of neutral fecal sterioids and bile acids were seen [13.]. This was supported by subsequent studies with similar results which also saw physiological changes occurring with increased intestinal tissue size and weight [14.].

There are no present one-dose fits all. It is suggested that Tremella fuciformis grown in different countries may contain different concentrations of the bioactive ingredients and therefore, have different biological effects [4.] [15.]. Studies have also shown variable doses providing specific effects in different models. The extraction process of the biological components is commonly by hot or cold-water extraction. Hot water extraction may yield the highest level of polysaccharides and be more effective in cancer cell inhibition whilst cold water extraction, may yield highest levels of protein and be more effective in immune-modulation [15.].

Always seek medical advice if pregnant before taking any food supplement. Whilst there is evidence to support the benefits of taking Tremella fuciformis it is not a replacement for traditional treatment it is important to seek and adhere to medical advice before supplementing the diet for medicinal effects.

Presently it doe’s not appear there are any side effects or toxicity related to Tremella Fuciformis. However; it’s important to remember if you are taking any medication supplements can interfere with them. Consult your doctor before taking any herbal supplements.