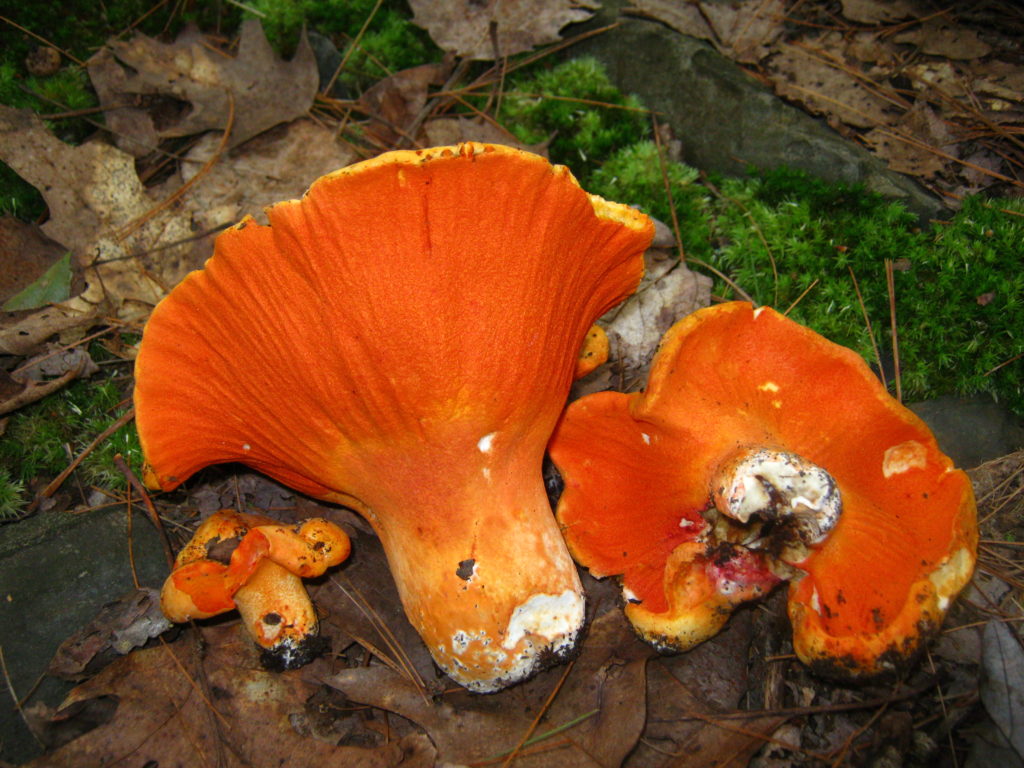 The lobster mushroom[i] or lobster of the woods is not actually a mushroom; it is the combination of a mushroom and a second fungus that has grown onto and into the mushroom, giving it a hard, red shell. The shell is a parasitic fungus called Hypomyces lactifluorum. The host mushroom is always some species of either Russula or Lactarius. The two most common hosts, by far, are Russula brevipes and Lactarius piperatus (though the latter may actually be a group of very similar species).

H. lactifluorum is edible, as are both R. brevipes and L. piperatus, so either combination is also edible. In fact, L. piperatus by itself is too spicy for most people to enjoy, but the presence of the parasite removes the heat, thus making the combination more edible than the host alone. Whether it’s possible for H. lactifluorum to parasitize a toxic species seems unclear, especially since it’s often impossible to be sure what the host mushroom is—but if possible it must be very rare, because lobster mushroom is a popular edible with no known history of poisoning anybody[ii].

There is, in fact, some evidence to suggest that lobster mushroom does not biochemically resemble the host species; it is not that the host simply has a parasitic crust on it, for while the mushroom is crusty, the interior is also a mix of tissue from the two species, and the parasite even radically alters the biochemistry of the host tissue that remains[iii].

Lobster is not well-known as a medicinal mushroom, but that does not preclude it having undiscovered benefits, and it is considered a healthy food.

Cap: Hard, red or orange exterior that develops pimple-like structures with age. The interior flesh is usually white or reddish and very dense. The shape is very variable, since the host mushroom can be either of two species and the parasite deforms the mushroom to a greater or lesser extent. The cap is often cracked and irregular.
Gills: There may not be gills, since the host mushroom is rendered sterile by the parasite. The parasite’s own spores emerge from the pimple-like bumps on the surface.
Stem: Very variable, but may be quite short or nearly absent.
Smell: No distinctive scent.
Taste: Nothing helpful for identification. When prepared as food, can taste vaguely nut-like or even lobster-like (an odd coincidence, given that the color also suggests lobster).
Spores: Almost impossible to collect.
Spore color: Almost impossible to collect.
Edibility: Considered choice.
Habitat: Appears in the same habitat as either host species.

Lobster is difficult to describe because of its extreme variability, but the color and surface texture are distinctive, so experienced foragers regard it as unmistakable[iv].

Lobster mushrooms are a good source of both Vitamin D and iron and, to a lesser extent, of calcium.  They contain a small amount of dietary fiber and very little protein. But as with other mushrooms, lobster has a very high water content and so must be eaten in large quantities to become a significant source of nutrition. Most people eat mushrooms in small quantities as an accent to a larger dish. The most striking health benefit of this mushroom may be what it does not have; much sugar or fat. It’s a good way to add flavor without adding a lot of calories.

There is no information on medicinal benefits, though some writers claim that benefits attributable to mushrooms generally (such as antioxidant properties) also apply to lobster mushroom. They could be right.

Because no lobster mushroom product is sold for medicinal purposes, nor have any medicinal benefits of the fresh mushroom been confirmed, “dose,” as such, is not relevant. The fungus may be eaten freely as food.

There are no known side effects or toxic properties, although the possibility that the parasite could colonize a toxic host, plus an incomplete understanding of the relationship between parasite and host leaves some open questions. In any case, as with any food, it is best to try lobster mushroom for the first time in moderation; allergies or hypersensitivities are always possibilities and hard to predict. It would not do to discover a new allergy only after feasting on a new food!