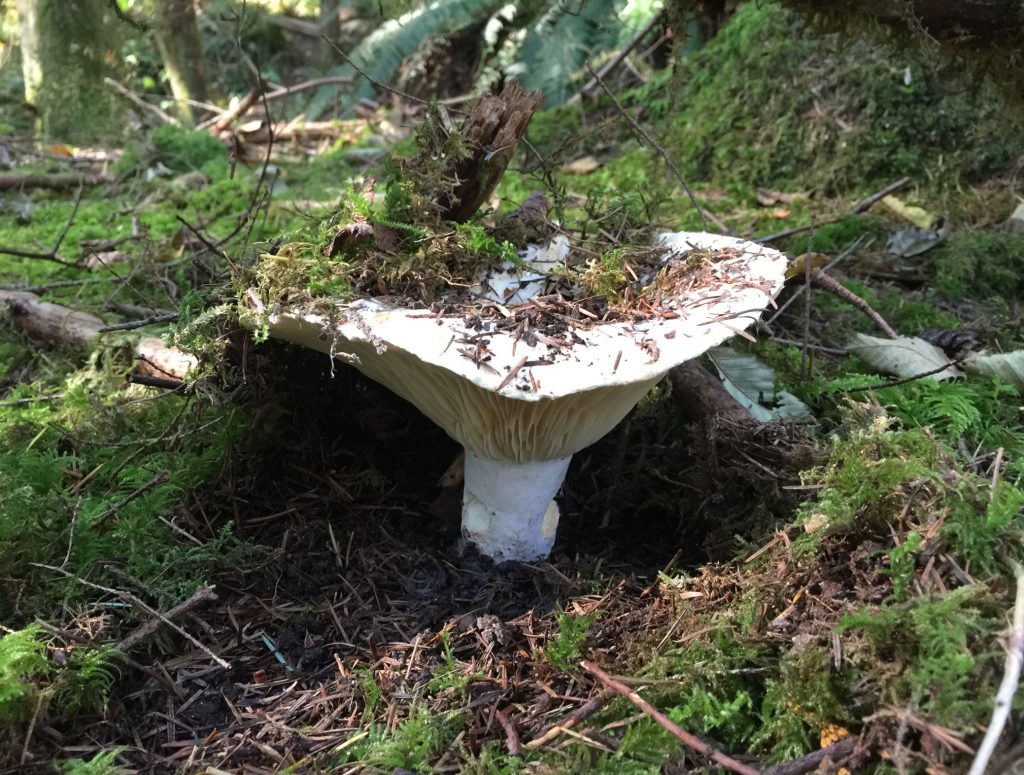 Russula brevipes, also known as the stubby brittle gill, short-stemmed Russula, and short-stalked white Russula, is a large, white, funnel-shaped edible mushroom with a short stubby stalk and the propensity for injury‐triggered bruising. R. Brevipes is mycorrhizal with several tree species and can be found widely distributed throughout the North American continent.

This species was originally documented in the State of New York in 1890 by the American mycologist Charles Horton Peck. Since then, the naming and taxonomixation of Russula brevipes have been surrounded by much confusion.  Various mycologists in the 20th century have called this mushroom Russula delica, an already existing species endemic to the European region described by Elias Fries in the 19th century. To add more fuel to more European-themed confusion, Russula Brevipes appears to be identical to several European specimens, but in Europe, they are known as Russula chloroides. Other mycologists have suggested that Russula Brevipes is not a single mushroom, but rather a complex of up to four distinct mushrooms. As such, it is clear that the taxonomy relating to this species is not as straightforward as one would like it to be.

With regard to etymology, it is certainly much more straight forward. Its epithet “brevipes” means short-footed in Latin (Brevis “short” and pes “foot”), which perfectly and logically emphasizes its rather short stature.

If one knows or has heard anything about Russulas, which are also colloquially known as Brittlegills, then one is surely aware of how notoriously difficult and sometimes even impossible they are to differentiate from one another. This is especially true when dealing with Russula brevipes, which is essentially thought to be an amalgam of several North American species that are so alike that they are impossible to tell apart unless one relies on micromorphological differences in spores, cystidia, and the pileipellis. Below is offered a detailed description of what is regarded as a “typical” sample of Russula brevipes.

Cap: The cap is very large, measuring 6 to 20 cm. When young, the cap is convex, has a central depression, and an inrolled outer limb and margin. With maturity, the cap becomes broadly vase or funnel-shaped with downturned or flaring margins. The cap surface is dry and unpolished with a suede-like or wooly-like texture; the surface may also become fissured with age. The color of the cap is variable; initially, it is white or creamy, but with age, it takes on a tan, brown, or orangish-brown discoloration.

Additionally, the cuticle, which refers to the outermost layer of the cap, is highly adherent and not easily peeled. Although some mycological literature lists this feature as an identifying feature, it is not advised as it is a highly subjective characteristic that is likely to vary substantially.

Lastly, despite its prominent cap it often fails to emerge above the duff layer of the forest due to its short stem, only appearing as a small bump on the forest floor.

Flesh: The flesh is white, oftentimes “bruising” to a dull yellow or brown color when damaged or cut. The flesh is brittle and crumbles easily.

Gills: The gills are decurrent and extend down the stem slightly. They are crowded or close, sometimes forked to with veins in between gills. Initially, the gills are white or creamy. Sometimes a blue-green tinge can be appreciated at the point of junction between the gills and the stem. As mentioned earlier, gills of Russula brevipes demonstrate the injury‐triggered bruising phenomenon, discoloring to a brownish color when damaged in any way.

Stem:  The stem is very short compared to the enormous cap, as well as sturdy, thick, and solid, but can become hollow with old age. The surface of the stem is white, dry, smooth, and similar to the gills stains a brownish color when bruised. It measures 2.5-8cm long and 2.5-5cm thick.

Spores: Microscopically the spores of Russula brevipes measure 8-11 by 6.5-10µm and are broadly elliptical, ornamented with scattered warts, and amyloid.

Spore Print: The spore print is white to cream.

Smell: This species does not have a distinguishing smell. Young, fresh specimens may possess a mildly fragrant odor, while mature, old specimens may have a mildly foul odor.

Flavor and Edibility: Although Russula brevipes is considered edible, its fruiting body is disagreeable-tasting with a moderate to strong acrid taste. However, when this fruiting body is parasitized by the ascomycete Hypomyces lactifluorum it transforms into what is known as Lobster mushrooms, a choice edible prized by indigenous peoples of Mexico.

Habitat: This species grows in mycorrhizal associated with a large variety of hardwood forest trees. It can be found growing solitary, scattered, or gregarious at the bottoms of oak, conifer,  pine, and Douglas fir trees to mention just a few.

Range: Russula brevipes has a widespread distribution in North America (US, Canada, Mexico), and possibly throughout the rest of the world (remember Russulas are difficult to differentiate on morphological features and without DNA studies proper identification and re-classification are difficult to do).

Fruiting Season: In North America, Russula brevipes fruits during the summer and fall months, most commonly from July to October.

Russula brevipes, being just a large white mushroom, has quite a few look-a-like species and its troublesome taxonomy makes matters worse. Therefore when attempting to identify this species careful attention should be paid to gill color, staining, spacing, and forking. Microscopic features, if available are also helpful.

One important species to differentiate from our Russula is Lactarius deceptivus, as it is often found growing alongside it. Differentiation can be rather easily done, it does not rely on any macro or micromorphological feature but rather on the fact that Lactarius deceptivus produce drops of “milk” or latex when injured.

Last point worth mentioning, Russula brevipes was erroneously known as Russula delica, which is a completely separate European species.

Although Russula brevipes is considered edible, fresh samples can cause mild and self-limited gastrointestinal upset that can present with nausea, vomiting, and diarrhea.

Although not currently used for medicinal purposes, Russula brevipes is known to contain a group of organic compounds known as Sesquiterpene lactones. Although not much is known about them for sure, they are thought to possess anti-inflammatory and anti-neoplastic properties.

[iv]      Russula brevipes – short-stalked russula. Mushrooms Up! Edible and Poisonous Species of Coastal BC and the Pacific Northwest. (n.d.).