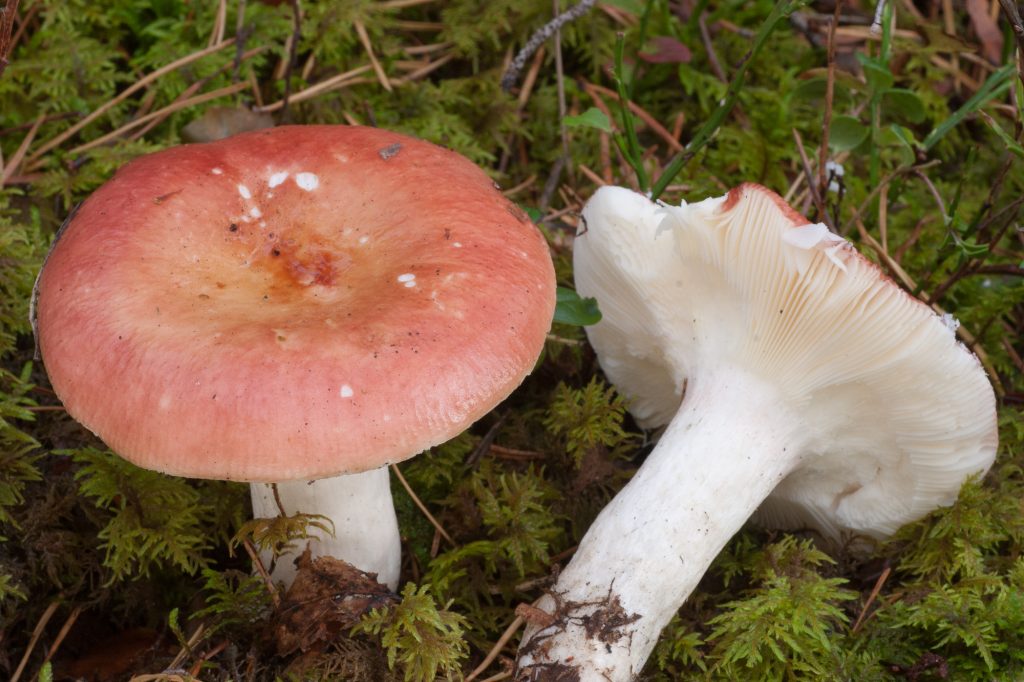 Russula paludosa is a large, brightly colored, and edible member of the Russula brittlegill family. This mushroom is most commonly found in damp and boggy coniferous forests of Scandinavia and Northern Europe, and although certainly found in the northern parts of the United Kingdom, Central Europe, and possibly North America, it is considered uncommon or even rare in these regions.

Furthermore, Russula paludosa can easily be confused with the Russula emetica (The Sickener) as they share a common coniferous habitat and geographic distribution. This mix-up, although not life-threatening, will lead to severe gastrointestinal upset and dehydration. As such being familiar with this species is helpful when out foraging for Russulas.

Russula paludosa was first described by the German mycologist Max Britzelmayr in the 1890s who classified it as a Russula and termed it Russula paludosa, and rather uncommonly for most mushrooms, this species has retained its name and taxon since then.

The generic name Russula means red or reddish, a cap color that this specific species possesses. While the epithet “paludosa” means boggy, swampy, or marshy, which refers to the environment in which this species most commonly grows.

The following are the micro- and macromorphological characteristics of Russula paludosa:

Cap: The cap of R. paludosa measures between 5 to 20 centimeters in diameter. The shape of the cap is convex, but with age becomes flat with a shallow central depression. The cap has a distinct characteristic red or crimson color with occasional yellowish or orange patches, particularly in the center. The skin of the cap can be easily peeled from its edge to one-half or three-quarters of the way to the center.

The margins of this species become striate ( fine, vertical grooves and ridges) with age.

Flesh: The flesh of this species is firm, brittle, and white to light pink. As Russula paludosa matures, its flesh becomes grayish as well as soft and spongy.

Gills: The gills of R. paludosa are adnexed and narrowly spaced (crowded). When young they are a cream color, but with age turn a pale brownish yellow color.

Stem:  The stem of this species measures 4 to 15 centimeters in height – this is uncharacteristically long when compared to the size of its cap – and 1 to 3 centimeters in diameter. It is relatively smooth and cylindrical with a central swelling and a slightly wider base. Lastly, the stem is mostly white and flushed with pink.

Spores: Microscopically the spores of Russula paludosa are ellipsoidal to globose in shape. They measure 8-10.5 by 7-8µm in size and possess 1.2µm tall wart-like projections some of which are joined at their apices by connecting lines forming a reticular network.

Spore Print: The spore print of this species is deep cream to dark ochre.

Smell: This species  does not have a distinctive odor.

Flavor and Edibility: Although it does not have a distinctive taste, Russula paludosa is completely edible and is mostly consumed in Scandinavian countries. Elsewhere in the world, where its numbers are sparse, care should be taken when consuming this species as it can easily be confused for poisonous red-capped mushrooms such as Russula emetica (The Sickener) which bare a striking resemblance and share similar habitats.

Habitat: This species grows in mycorrhizal association with coniferous trees such as pines and birch, and prefers damp and boggy growth environments.

Range: Russula paludosa is most frequently found in Scandinavia countries, such as Finland, Sweden, and Norway. Although reports of specimens from northern parts of the United Kingdom, mainland Europe, and possibly North America, have been reported, this species is considered rare in these regions.

Fruiting Season: This species fruits during late summer and fall months, most commonly from August to October.

The most important distinction is between this specie and The Sickener, Russula emetica. The differentiation of these two species from one another is quite difficult. Russula paludosa is slightly taller, with a larger cap and spores.

Another specie that needs to be differentiated is Russula nobilis, also known as the Beechwood Sickener. The latter species retains the convexity of its cap into maturity, unlikely Russula paludosa whose cap becomes flattened with age.

Russula paludosa is completely edible and is consumed widely in Scandinavian countries. The only safety concern with this species, once again, is its close resemblance to several red-capped mushrooms such as Russula emetica and Russula nobilis which are known to cause self-limited gastrointestinal upset that can present with nausea, vomiting, and diarrhea if consumed.